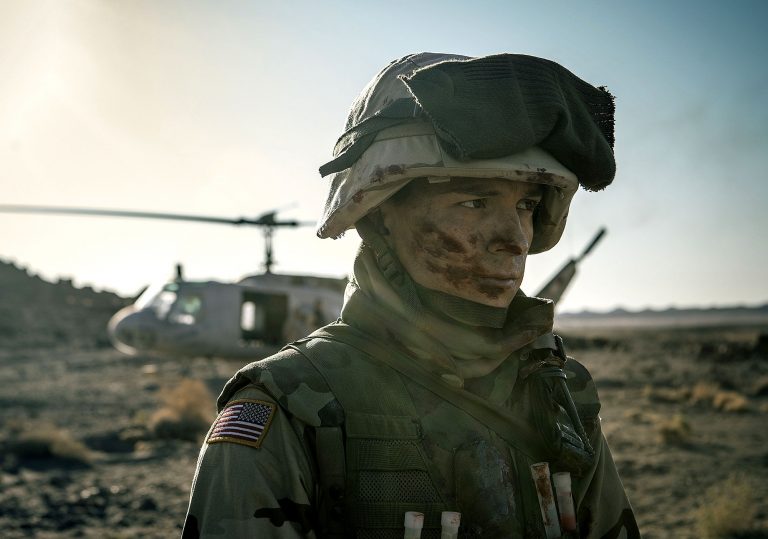 Remember when Iraq War movies were hot? Over the past few decades there have been numerous attempts to reconcile the myriad causes and effects of the so-called War on Terror, ranging from hard-hitting homeland dramas (American Sniper) to finger-pointing polemics (Redacted) to flag-porn fantasies (13 Hours: The Secret Soldiers of Benghazi) to boisterous bromedies (War Dogs). But there hasn’t been a notable addition to the genre for some time, which stands to reason, given Hollywood’s tendency to mine hot-button issues for all they’re worth. Besides, America has far more pressing matters on its mind now. Just don’t tell the Russo brothers.

If the directors’ previous film, Avengers: Endgame, was the apotheosis of American cinema’s 9/11 obsession, then their first post-Marvel outing may very well be its nadir. In Cherry, Tom Holland plays an army medic who returns to Ohio following a traumatic tour of the Middle East only to wind up even deeper in the shit. Haunted by the horrors he has witnessed, he turns to holding up banks in order to feed his growing drug habit, all the while struggling to maintain a healthy relationship with long-term girlfriend Emily (Ciara Bravo).

If this is all starting to sound familiar, that’s because Cherry covers extremely well-trodden ground: in its lurid depiction of frontline combat; in its perfunctory post-mortem of US foreign policy circa the mid-2000s; and especially in its facile observations about first love and what it means to come of age in the shadow of war. What we have here is essentially a two-and-a-half-hour redux of the music video for Green Day’s ‘Wake Me Up When September Ends’, minus the heavy guyliner and anthemic emo-pop. 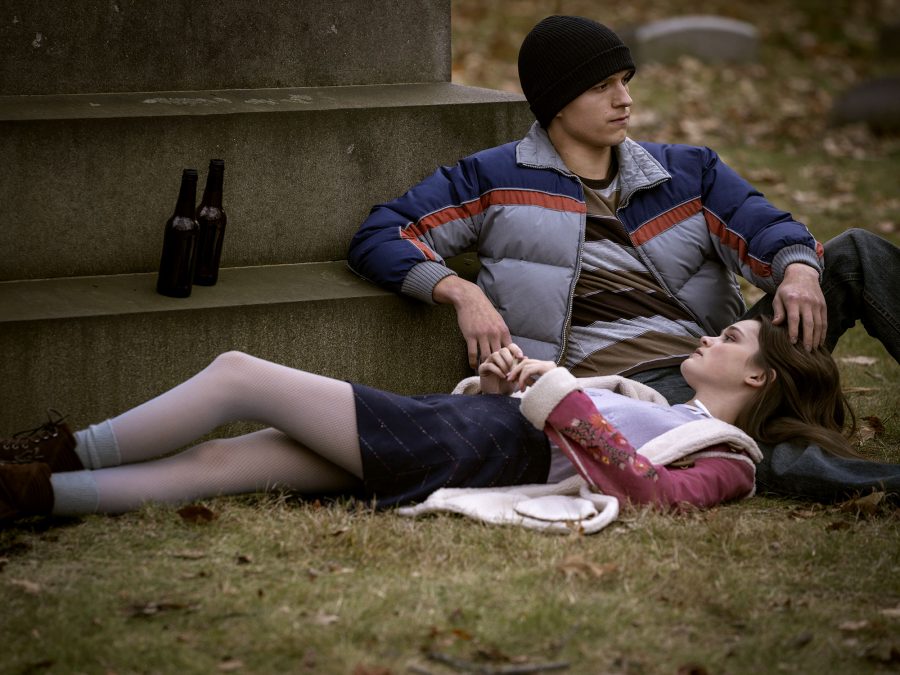 The first time we see Holland’s title character (per Nico Walker’s source novel, “cherry” is military slang for an inexperienced soldier; as in, what gets popped when you break-in a newbie) enter a bank, he does so innocently and uneventfully enough. Fatefully, however, the teller refuses to rescind a fine Cherry has incurred for exceeding his overdraft limit. This occurs in prologue, prior to his enlistment and subsequent disenfranchisement, and thus serves to establish a loose motive for the multiple armed robberies he will go on to commit. War may bring him to the brink, but it’s clear from the outset that Cherry is already a deeply confused and troubled young man.

But the most dubious aspect of the aforementioned scene is that the financial establishment in question is simply called ‘The Bank’. This may seem like a trivial detail to pick up on, but it’s telling when a film supposedly set in the real world – not to mention one afforded the kind of resources most quote-unquote indie movies could only dream of – contains such a glaring and unimaginative piece of artifice. Why go to the trouble of having someone design a fake company logo, and then prominently display that logo in your film, if you’re not prepared to get even a little bit creative with it?

Or perhaps there’s something else going on here. Could it be that the directors are, in fact, doing a funny? Ensuing stickups would appear to suggest so; Holland later makes unlawful withdrawals at ‘Shitty Bank’ and ‘Bank Fuck America’ (Anthony and Joe Russo are 51 and 49 years old respectively). This level of faux-ironic humour would not be out of place in a more low-brow or satirical film, but it stands out for all the wrong reasons in what is to all intents and purposes a gritty portrait of addiction and PTSD. 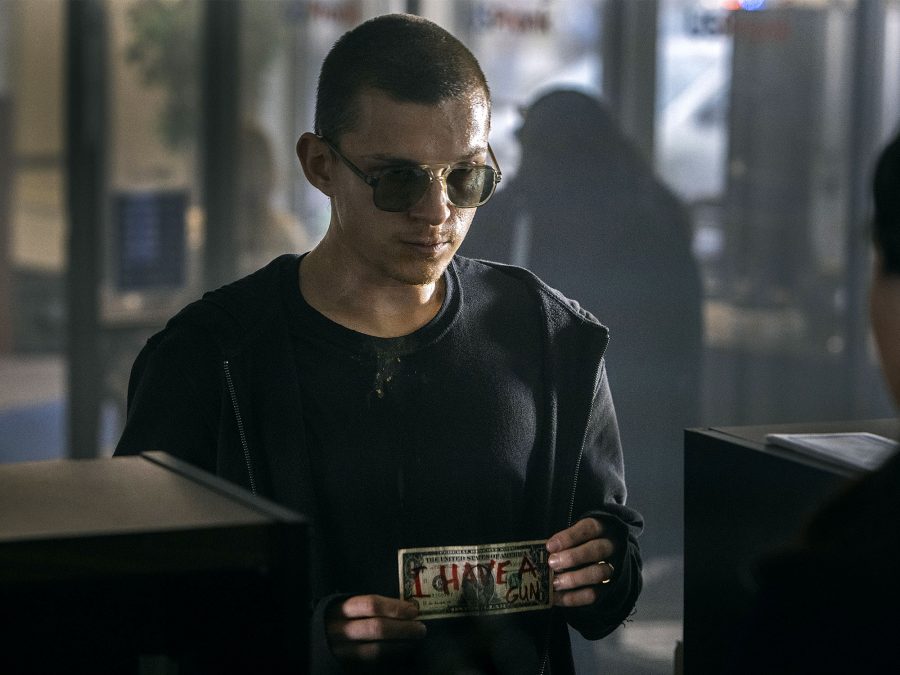 And yet cheap larks abound in Cherry: Jack Reynor pops up as a double polo shirt-wearing drug dealer who goes by the street name “Pills & Coke”, and whose biggest contribution to the film is the phrase “cunt nugget”; during Cherry’s army medical there is a disorienting reverse POV shot that can only be described as a sphincter’s-eye view; and Holland’s character repeatedly breaks the fourth wall, at one point unmasking himself mid-heist to explain *record scratch* *freeze frame* how he ended up here. Maybe the guys who brought us You, Me and Dupree aren’t best suited to making serious-minded art about the human cost of American imperialism.

On a more positive note, Holland doesn’t waste another opportunity to ditch the Spidey suit and showcase his range, skinhead and all. His committed, sweaty performance calls to mind onetime fellow web-slinger Tobey Maguire’s against-type turn in Jim Sheridan’s similarly-themed Brothers from 2009 – although Holland is hindered by a cliché-ridden script and violent lurches in tone. Still, as with Antonio Campos’ recent The Devil All the Time, he emerges from this dumpster fire of a film with his reputation unscorched.

In the end, the only thing that’s genuinely (albeit unintentionally) amusing about Cherry is the fact that our protagonist only joins the army to get back at Emily after she expresses a desire to further her education, which would mean her moving to Montreal. Being the petty and possessive type, Cherry would rather voluntarily put several thousand miles between himself and the woman he supposedly loves – thereby risking his life and setting them both on a path to near-total destruction – than try to make a much shorter long-distance relationship work. The joke, then, in the gravest possible sense, is on him. 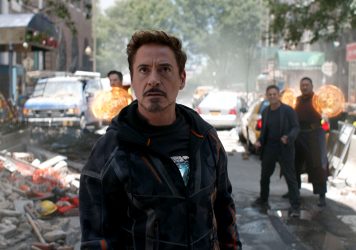