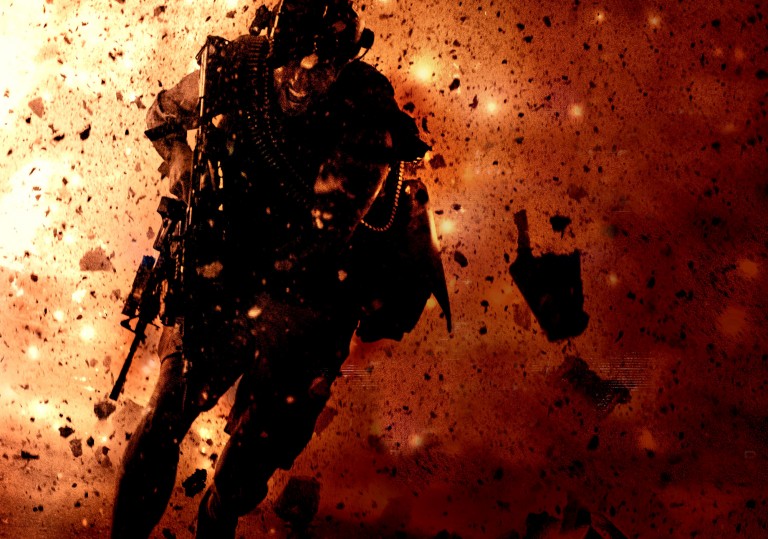 There’s a basic fluency to the filmmaking that’s superficially satisfying.

“America should not be meddling in the business of other countries,” says Michael Bay in his new film 13 Hours: The Secret Soldiers of Benghazi. He extrapolates on this point by asking his audience to glean pleasure from the sight of faceless, screaming, gun-toting Libyan militia men being sliced to pieces from bullets administered by American men who resemble glowing filet steaks on legs. War is bad, except when it’s awesome.

The film – like so many others these days – purports to be ‘a true story’. But if that is the case, then real life must have, in that specific place and at that specific moment in history, looked exactly like a Michael Bay movie. Facetiousness aside, this is in fact a one-sided true story, in thrall to the contracted American security personnel brought in by embedded CIA operatives running a secret base out of Libya’s second city, Benghazi.

Their awkward presence is felt by locals, now part of the “failed state” that rose from the embers of positive change heralded by the violent deposition of Colonel Gaddafi. Beyond a bumbling, bespectacled local translator who has decided to help the American cause, the “enemy” are given no dialogue or mouthpiece for grievance – they are simply shown to be devils, butchers and hatemongers who lurk in the shadows and will sacrifice all to witness star-spangled blood flow into the gutters.

John Krasinski – a man who has directed a film based on a David Foster Wallace short story – plays beefcake leading man Jack, back on his twelfth visit to the snake pit and once more charged with taking on security detail for the bumbling, blowhard desk jockeys. (I realise I’ve already used the term “bumbling” in this review, but any character who doesn’t have a beard and biceps the size of steel beams is depicted as bumbling – a nuisance obstacle propped in front of necessary gunishment.) The film’s most horrific moment is not when an enemy soldier gets turned into red slurry by machine gun fire, but when the film’s sole female character accidentally trips over and hits her head on the floor while bringing drinks to the men mid fire-fight. No-one comes to help her – they simply share a “huh, women!” glance and continue popping off rounds.

Maybe taking offence at a Michael Bay film is like complaining that a stand-up comedian swears too much, or that water is too wet. There’s little to suggest that he’s a director who’s troubled by the concept of nuance. But even as a visual spectacle, there’s little in 13 Hours that manages to make what is essentially a protracted gun fight over a big wall feel urgent or exciting. Computer game tropes such as targeting software and bullet cam serve to trivialise the fight, which the soldiers themselves are heard referring to as a second Alamo. The time spent fleshing out the freedom fighters’ lives back home feels perfunctory, and the idea that dangerous combat is a preferable position to be in than the grim desk job that awaits them back on home soil is an accepted fact rather than a quandary that’s considered from all angles.

Made to ride on the surprisingly populist tails of Clint Eastwood’s (great) American Sniper, Bay’s garish shoot-em-up lacks all the ambiguity and melancholy of that film, going all out to frame these troopers as unequivocal heroes who just love their country. We don’t find out how much money these men earned for their considerable toil, an information void that leaves you with the impression they were working for free. And where Libyan fighters are chopped and diced by neon-tipped bullets, the only American to suffer such ignominy has his forearm almost torn off – though a few elastic ligaments means that it remains attached, to eventually be fixed by multiple surgeries.

There’s a basic fluency to the filmmaking that’s superficially satisfying.