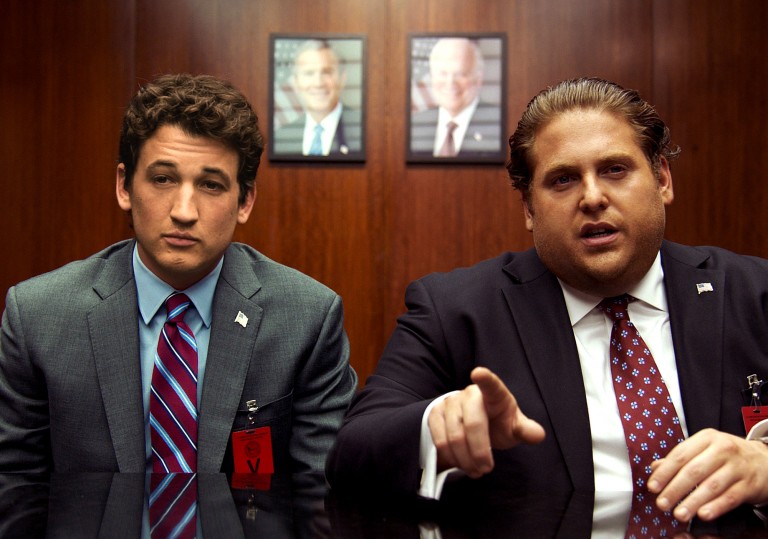 There’s some serious Hollywood heft involved here. And Jonah Hill is on a bit of a roll...

Hard to imagine a less imaginative rendering of this story.

There is something uniquely troubling about the film War Dogs, and it has nothing to do with its wannabe explosive, ripped-from-the-headlines subject matter. It casually reels off the true tale of two twentysomething ice-white dudebros who parlay their mild business acumen and an awesome dexterity for bullshit into a global arms logistics agency. The discovery of a government loophole which allows them to bid on gigantic (and increasingly volatile) trade opportunities eventually leads these wily chancers into very choppy waters.

The conflict that comes of mouthy, aggressive and woefully under qualified wideboys entering into a world which is clearly more complex than they can instantly comprehend has become a modern dramatic boilerplate – the American dreamers hammering bureaucratic weak spots for tidy personal gain. Yet where War Dogs offers a cautious celebration of reckless, industrious youth, the film itself is the product of a filmmaker who is utterly unwilling to scavenge for advantageous points of entry.

It is sometimes so tired and lacking in basic inspiration, that the biggest laughs are often unintentional. Example: its comically inept use of musical cues. A sequence in which the chest-bumping duo, played by Miles Teller and Jonah Hill, ingest some coke together in an office, and House of Pain’s ‘Jump Around’ drops on to the soundtrack like a 10-tonne dumbbell. It feels like a comedy holding track that was accidentally left in the final cut. Later, when the pair are forced to travel to Jordan to secure a shipment of guns destined for US forces in Baghdad, Iggy Pop’s ‘The Passenger’ plays over a montage of stock skyline vistas. Make your sappy true-life tabloid story, but at the very least take a small amount of time flipping back over the entire history of music in search of a cut that’s more interesting, more vital than the god-damn Passenger – something which doesn’t instantly remind you of many other, better movies.

In fact, the whole enterprise feels like it made up of holding material, awaiting the real take, the real edit, the real song, the real voice over, the real line reading, the real inter-title. Director Todd Phillips is not someone known for his filmmaking finesse, having found understandable success with rowdy, rough-edged comedies such as Road Trip and The Hangover trilogy. Yet, he comes a-cropper in his attempt to follow his old pal Adam McKay on to the battlefield of Serious Film Art, and try as he might to emulate its beats and its tone, this is no The Big Short (faint praise, we realise).

As in so many films of its ilk, we observe as the improbable wads of cash are amassed and then, at the point where things just get a little too loco, everything goes to shit. That our heroes are two men who we would happily see ground down into burger patties and served to the inmates of a northern reform school is moot. Their essential scumbaggery is duly punished with symbolic prison sentences which help to perpetuate the myth that white collar crime is victimless, even when the film shows that it clearly isn’t.

Aside from its more obvious predecessors, War Dogs also takes a superficial, but interesting look at the cultural legacy of Brian De Palma’s Scarface. Hill’s Efraim Diveroli mounts a giant screen-cap canvas of Al Pacino wielding his “little friend” on the wall of his office like a moral totem. He references the film, claiming that the pair are akin to high-rolling gangsters, getting shit done like money-making machines, leaving the ethics of their endeavour for someone else to deal with. Phillips constantly finds ways to let his heroes of the hook, always taking their semantic swerving at face value. He is loath to just let their criminal conniving be judged as such. There’s always the sense that this film will only work if an audience believes that the scampish wars dogs themselves are full-bore badasses, and not pathetic bottom-feeders in hand-me-down cabana wear.

But perhaps the film’s biggest crime is its awful and manipulative depiction of any country outside of the US. Phillips offers a broad-brush, dangerously impressionistic take on far-flung locales which hinges on limp ethnic stereotypes and places hard emphasis on the fact that anywhere that isn’t Miami is likely to be a dilapidated, backward shitbox populated by trigger-happy goons or easily exploited help-meets. Whether it’s intentional or not is uncertain, but the film’s hatefully bleak depiction of Albania (purely to ramp up the drama of their final big score) is maybe the final insult in a movie doesn’t even have the wherewithal to realise when its shirking political correctness.

There’s some serious Hollywood heft involved here. And Jonah Hill is on a bit of a roll...

Hard to imagine a less imaginative rendering of this story.