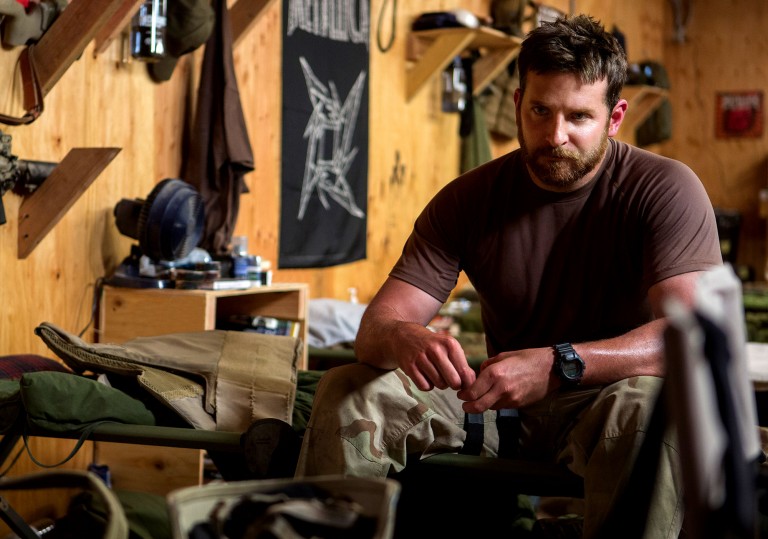 Impressive in the particulars, weaker on the whole.

Not the cleanest of kills.

To shoot or not to shoot? When we first see Navy SEAL sniper Chris Kyle (Bradley Cooper) in Clint Eastwood’s grippingly made yet ideologically muddled war film, he’s faced with just such a conundrum. This is his first of four tours of duty in Iraq, and he has to quickly determine whether to put a bullet in a child who may or may not be carrying a bomb toward a Marine foot patrol. It’s one of those horrible choices unique to combat, and by putting it upfront, Eastwood and screenwriter Jason Hall (adapting the real-life Kyle’s book) imply that the film to follow will delve deeply in some tough moral questions.

That’s true to a point: Kyle’s ultimate decision in this terrible matter is deferred for half-an-hour or so while the movie flashes back to his Texas adolescence. It’s an upbringing painted in broad brushstrokes and absents the oversaturated visual adornments with which Eastwood’s frequent cinematographer, Tom Stern, typically composes. Simple or simplistic?: There’s the macho father who instills a love of guns and America in Kyle. There are drunken nights out after the rodeo and a cheating girlfriend to kick to the curb. There’s Kyle’s chance encounter with Taya (Sienna Miller), the woman who will become his wife and mother his two children. And there’s the 9/11 attacks (viewed in a quick cutaway to a news broadcast), which act as the impetus for Kyle’s military career — during which time he will rack up the most confirmed kills of any United States serviceman in history.

It’s difficult to say if Eastwood is being subtle or lazy with this straightforward parade of good-ol’-American-boy tropes, but the director’s sober approach is intriguing. Kyle was a controversial figure, vocal about his commitment to Christ and country while reportedly augmenting his biography with tales of shooting a pair of Mexican carjackers and punching out former Minnesota governor/ pro wrestler Jesse Ventura. The way the bulked-up Cooper plays him is much more minimalist. Kyle is a seething hulk with a thousand-yard stare who is clearly keeping his wartime agonies to himself. To do anything less would be a betrayal. This is a powerful one-note performance, so committedly opaque that you keep leaning forward, waiting for the steroidal armour to crack.

Eastwood doesn’t shy away from showing the bloody horrors of war, especially when a spectral Taliban antagonist known as The Butcher (Mido Hamada) appears to punish the panicked Iraqi populace for consorting with the American invaders. Clint’s a genre guy at heart, and he’s at his best dutifully detailing the many skirmishes in which Kyle finds himself. On the homefront, the film is on less sure footing, especially in the way it treats Miller’s character — a mere cipher who gets to be pregnant and worried and little else.

There’s also the matter of the abrupt finale, which plays with a rah-rah repulsiveness (in the blinkered vein of Peter Berg’s atrocious Lone Survivor) that seems antithetical to the rest of the film. From studious nuance to distorted nationalism — it leaves a very bad taste.

Impressive in the particulars, weaker on the whole.

Not the cleanest of kills.