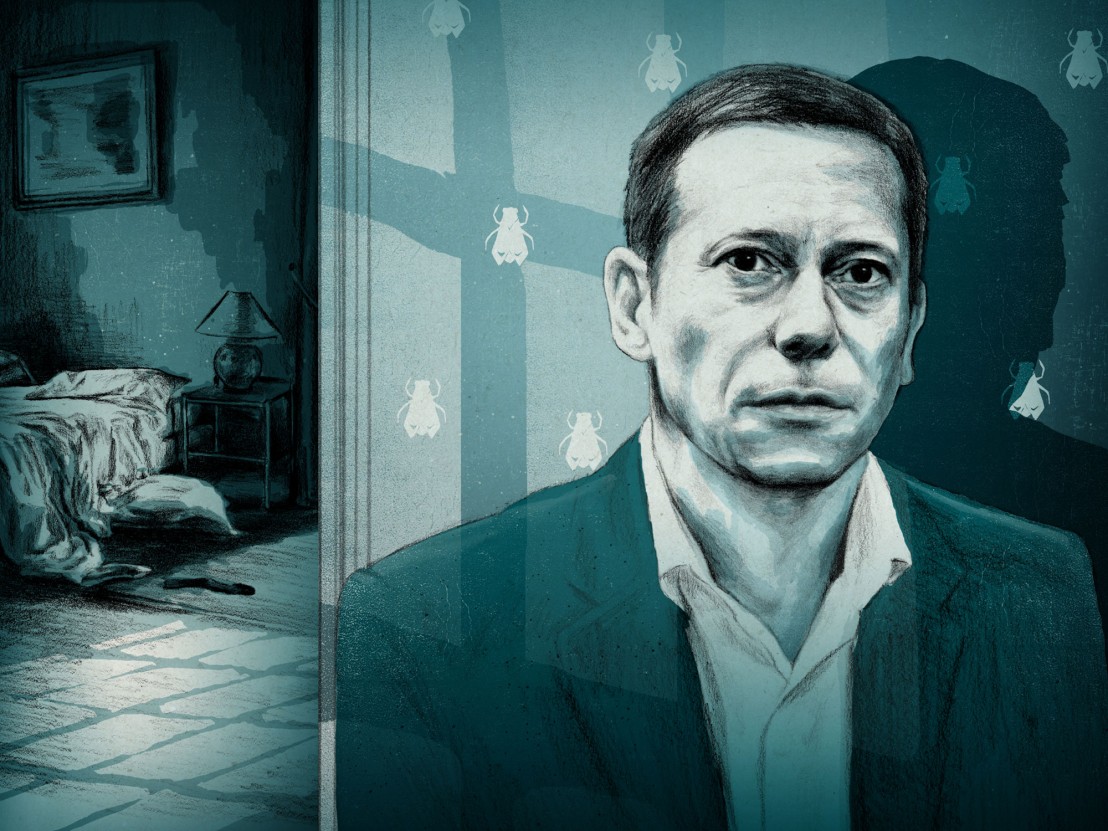 If you don’t know the name, then you’ll certainly know the face. For more than a quarter of a century, Mathieu Amalric has been plugging away as a character actor of high repute and rare skill. He rose up through the ranks in the technical department, working as assistant director on Louis Malle’s classic Au Revoir Les Enfants in 1987 before moving over to acting in the early ’90s and then directing his own features, starting with 1997’s Eat Your Soup.

Some of his strongest performances have come from his collaborations with the director Arnaud Despleshin, including epic, verbose comedy dramas such as My Sex Life… and Kings and Queens. His most recent directorial effort, The Blue Room, is also his finest, an unapologetically curt adaptation of the Georges Simenon novel of the same name in which the details of a murder and a torrid extra-marital affair are intertwined and revealed in reverse.

LWLies: Do you recall your first ever encounter with the work of Georges Simenon?

Amalric: You know… when you’re in adolescence, or even as a kid, and there are those old books in your grandmother’s toilet? Or you are bored during a holiday and you find those tatty books up in the attic? They’re always there, in every house. This is Simenon. But each person falls upon a different Simenon first, and often completely by chance. And I think this idea has commanded my whole life, in fact. If you fall on Inspector Maigret, it’s not the same thing than if you discover one of his roman durs, like La Chambre Bleue.

Do you still have your original copy of ‘La Chambre Bleue’?

I do. I have have had it for many years, and when I read it now, I realise it was maybe a bit too much for a young boy. It relates to some compulsions – I could recognise them in my body. But that’s what’s amazing with Simenon: it’s like if a guy plans to live his life searching for what was common to human beings and not what was so special or particular to every person. There is something where we all recognise our own way of hiding. We have to hide those compulsions so the day can go normally. He asks if we can get through a day without being animals.

It’s quite a cruel story.

We are very, very cruel, in fact – no? Don’t you think? I did a film called Tournée and I remembered that for the last scene we had called it ‘The Blue Room’. It was a moment out of time, out of real life, where maybe life is worth living only when two bodies are attracted one to another. We all know that sometimes you just forget everything. You even forget to go and collect your child from school. And, that’s what Simenon was talking about.

How did you get the great Portuguese producer, Paulo Branco, involved?

He is a man who has the genius to be crazy. He only really films the films that nobody wants to do. I’ve known him since I was 17 because I was a very an his assistant on films. He was like a father to me. He knew I was writing, writing, writing. I was doing an adaptation of Stendhal’s ‘The Red and the Black’ to tell you the truth, 600 pages and lost in that incredible world. He saw my script and said, ‘No, you have to shoot a film right now. Stop what you are doing and just shoot.’

I went back home and he said, ‘shoot the film in three weeks, a little film…’. I went to my bookshelf and picked out all the smallest books, because three weeks is not a long time to shoot a film. And there was this blue book, and I started to read it again and I loved it. It was just so incredible. In the beginning there is this moment with a French woman who has her legs open, and it is the first time he even uses the word ‘sperm’ in the book. I mean, it’s from ’52, it’s incredible. It’s the story of a man who experiences that, and doesn’t come back from it… We had a lot of fun, because we shot a film like Simenon, who would write books in 11 days, you know.

How did Stephanie Cleau, who plays a kind of femme fatale in the film, become involved?

If I had thought about it too hard, we never would have done this film, especially if it wasn’t for Stephanie who was my wife at the time. And we did this thing where we said to each other, ‘let’s be lovers’. And because in the novel the physical description of Esther Despierre was so close to Stephanie, it was very strange: a tall, dark-headed woman, who looks like a statue who is unreadable because of her coldness. A coldness that can drive a man crazy.

Was it easy to convince her to be a part of the film?

Oh no, no, no. It was not a case of convincing, it was a game pretty much. Like a mutual joke, or an old couple being perverse.

Would you say it’s quite a conservative story, due the fact that it’s very against the idea of infidelity.

No, it comes not from a conservative point of view, but the fact that when Simenon wrote it, he was 62. He is not that young and, as you know, he has a real appetite for sexuality. Some people need chocolate, some people need to have sex every day. We are not all the same.

Is it important that this story takes place in a small town rather than a city?

A lot of novels by Simenon take place outside of the cities. You have everybody knowing everything about everybody. If you cheated on your wife, somebody saw you in your car, so then they will tell the neighbour who will tell the neighbour. And it is an unconscious thing. He is a self-made man, he puts all this effort in to have this beautiful house with the perfect wife, the perfect daughter, everything seems perfect. That’s why I wanted this house to be transparent on top of a hill. Like a lot of successful people, the urges of body haunt you. And bam! it’s all over.

The film feels inspired by classic film noirs of the ’30s and ’40s.

Yes, it’s true. It’s true that we thought about it a lot. There is one film when we were writing it that helped a lot Truffaut’s The Woman Next Door. I didn’t know Truffaut loved Simenon so much. Fanny Ardant who told me that. And the last book he was reading, before his death, was a biography of Simenon. There is a scene where they go to the cinema and the character doesn’t remember what he saw and that is in the novel. And that helped us a lot also for what music we would have. I also thought a lot also about Angel Face with Robert Mitchum.

Do you have any plans to do another quick turnaround movie like this, or would you like to do something a bit bigger, grander?

I love to react to commission. But now I’m working on a film about Barbara. I don’t think she’s famous in England. She was a French singer, so I am doing a twisted biopic her. She was a singer from the ’50s to the ’70s who is just amazing. So I’m working on a bigger film right now.

Who will play her?

Jeanne Balibar. Jeanne and I spent 10 years together, we have two kids. Well, they’re not kids. They’re nineteen. We’re very close. We’ve been in a lot of films together, yes. We’re shooting November to December.

Are you currently shooting a new Arnaud Desplechin film?

Yes and I’m very excited about it. It’s going to be amazing.

Is this one in the English language like Jimmy P?

Is there an Esther?

There is no Esther. There is three women but not the same. There are other women. You will see. Wow, it’s going to be something!

The Blue Room opens in UK cinemas on 9 September, and is released on MUBI 25 September.