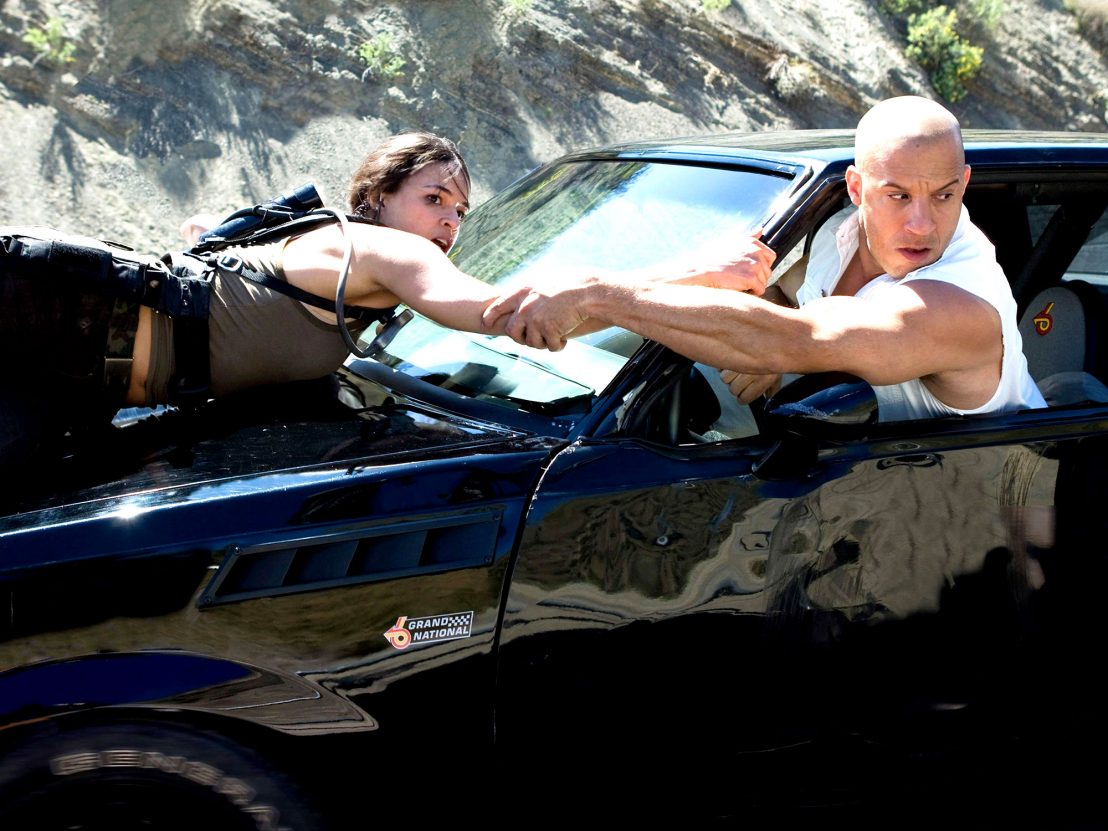 It’s easy to mock The Fast and the Furious franchise. On the surface it looks to be no more than a collection of films about large men in small tank tops using fast cars to commit ridiculous crimes. The girls are hot, the cars are hotter and the cheesy lines melt on both to create a fondue of B-movie badness.

Yet there’s method in the badness. Not only is the franchise incredibly ambitious, it is also a wonderfully human. For 16 years and counting the series has experimented with form and content, shifting the focus away from fast cars to the people inside them, and exhibiting an uncanny ability to turn seemingly irredeemable flaws into core strengths.

This is no more evident than in the franchise’s approach to diversity. While the first three films follow the traditional white male hero narrative, the next four set about completely dismantling it. Brian (Paul Walker) is still the all-American white male hero throughout, but from 2009’s Fast & Furious to 2015’s Fast & Furious 7 he’s the only white male hero in a large, increasingly diverse crew comprising Korean, African-American, Israeli and Brazilian actors.

The minorities that were playing second fiddle in the earlier films get come to the fore in Fast Five, and receive even more prominent roles in the subsequent sequels. In these later films, Tyrese Gibson’s Roman and Ludacris’ Tej are no longer the African-American sidekicks they were in 2 Fast 2 Furious; Sung Kang’s Han is no longer the wise Asian teacher he was in Tokyo Drift. They are now Brian’s equals, both hierarchically and, more importantly, narratively.

This diversity is not limited to the cast. Fast and Furious 8 is directed by Straight Outta Compton’s F Gary Gray; Boyz n the Hood’s John Singleton directed 2 Fast 2 Furious; Furious 7 was helmed by James Wan, a Malaysian-born Australian director; while franchise instalments three to six were directed by Taiwanese American Justin Lin, who gave John Cho and Sung Kang their first major roles.

In recent years Star Wars: The Force Awakens and Rogue One have been praised for featuring women, people of colour and minorities in lead roles, thereby shattering the notion that only white men can carry blockbusters. However, 2011’s Fast Five went one step further by proving that it’s possible to create a huge blockbuster franchise while actively promoting diversity among the cast and crew.

It also showed that you can make multi-billion dollar franchises while taking creative risks – something that cannot be said for the Marvel Cinematic Universe, which is safely the biggest franchise around today. The Fast and the Furious films started out by telling stories about street racing in Los Angeles before transforming into a globetrotting heist movie franchise starring The Rock. Who’d have thought 16 years ago that Vin Diesel, an actor with the emotional depth of drying cement, would one day be lining up alongside Charlize Theron and Helen Mirren in a film whose predecessor earned $1.5 billion at the global box office?

How many franchises can claim to be so ambitious, so eager to evolve? How many franchises would be willing to experiment with time and bend their whole chronology to allow a secondary character, Han, who dies in the third film, to appear in the subsequent three as a core member? It is testament to the ingenuity of the Fast and the Furious that his unexpected return in the fourth film forces us to reappraise, even redeem, Tokyo Drift – a film whose obvious flaws are obscured behind the now much bigger picture.

But just what is the bigger picture? The ridiculous action sequences and narrative switch ups are core components of the Fast and the Furious franchise, but they are not the foundation of its success. A singular idea courses through the entire series, informing every decision the films and characters make. As Diesel’s Dominic Toretto frequently grunts, it’s family. Yes, the franchise in which cars fall out of planes and smash through buildings, in which Jason Statham and Vin Diesel club each other with metre-long wrenches, and a constantly perspiring Dwayne Johnson breaks open his arm cast just by flexing his muscles, is really about family.

Just as the action is amped up in each new sequel, so too is the importance of family stressed again and again. In the later films, Brian’s bro-cop becomes a man struggling to reconcile his need for speed with his obligations as a young father. Since Tokyo Drift, every film in the franchise has been precipitated by someone hurting someone else’s loved one. Before and after every punch or crash, a character will talk about the importance of family. Diesel usually talks about it during both activities.

Over the course of eight films’ worth of big men throwing big punches and talking about familial bonds, something miraculous has happened. The dialogue has stopped seeming corny, the love now feels genuine. So much so, in fact, that even though no one has ever gone to see a Fast and Furious film in search of cathartic release, at the end of Furious 7 that is precisely what we experience.

Despite its aggressive title and promise of high-octane pyrotechnics, the film is ultimately a beautiful, sincere eulogy for Paul Walker. It says a lot about how far the franchise has come when Vin Diesel can deliver a speech about family and make eyes well with tears instead of roll.