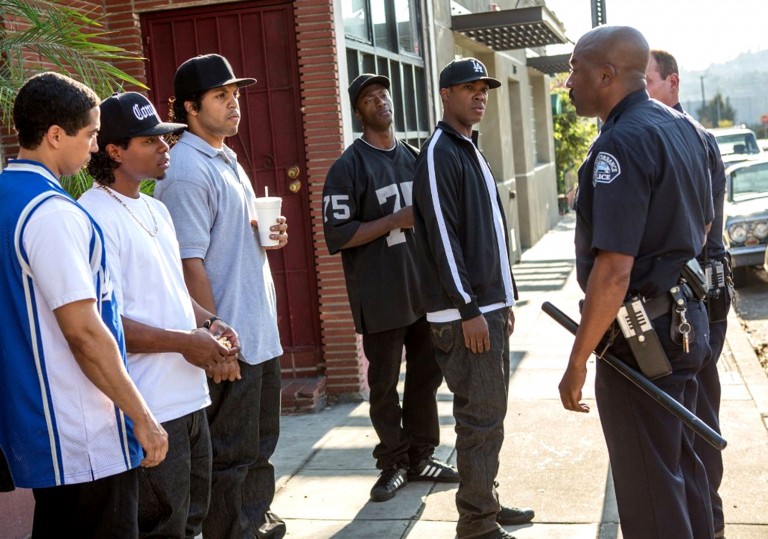 “You are now about to witness the strength of street knowledge…”

A worthy monument to a key moment in rap history.

Music critic Sasha Frere-Jones called it “The Compton Moment”. The movie, the record, the headphones, the ads, the memes – a commemoration of a musical revolution, unified and commodified. In this moment, Compton has ceased to be a place; it is to West Coast hip hop what Hollywood is to the American cinema – an idea and a promise.

The cover of Dr Dre’s accompanying album even replaces the Hollywoodland sign with one saying “Compton”. While the men canonised in Straight Outta Compton left the area decades ago – “I moved out of the hood for good, d’ya blame me?” Dre rapped on ‘The Watcher’ in 1999 – it is a notion that has come to define not only their identities, but the movement they helped create. It is the story of ’80s rap collective NWA, the influential progenitors of gangster rap, whose debut record, ‘Straight Outta Compton’, was a defining part of the hip hop aesthetic of the late 20th century. The picture is an imposing, self-conscious epic, blinkered and celebratory, constructed with an Old Hollywood zeal for legacy preservation. It feels like a cultural milestone – a rags-to-riches story told with enough classical sensibility to lionise a movement that has long been vilified and marginalised by the mainstream cultural narrative.

Indeed, the whole release feels like an old-fashioned studio package, carefully calibrated for maximum impact. Now that these men are part of the establishment – Dre is the billionaire founder of Beats Electronics – it follows that they should set out to make the first grand, sweeping Hollywood rap movie. The prevailing notion is that of legacy, and thus the question of authorship becomes key. Director F Gary Gray is a longtime collaborator of Dre and Ice Cube and it is very much their vision that appears onscreen. Much has already been made of key events omitted from the film – Dre’s abusive past with women being the most heinous example.

But intelligent audiences will recognise that the film represents a sanctioned truth, and it should be judged on those terms. It is the Sergeant York of rap movies – a hugely accomplished entertainment propagating a useful myth. Of course, mythmaking is an integral part of hip hop’s modus operandi (as has been lampooned in brilliant rap mockumentaries Fear of a Black Hat and CB4), and Straight Outta Compton is simply another part of this established narrative.

It is a picture of unadulterated exuberance and surprisingly expansive reach. The three leads who play the key members of the group – Ice Cube (O’Shea Jackson, Jr – his real life son), Dre (Curtis Hawkins) and Eazy-E (Jason Mitchell) – are each extraordinarily assured. While structurally episodic, the film rarely loses sight of its main thematic thrust – the infallible artistic drive of its central trio. Though Eazy-E did not live to see his legacy come to fruition, Dre and Ice Cube find themselves in the curious position of being elder statesmen in a young man’s game and, while both have been uneasy to the point of cantankerousness about this role in the past (“We started this gangsta shit / And this the motherfucking thanks I get?”), the immense joy of creativity evident in Straight Outta Compton suggests a belated reconciliation with their lot.

With the film arriving in the summer of 2015, Straight Outta Compton inevitably finds itself a part of the post-Ferguson narrative. Throughout the picture, we are confronted with that horribly familiar image of young black bodies being slammed against the pavement by the police. From the group itself to Rodney King, it’s an image that’s ingrained in the celluloid. As Dre says on ‘It’s All on Me’, “Took that feeling to the studio and cued it up.” The result, of course, was ‘Fuck Tha Police’. The hysterical aftermath of the song is shown in all its ugly infamy, with the group finding themselves increasingly targeted by law enforcement. The moment in which the song is played against police orders in Detroit is electrifying – that beautiful alchemy of youthful energy and righteous anger. It’s skin tingling.

The film is bookended by two transactions – the first is a drug deal gone wrong and the second is the Beats buyout by Apple in 2014 (which is noted in the credits), making Dr Dre the richest man in rap. Gray proves himself to be surprisingly adroit at tallying these two seemingly disparate states. Though the rap fixation on money is a frequent subject of mockery, Straight Outta Compton shows fiscal security as the only antidote to the uncertainty of the deadly streets. In this sense, the picture recalls the trajectory of the boxing movie – marginalised young men pursuing their vocation to escape their beginnings, and suffering exploitation at the hands of more powerful authority figures. When money is precarious, self-preservation becomes an all-consuming state; hence the mantra-like affirmations of wealth permeating rap culture. In the case of NWA, it also happened to turn rebels into the establishment. Straight Outta Compton represents a reconciliation of sorts.

“You are now about to witness the strength of street knowledge…”

A worthy monument to a key moment in rap history.