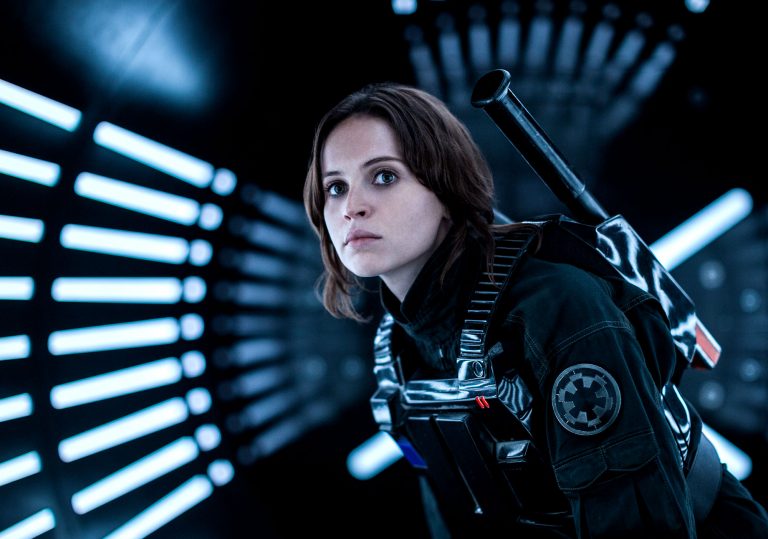 The Force Awakens blew us away. Can Gareth Edwards repeat the trick?

A Star Wars story for the ages.

Whether manifested in the blinding glare of a nuclear blast or the last glimmer of life in a dying father’s eyes, light can be found even in the darkest moments. This sense of hope powers director Gareth Edwards’ dazzling new film, Rogue One – it is the foundation upon which Jyn Erso (Felicity Jones) and her ragtag rebellion is built, the unyielding force that gives her belief and strength in the face of extreme adversity.

Yet where Star Wars traditionally presents binary oppositions in stark terms, Edwards is more interested in exploring the grey areas in between. The Rebel Alliance, for example, appears not as a united front but a fractured, greatly diminished last line of defence; its leaders conflicted, desperate and fallible. The Galactic Empire, for its part, is depicted not as a single malevolent organism but as a massive corporation bent to the will of a handful of morally corrupt, power-mad men.

If The Force Awakens was a glorious exercise in autohomage, Rogue One instantly feels less beholden to George Lucas’ original trilogy. Where JJ Abrams delivered a crowd-pleasing spectacle packed with cluster bombs of unadulterated nostalgia, Edwards does something quietly radical with the time-honoured formula, not exactly tearing up the Rebel rulebook but using fine brushstrokes to incorporate various classic Star Wars motifs in subtle and interesting ways. He uses shadow and light in lieu of the franchise’s trademark screen wipes to move gracefully, sometimes ominously between scenes. An iconic character is (re)introduced in unmistakable silhouette in one of several clear nods to Steven Spielberg. Familiar musical refrains gently swell to awe-inspiring celestial imagery that would make Stanley Kubrick weep.

It’s not all plain sailing: the first hour is heavy on exposition; a rewired droid with no social filter (voiced by Alan Tudyck) initially threatens to usurp Jar Jar Binks, and then there’s the ethically dubious decision to digitally exhume a long since departed actor in order to reprise a role that could just as easily, though perhaps no less controversially, have been recast. 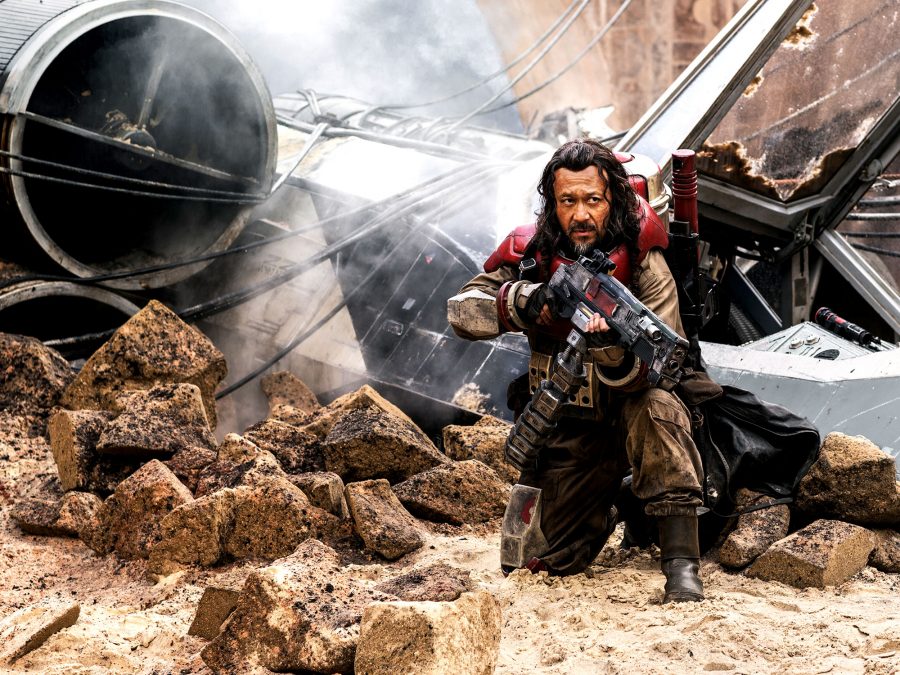 When Edwards gets it right, however, the results are spectacular. He may not have the same knack for Spielbergian humour that Abrams employed to winning effect in Episode VII, but Edwards is a supreme visual storyteller who makes genuinely bold, risky artistic choices (as anyone who’s seen 2014’s Godzilla will be able to attest). We already know the fates of Jyn, Diego Luna’s Cassian Andor, Donnie Yen’s Chirrut Îmwe, Wen Jiang’s Baze Malbus and Riz Ahmed’s Bodhi Rook – their shared legacy is written in the stars – but Edwards doesn’t treat these characters as mere footnotes to another, even grander saga.

Instead he shows how even the smallest action or gesture can have a profound impact on the bigger picture. It’s often said that history is written by the victors, but in Rogue One, triumph and tragedy are separated by the slimmest margins. As we scramble our way across multiple star systems, navigating a scrappy, slow-burn plot that builds towards a truly awesome third act showdown, even the most mundane details, such as a glitching hologram or a jammed spaceship door, are imbued with armrest-gripping gravity.

This is a film about taking charge of your own destiny, even if that means making the ultimate sacrifice. In the moment, acts of immeasurable bravery are carried out to little fanfare, characters unceremoniously dispatched with an even-handed matter-of-factness that has become an essential hallmark of the director’s work. Only Forest Whitaker’s battle-weary resistance fighter Saw Gerrera (who looks like he lost a fight with a Dyson vacuum cleaner) is given short shrift here, making his exit almost as abruptly as he enters the fray. That said, he – along with each and every member of this mightily impressive ensemble – plays a vital part in Jyn’s redemptive journey.

The comparisons between the young heroine of this film and Daisy Ridley’s Rey are unavoidable, but while both have serious abandonment issues and are compelled by the burning desire to get back home, the former has all but abandoned hope because doing so would require her to return not to a destination but a point in time. Jyn carries around with her a troubling family secret, one she is unable to reconcile with until a message from an unlikely source sheds new light on her past and that feeling of hope comes flooding back. The scene in question is the film’s emotional anchor, and Edwards lingers on Felicity Jones’ face so that we witness the full weight of this shock revelation sink in. It is a crushing moment. 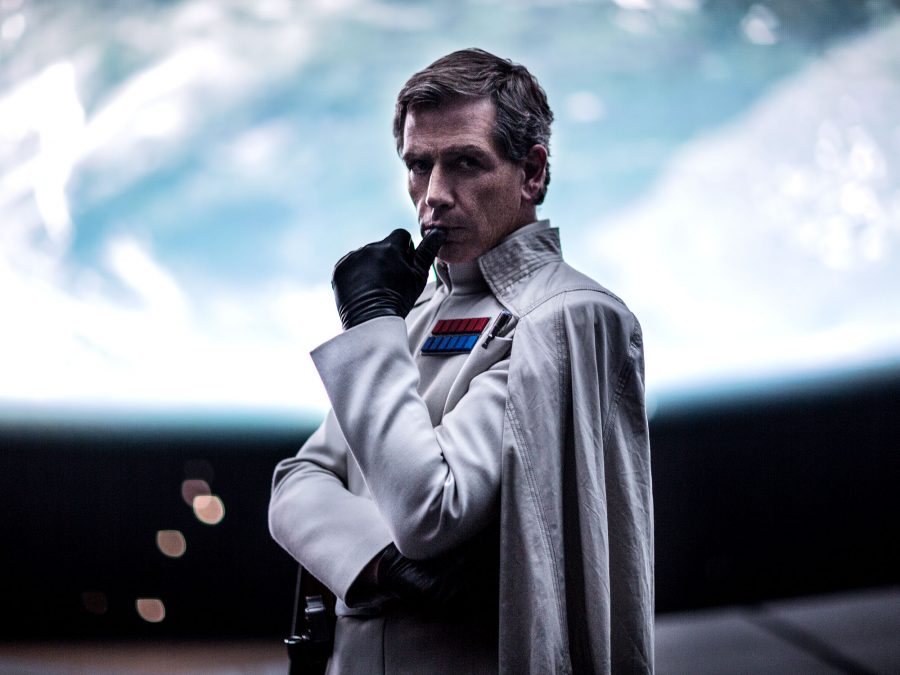 Unrelenting in its austere counting of the physical (and spiritual) cost of war, Rogue One is the darkest Star Wars movie ever made. Not a swashbuckling hi-gloss space epic but a dirt-smudged human drama in which the eternal struggle between good and evil – the light side and the dark – plays out almost exclusively at ground level, in dense jungles, dystopian neo-cities and on pristine beaches.

The set pieces in this film are no less exhilarating than anything the official Saga has to offer, its scope just as sweeping and majestic, but Edwards resists the temptation to shoehorn in extravagant digressions which serve no function to the actual story, like, say, the podracing sequence from The Phantom Menace. It is also entirely devoid of empty romanticism and the kind of disorientating, protracted FX-driven destruction that has become the scourge of modern blockbusters. Even more crucially, Edwards has his actors to do most of the heavy lifting, meaning that even at 133 minutes Rogue One feels relatively restrained, stripped down to its purest thematic essence.

When screenwriter Chris Weitz apologised recently for “politicising” the film by tweeting a series of since deleted responses to #DumpStarWars, he should have saved his breath. Like every Star Wars story before it, Rogue One is inherently, inescapably political, but that doesn’t mean there is some insidious hidden agenda contained within its surface-level allegory (if the fact that the Galactic Empire is a thinly-veiled satire of the Third Reich is brand new information to you, then literal symbolism in Hollywood cinema really is the last of your worries). Its message is simply and reassuringly one of hope, and it never once labours this point or rams it down the viewer’s throat.

Then again, maybe there is something in the whole anti-Trump propaganda conspiracy theory, although in truth it’s doubtful that Weitz or Edwards explicitly intended to evoke President Obama or America’s current sociopolitical climate in the film’s last lines. After all, hope is a universal virtue more powerful than even the most sinister forces in this or any other galaxy.

The Force Awakens blew us away. Can Gareth Edwards repeat the trick?

A Star Wars story for the ages.