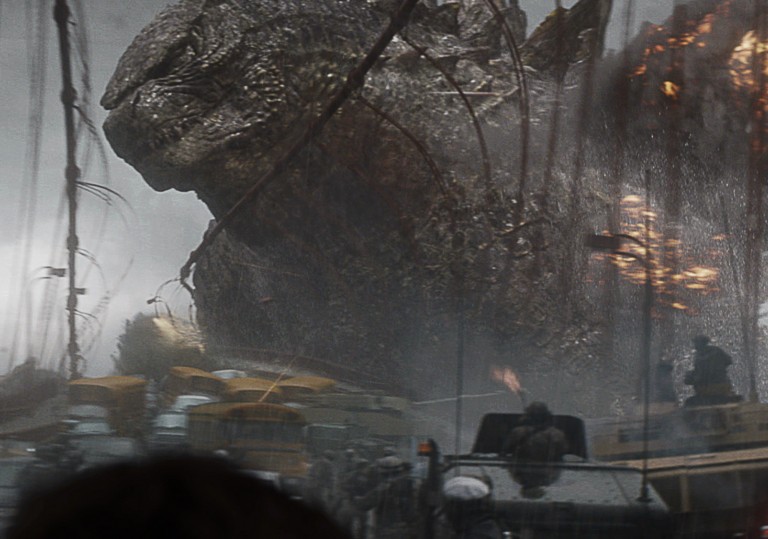 Everything’s in place, we just need the fury.

Considering he currently stands at over 100 metres tall in his stockinged feet, there has been very little trace of Godzilla in the weeks and months leading up to Gareth Edwards’ loadsamoney rejig of the legendary Japanese monster movie franchise. While the big lizard himself has – quite correctly and understandably – been kept under wraps, it might seem worrying to some that the film has also remained lurking in the shadows. The new X-Men movie is basking in some effusive advance-word, an all-pervasive Pringles tie-in and – for some reason – its own Virgin train. The similarly-scaled Godzilla movie has, however, restricted itself to a few pretty posters and a couple of natty trailers.

Though all very old-school and admirable in theory, such behaviour more often points to the fact that the studio nabobs have seen the finished article and realised that they’ve dropped a big-money clanger – one that they hope to smuggle into the cinemas for an opening weekend smash and grab before the everyday punters get wise to the fact that they’ve been sold a radioactive lemon.

Who gives? Let’s leave all that grubby dime-store shizzle to the beancounters and let the devil take the hindmost, yeah? Quite right. Yet, in this case, all wrong. For if any film deserves a front-end push to grab people by the lapels and piss pure liquid fire into their stupid, flabby faces, this is it. Because Godzilla, quite simply, is an atomic fucking bomb of a movie.

Get yourself ready for a top-down cavalcade of sublime post-historic fury that melds the Darwinian majesty of Jaws to the feral, DNAtheistic chaos of Jurassic Park amid the painterly, mystic awe of Close Encounters. Your jaw will never leave the floor, and if it does, it will only be so’s you can silently mouth some rhetorical, someway-coherent plea to the similarly slack-jawed meatsack weeping along to the cinematic perfection in the seat beside you. ‘Why can’t all films be as good as this?’ you’ll ask. ‘I don’t know,’ they will reply, ‘but, I would give my left nut and/or ovary for one of these a year.’

Fulminating over the plot of Godzilla is not only unnecessary, it is unfair. There’s one big huge bastard monster out there – we all know that ahead of time – but he’s literally all over the place. This Godzilla is not simply one of those gargantuan ABC-ers where one can predict their every lumpen, pre-ordained pawprint, but an eccentric galumph of giant narrative feints that rubbishes our every popcorn expectation. Does the big guy tear down the Eiffel Tower? Yes, but is it the outsized Parisian landmark or the Las Vegas pastiche of same? You see? No? Fuck you!

For form’s sake, then: there’s some big earthquake-ian to-do in Tokyo, circa 1999. Hard-hatted scientists Juliette Binoche and Bryan Cranston (in a ‘come and get me’ post-chemo-Walter White hiatus wig that is the film’s only flaw) know which way the underground wind is blowing, but before they can get topside to access their Myspace accounts, all hell breaks loose.

Is it Godzilla? Is it balls. British director Gareth Edwards understands that less is more (until he duly allows that more is more, and that eventually more is just a four-letter word). There’s an hour of slow build here that will please anyone who isn’t a bloody fool, so don’t expect the lolloping lizard any time soon. Cut to the present day, and the opposite edge of the Pacific Rim, where Cranston’s son Aaron Taylor-Johnson has just rotated back from a military tour of Iraq into the arms of wife Elizabeth Olsen. San Francisco. Golden Gate Bridge. We’ll come back to that later. Stay calm.

Edwards has clearly taken plenty from the liner notes from his Spielberg box-set (the film contains sly references to everything from The Sugarland Express to – oh, you betcha! – Schindler’s List), but he has some big, weird, utterly outlandish ideas all of his own. This is a film that has as much to do with James Cameron’s cinematic apocalypse as it does with the hellishly overbaked paintings of 19th Century art-loon John Martin. Both visions are beyond human understanding, both are based on the idea of some supra-natural Kraken we can never, ever hope to outrun, one that we may, in our weakest form of glory, have created in the first place. Balloon juice, perhaps. But Edwards taps into an elemental undertow that will suck down even the most casual viewer.

Put simply, this is a film that should not exist. It has one scriptwriter, an all-but untested director, a scope and vision that beggars belief, Viagra-delay money-shots and the patience and fortitude to pit the off-duty visions of Tarsem Singh and Peter Jackson against the legacies of General George S Patton and JMW Turner. And it cost – not that it should matter to any of those boys, or to us – $200m.

A camel, they say, is a horse designed by committee. This oddball thoroughbred could win the Grand National and the Kentucky Derby on the same day. Lift its lizardy tail, blow a kiss up its arsehole and let Godzilla pound your balls. You’ll be glad you did. It’s just glorious.

Everything’s in place, we just need the fury.