John Carpenter’s Apocalypse Trilogy and the end of faith

As The Thing turns 40, its place within Carpenter's exploration of spiritual breakdown has never felt more prescient. 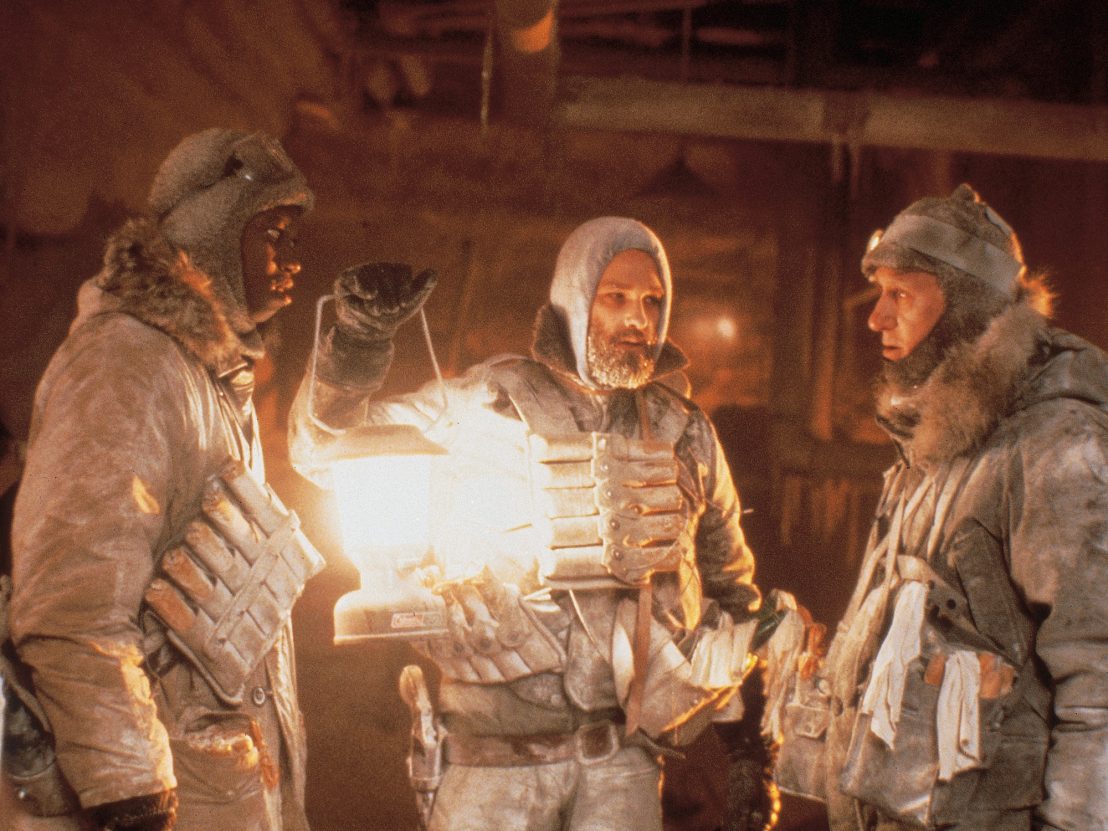 At the end of John Carpenter’s 1982 sci-fi horror The Thing, two men sit across from each other, waiting. R.J. MacReady (Kurt Russell), and Childs (Keith David) are the sole survivors of an attack on their arctic research station, committed by an alien parasite that can imitate other organisms. In these final moments, each man seems to wonder if the other is being imitated by the eponymous Thing. “Why don’t we just…wait here for a little while?” MacReady says to Childs. “See what happens.”

There’s a temptation to read The Thing, and its ending in particular, as a testament to paranoia – that this arctic attack by an alien force is the coldest of all Cold Wars – but in the end, the film feels rooted in the idea of faith. That, maybe in spite of themselves, both MacReady and Childs are holding out hope that they can keep faith in the other man. That one won’t transform and devour the other. The Thing is the first film in Carpenter’s Apocalypse Trilogy, followed by Prince of Darkness (1987), and In the Mouth of Madness (1994). While the apocalyptic DNA that the three films share might point towards the end of the world, the element that really binds them together is their shared preoccupation with the end of faith: in mankind, in God, in the self.

In The Thing, the body itself becomes untrustworthy, as the shapeshifting creature undermines the certainty that your fellow man is who you think they are. One of the first humans that the Thing tries to assimilate is George Bennings (Peter Maloney), but it is caught by his colleagues in the midst of transformation, fingers long and malformed, screeching its only way of speaking. MacReady insists that the creature isn’t Bennings, and, after immolating the Bennings-Thing, says that fully assimilated, it would have “looked and sounded and acted just like Bennings.” Faith in each other, and faith in the body itself, is rocked to its very core.

While The Thing is the most visceral film in the Apocalypse Trilogy, its two spiritual successors approach the idea of the end of faith in more abstract ways. For Prince of Darkness, faith is tested not by an absence of God, but instead the reality of His opposite number; a revelation that changes the characters in the film, both body and soul. The lines between our world and another, darker, more ancient one begin to blur, and the foundations of belief itself begin to shake.

1987’s Prince of Darkness feels like John Carpenter’s pseudo-precursor to Martin Scorsese’s own film about God and his absence: Silence. The nameless Priest (Carpenter mainstay `Donald Pleasance) references a “stubborn belief in common sense,” that runs through to the core of the film, and the other parts of the trilogy. Each of these films are about belief, and what happens when characters run up to the limits of what that belief can offer; what happens once they step off the edge of the map. The cosmic evil of an “Anti-God” in Prince of Darkness is, according to Pleasance’s Priest, something that the church has known about but chosen to keep secret, arguing that the church chose to characterise pure evil in a way that keeps “man at the centre of things.” 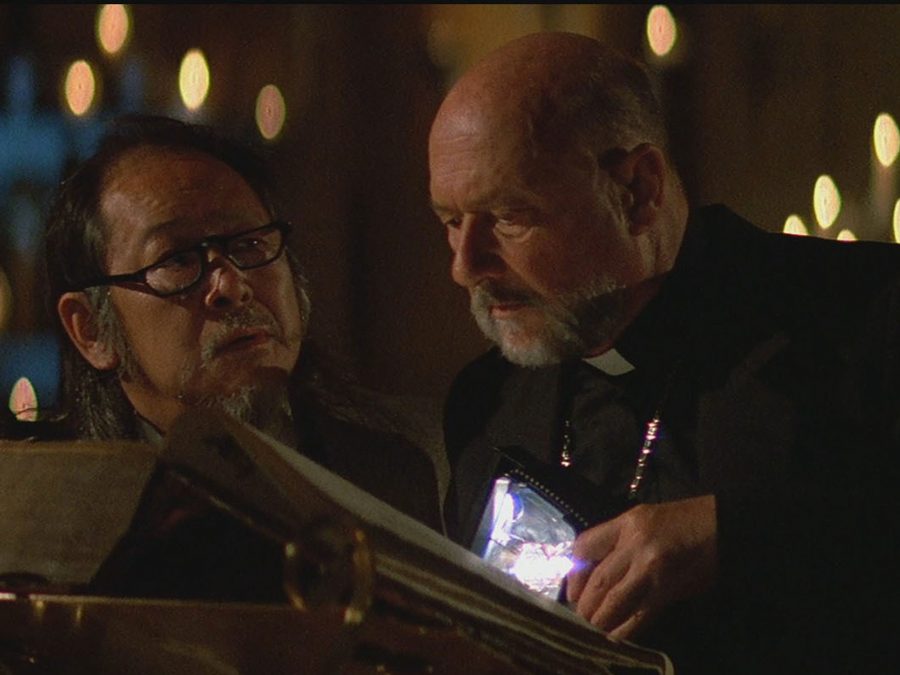 The discovery of this evil turns these assumptions – the centrality of man, the power of faith – on their head. It prompts a legitimate crisis of faith in the Priest, as he asks the void “Where are you, Christ? Where are you?” This is linked to the limits of faith itself, in how God or Christ, or even Satan can be understood – Prince of Darkness presents a spiritual evil that exists beyond the confines of spirituality as it is normally interpreted. Carpenter’s characters are forced to confront the fact that the world doesn’t function the way that they thought it did, and that the place of man is not as central as we once hoped. If the cosmic centrality of man is shifted, then the idea of what man can have faith in must be questioned – the answer may simply be silence.

Prince of Darkness – like The Thing – ends on a moment of uncertainty, cutting to black just before we find out if the world as we know it has ended. These two endings feel like a kind of cinematic Rorschach test: the choice belongs to the viewer, a test of their own faith. But In the Mouth of Madness, which sees Carpenter at his most Lovecraftian, doesn’t even offer the possibility of light. Here the apocalypse begins inward and slowly expands out to the rest of the world, as fans of the author Sutter Cane (Jürgen Prochnow, an iteration of H.P. Lovecraft) are seemingly driven to madness by his words, and John Trent (Sam Neill) – the investigator on his trail – begins to lose himself the deeper he finds himself drawn into Cane’s dark world.

As the story unfolds, Cane is revealed to be a conduit for an ancient evil that predates man – an evil that’s also hinted at in Prince of Darkness – something that brings through to our world through his words. These words change the world around them, forcing people to contort into new forms.Just before a farmer takes his own life with a shotgun, he says “I have to. He wrote me this way.”

Linda Styles (Julie Carmen), Cane’s editor, accompanies John on his trip, and when she has the truth of Cane’s power revealed to her, returns to John and continually repeats the sentence “I’m losing me”, a fate that’s set to befall countless others before a twisted, meta conclusion. All three of the films have this sense of “losing me” – that something integral about the characters is being lost, be it bodily autonomy or faith in God. In In the Mouth of Madness, that thing being lost is the self, the soul.

The conclusion of Carpenter’s trilogy feels at once bleaker and more bombastic than the two films that came before it. Rather than cutting to black before the moment of revelation, In the Mouth of Madness pushes right up to it, showing a world being changed by something strange and ancient. It is the perfect conclusion for Carpenter’s meditations on the end of the world and the end of faith, because here, both of those things finally run out. The final, morbid punchline of Madness reveals how fragile the concept of the self is in Carpenter’s trilogy, and that to lose faith in one’s self is the first pulling on a thread, which will keep unraveling until the end of all things.

Tags: In the Mouth of Madness John Carpenter Prince of Darkness The Thing 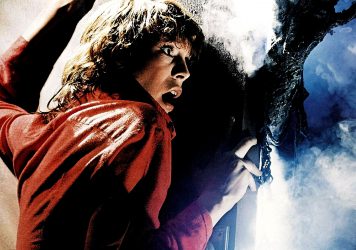