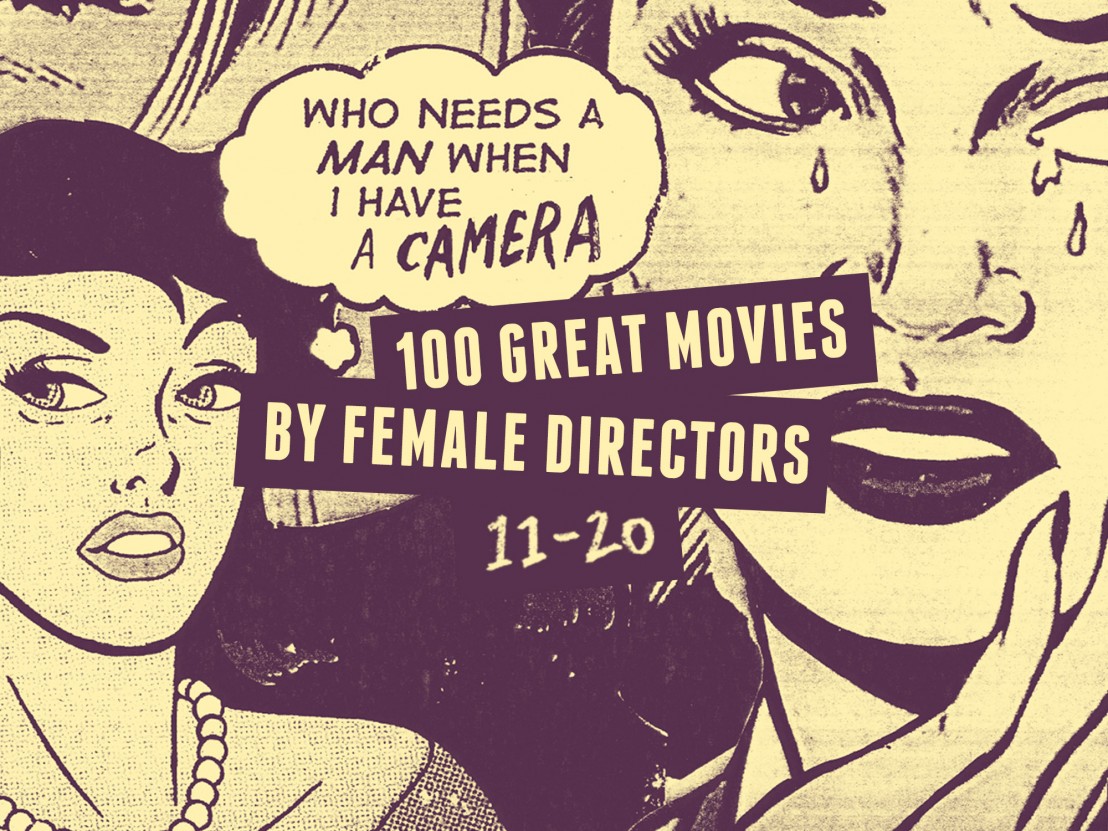 It is curious that our perception of the most creative and revolutionary of musical forms is defined by its visual representation. In the popular consciousness, jazz is an image before it’s a sound; the aesthetic appeal of cool. Cinema is a mythmaker, and it separated the look of jazz from the reality. In this sense, The Connection – like Bruce Weber’s Let’s Get Lost – is a reconciliation that bridges the gulf between the elegance and the squalor. It is a pioneering mockumentary that observes a group of musicians as they wait for their dealer. The cinematic facsimile of jazz – smoke-filled bars, suits and greased-back hair – is nowhere to be seen, replaced by the guttural existence of the jobbing musician whose life is at the mercy of heroin and music. Clarke’s camera confronts us with the proximity of this world in which transcendence is only found in music and death; and both are pursued with intense focus. Craig Williams

As great and important a film it is, we’ve opted to bench Vera Chytilová’s kaleidoscopic, anarchic 1966 classic, Daisies, in order to festoon ticker-tapes and garlands over her stunning, slightly lesser-known 1963 debut feature, Something Different. The film tells weaves concurrent tales of middle-aged women contenting with their wild varying social positions: on one side we have a housewife finding it tough to bring up her only son, and decides to juggle a male suitor; on the other we have a famous ballet dancer who is practicing tirelessly for a big competition. As with Daisies, the brilliance of this film stems from the fact that Chytilová doesn’t strain for meaning, never relying on clumsy dramatic twists or making any attempts to force a narrative overlap for fear of diminishing the poetic naturalism. In fact, by the end, it’s not even certain why the director chose to place these two women together in the same film – perhaps it’s a statement on human individuality and a stealthy attack on cinema’s predilection for crass and gender generalisation? David Jenkins

Forough Farrokhzad’s 20-minute black-and-white documentary set in an Iranian leper colony might as well bleed tears for the sufferers of this stigmatised disease. Her camera lingers on individual residents, indulging a fascination with deformity but then looking deeper, past infected skin, to the eyes of human souls forced to wear their difference like a punishment. The House is Black was Farrokhzad’s only film before she died prematurely in a car crash aged 32. She was and is best known for her poetry. This poetry is read out over the images, which imbues her subjects with a rich humanity. For the most part, the film is an emotional lament, but scenes of young leper children playing poses a question about how we project suffering based on appearance. Yet the final shot is one of resonant despair. We watch the lepers pushing closed wooden gates. Once they are safely shut in, we can see what the gates announce to all passers-by. White capitals read: LEPER COLONY. Sophie Monks Kaufman

Erotic repression stands in for the paranoiac woes of life in Soviet-era Russia in 1968’s Brief Encounters, a hushed love-triangle psychodrama presented with great poise and lyricism. Writer/director Kira Muratova, whose most recent feature, Eternal Homecoming, was made in 2012, also stars as an officious but furtively flighty government housing officer who trades on her mildly distinguished status to engage in a love affair with a drifter when he occasionally passes through town. Yet this arrangement is destabilised when her newly appointed, younger, perkier, prettier maid turns out to also be in love with the same guy. The film never degenerates to shouting or bickering, it just builds up the layers of suppression as each character refuses to open up lest their status be somehow corrupted. Muratova favours formal and emotional subtlety at every turn, which explains perhaps why this movie hasn’t been more wildly heralded as the melancholy humanist classic that it is. DJ

Wanda is the great underseen masterpiece of American cinema. The sole directorial outing of actress Barbara Loden, it endures as a piercing study of female suffering in a patriarchal world. Loden herself plays the title character; a woman who leaves her children in the custody of their father and latches on to a petty criminal for a life on the run. She is a person adrift, susceptible to abuse at every turn. Made in the same year as John Cassavetes’ Husbands, both films serve as stark, contrasting visions of gender roles at the dawn of the ’70s. The boorish aggressors of Husbands bend the world to their collective will, whereas Wanda is crushed by hers. She is an angel in white surrounded by the brutality of the Rust Belt. But while Wanda herself lacks a voice, the film is dominated by the force of Loden’s. CW

On paper Cecile Tang Shu Shuen’s The Arch is an old-fashioned melodrama about a widow and her daughter both falling in love with a visiting soldier, but her stylistically bold approach distinguishes it as one of the most exciting and influential debuts in Chinese cinema. Setting out to convey “the interior feeling of a woman,” Tang favours expressive visuals over dialogue, utilising montages, jump cuts and dissolves – as well as Subrata Mitra’s vivid cinematography – to craft a subjective portrait of Madame Tung’s emotional torment. Tang was an iconoclastic figure viewed with suspicion by the authorities, and a ban following her equally radical second film China Behind effectively ended her career. Phil Concannon

There’s a sequence in Stephanie Rothman’s bumptious prison island exploitationer, Terminal Island, in which a woman gets her own back on a sexually abusive co-habitee by smothering honey on his ass prior to stirring up a nearby wasps nest. Now, I don’t know if wasps are attracted to honey, but it’s a sign of Rothman’s I’ll-be-damned moxie, dry humour and no-fi industry when it comes to dialling up potentially stale violent encounters within a strict genre framework. This is John Carpenter in denim hotpants, with the set-up a model of curt, direct visual storytelling. The plot is introduced via a TV news team producing a bulletin on a new island penal colony reserved for those who commit murder. Attempts to transform it into a male-dominated collective farm where the women literally stand in for livestock don’t last long as a factionalist uprising takes place, and guerilla tactics are employed to see off the murderous foes. Ena Hartman steals the film as Carmen Sims, and the film was later re-packaged as a Tom Selleck vehicle, as he co-stars as a kindly, drug-addicted doctor. DJ

Imagine a movie which didn’t just contain tits, but was actually about tits? Doris Wishman was a vaunted trash auteur whose nudie genre flicks sit somewhere between the dumpster chic of Hershel Gordon Lewis and the wanton capitalising on voluptuous female forms that made Russ Meyer famous. This is her saucy take on a James Bond movie. Only this time, instead of a svelte misogynist in a tux, we have the uniquely talented exotic dancer Chesty Morgan and her gigantic bosoms, inside which have been implanted a spy camera – focus with the left, take pictures with the right. And despite the fact that, anatomically speaking, she’s not the most nimble of spies, it’s always amusing to see just how she raunchily overcomes each snarling male antagonist she comes up against. Chesty returned for a sequel later in ’74 called, of course, Deadly Weapons. DJ

There are those who gauge the greatness of a movie by simply attempting to deduce how influential it has been on the films that arrived in its wake. This form of criticism is an inexact science, to be sure, but when presented with a film like Marguerite Duras’s rhapsodic, modernist slow-dance to the music of time, India Song, it’s hard not to see it as some kind of “slow cinema” lodestone. Essentially a series of static tableaux taken inside a gigantic country mansion (filmed in Paris, though standing in for India), the film stars the great Delphine Seyrig as the lethargic wife of an Indian consul during the 1930s who chooses to surround herself with male stragglers. Formally obscurest in the most quietly dazzling way imaginable, the film is part ghost story, part political screed and part anti-musical, as nearly every scene is soundtracked to live cocktail jazz. It’s magnificent, and haunting, and singular – when I saw it, I had no idea what to make of it, but its every dazzling frame has been etched onto my memory ever since. And this idea of memory manifesting itself as a series of primal, paradoxical images is exactly what the film is about. DJ

Granted, Chantal Akerman’s 1975 film about a single parent housewife supplementing her income by laying with anonymous johns while her dullard son is at school, is something of a hard sell: it’s nearly four hours long; the large majority of the film takes place in a pokey, spartan apartment; there’s barely three pages of dialogue spoken over the entire runtime; and the grand dramatic pivot point is the moment in which Jeanne incorrectly buttons up her pinafore. But seriously, that such a seemingly banal action could encapsulate all the romantic tragedy of a 1940s melodrama, all the high drama of the first shark attack in Jaws, stands as testament to this metronomic masterwork of discipline and understatement, an incensed feminist essay on boredom and the pitiful lot of the working class woman. Some people might say it’s a movie in which nothing happens, and those people are what we call blind. An all-timer, this one. DJ