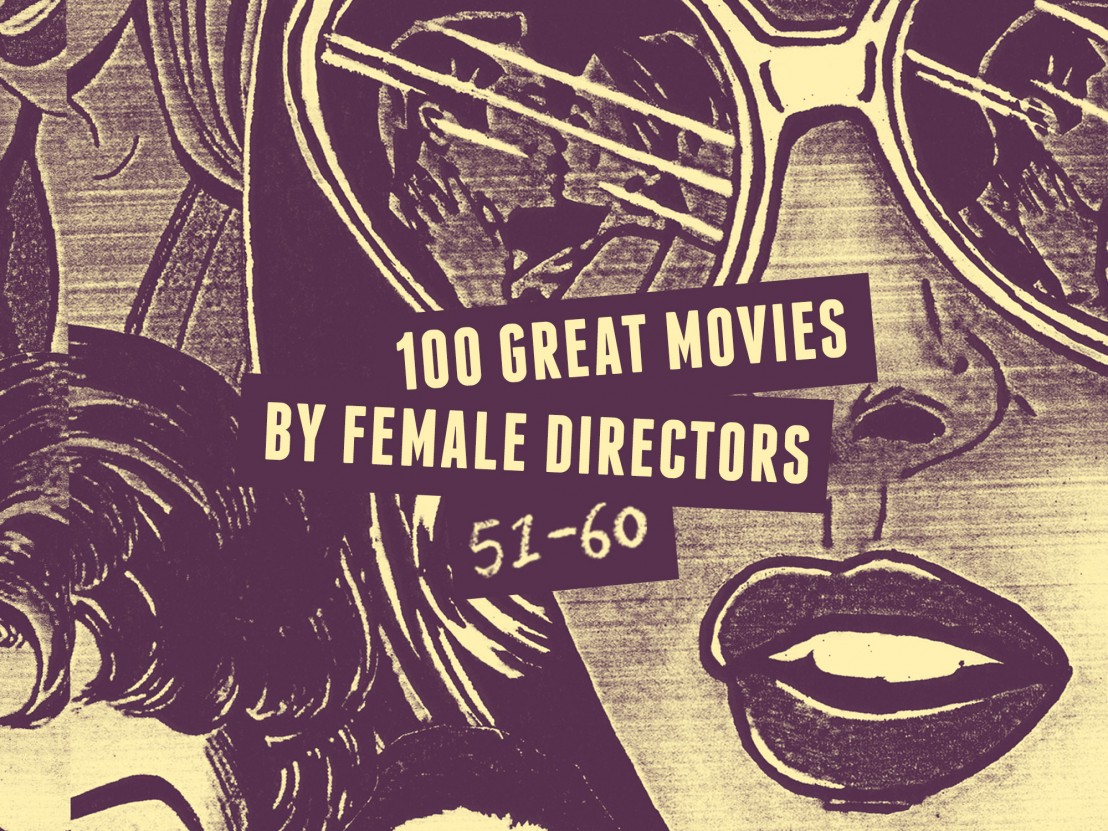 Kim Longinotto’s documentaries can be loosely divided into two camps: ones that embed in the meandering daily details of specific communities, and ones that focus on systemic processes. Divorce Iranian Style gets the closest to the heart of misogynistic power than any of her other films, bearing witness as the cases of women seeking divorce are adjudicated over with swift and sweeping judgements, often based on custom over wellbeing. Divorce, Iranian-style seems so casual and unselfconscious in the viewfinder of Longinotto’s camera. Long before Ashgar Farhadi brought us A Separation, the urgent need for scrutiny had been flagged. While largely staying in the court building, Longinotto’s innate empathy and desire to substantiate the people she documents means that she spends time with the female divorce-seekers, exploring the full details of their lives and situations and understanding in more detail than the judges will ever know what freedom from their spouses could mean. Sophie Monks Kaufman

Xiu Xiu: The Sent-Down Girl hasn’t always received the same critical respect as the ’90s other major films about the Cultural Revolution, in part because it was harmfully assumed that director Joan Chen – who was and still is best known to the Western world for her playing Josie Packard in Twin Peaks – was not a “serious” artist whose work deserved to be considered in the same breath as that of Tian Zhuangzhuang (The Blue Kite) or Zhang Yimou (To Live). Xiu Xiu, which is rather broadly accessible for a coming-of-age drama about a teenage girl who is relocated to remotest China as part of a Communist initiative, was seen as a Miramax telling of its story. In reality, Chen’s heartbreaking pastoral tragedy (which is now nearly impossible to find in a format that preserves its original beauty), uses its crisp emotional beats to boldly advance the feminist stirrings of China’s 5th Generation filmmakers. Today, the film doesn’t only feel like an authentic product of her birth country’s past, but also a heavenly emblem of what the global community still aspires towards for our collective future. David Ehrlich

It’s astonishing to think that Samira Makhmalbaf’s The Apple is not only a debut film – shot in just 11 days – but also the work of an eighteen year old. (Not to be outdone, her younger sister Hana directed her first film at 15.) Blurring the lines between documentary and fiction to confrontational effect, the film was an immediate response to a nationally reported news story, in which an Iranian father had kept his blind wife and two young daughters under house arrest, with no outside social contact. Makhmalbaf re-stages the provincial drama with the actual family, the use of the two disabled girls drawing criticism at home and abroad. The ethical questions of The Apple’s approach remain for each individual viewer, but there’s no denying the metaphor for the wider patriarchal value system it decries, nor the symbolism with which its imbued, as rich as its visual poetry is elegantly simple. Matthew Thrift

It is hard to distinguish Kimberley Peirce’s filmic dramatisation of the Brandon Teena story from Hilary Swank’s central performance. Inasmuch as the story hinges around a brutal tragedy, it’s also a vessel for a fascinating trans character, explored with utter commitment and beguiling believability by Swank. Peirce understood the importance of casting the right person and interviewed hundreds of actresses over a three-year period. Swank lived as a man for a month prior to the shoot, “strapping and packing” (her words). She took as her entry point humanity rather than gender. Her Brandon exudes a passionate life force and a flirtatious charisma. Attraction between Brandon and Lana (Chloë Sevigny) blooms in the dank Nebraskan nowheresville in which the only pastime is getting fucked up. Their tiny flame would seem vulnerable in the menacing company of the increasingly unhinged, John (Peter Saarsgard) in particular. That the audience is in on the secret of Brandon’s female anatomy adds an almost unbearable level of dramatic irony. Peirce never gives in to trashy thriller tactics, even as the threat level rises. Boys Don’t Cry carries the full negative weight of intolerance while never losing sight of Brandon’s sense of self-determination and capacity to love. Sophie Monks Kaufman

In October of 2013, news came down the wires that the British director Antonia Bird had died. It was all the more shocking because she had shunned the limelight from the beginning of the ’00s, a limelight many thought the movie world would have been happy for her to bask in on the back of films like 1994’s Priest and 1997’s Face. Her best work, though, was also her most high profile, a strange, metaphorically fecund gothic horror film which depicted human flesh as a strength-possessing elixir, thus causing two soldiers posted in a far-flung Sierra Nevadan outpost to gobble down their fill. Starring Guy Pearce and Robert Carlyle (going full Begbie), Bird’s film is memorable because of its countless idiosyncrasies: the deliberate pacing of the story; the pitting of two anti-heroic characters against one another; the insidious homoerotic subtext, and an extremely eerie soundtrack by Damon Albarn and Michael Nyman. David Jenkins

Men in uniforms, in the burning desert, carrying out physical training. On a purely visual level, Beau Travail already ticks all the boxes of a gorgeous movie, but Denis avoids the pitfalls of superficiality this approach often entails, as the beauty of the image constitutes the film’s raison d’être. In this story of desire, form and content, image and plot are inseparable. The camera of cinematographer Agnès Godard watches these men like an enamoured viewer, maintaining a perpetual erotic tension between holding on and letting go, seeking them out with a desperate insistence, as if afraid of losing them off frame, but also carefully allowing them move across the screen. If the sustained sensuality of the image evokes the aesthetic of female pleasure itself, it is also an overwhelmingly exhaustive use of the basics of mise en scène. As opposed to the “male” cinema of plots and stories, corporeally-inclined female filmmakers such as Denis point towards a reconciliation of cinema with its own material basis in the image. Elena Lazic

Even Liv Ullmann’s most recent film, an adaptation of Strindberg’s Miss Julie (still criminally unreleased in the UK), with its tight walls bearing down on the fraught psychodrama within, carries the ghost of Ingmar Bergman. “It’s not just my artistic life that’s intertwined with his,” she told Roger Ebert, “but my whole life.” One of the most gifted actors of the 20th century, Ullmann was the Swedish titan’s lover, muse and frequent leading lady, and Faithless in many ways their most nakedly autobiographical collaboration. An ageing filmmaker (credited as Bergman) conjures the ghost of a past lover, exorcising his guilt through a work-in-progress. A Brechtian framing device sees the couple enact a retrospective therapy, as episodes from the past (the film?) play out like Ullmann’s Scenes From an Affair. Bergman’s screenplay charts the arc of self-inflicted destruction – the forward march into inevitability – but it’s Ullman who finds the nuance, the gestures and micro-sparks of emotional connection and withdrawal that lead inexorably to tragedy. MT

With American Psycho, Mary Harron acknowledged the limitations of adaptation while simultaneously playing to its inherent strengths. Eschewing the distinct strain of melancholia in Bret Easton Ellis’ infamous novel – a result of authorial catharsis born of familial strife – Harron chooses to focus on the book’s more elaborate comic grotesquerie, finding vast riches in the its preoccupation with appearances. Harron recognises that Patrick Bateman – the titular homicidal stockbroker – is a character defined entirely by his actions, and his lack of an inner life makes him ripe for cinematic transition. Ellis’ more personal flourishes are tempered, thus rooting the film entirely in Bateman’s subjectivity. He is a vessel of fastidiousness which frequently tips into mania, and Harron pitches the picture somewhere between these fluctuating states. As the film shifts from Patrick’s hilariously overwrought meticulousness to the giddy, cartoonish violence, Harron holds it together by maintaining an arch, ironic tone throughout. Her control is impressively unwavering. Craig Williams

Catherine Breillat makes films about the difficult totality of sex; they are relentless in their pursuit of an ideal physical communion divorced from the onus of romance. Her focus has always been on female sexuality seeking to shed itself of the burden of romantic and maternal expectations. Hers is a cinema of bold physicality and exacting philosophical rigour, unflinching in the face of horror. Where her masterful 1999 film Romance sought to shed emotional faultlines altogether, A Ma Soeur! channeled them into approximations of sororal affection rendered with something approaching sympathy. It is a story of sexual awakening by proxy, with 12-year-old Anaïs watching her 15-year-old sister’s summer fling with grim fascination. Breillat’s ruthlessness is initially forsaken for a sense of blunt curiosity before eventually giving way to a horrific finale. It is a moment of distressing coalescence where the director’s vision comes full circle; worryingly nihilistic perhaps, but certainly unforgettable. CW

It is no faint praise to say that Nicole Holofcener is eligible for the mantle of ‘the female Richard Linklater’ due to the breezy but affective nature of her world-building. Lovely & Amazing, her second feature, is a slice-of-life ensemble drama which passes by in a succession of fresh moments. As is her wont, Holofcener assembles a cast of brilliant, slightly under-the-radar actors who come together believably as a discordant family unit. Brenda Blethyn is the hospitalised mother to Catherine Keener (Holofcener’s muse), Emily Mortimer and Raven Goodwin. Her daughters are artistically inclined drifters with enough pride to push back on the norms of their world around them. Comic vignettes linger, as do the poignant ones. A young Jake Gyllanhaal pops up in the One Hour Photo where a down-on-her-luck Keener takes a job, and his crush leads to a slew of ridiculous, enjoyable and inappropriate scenarios. Nothing ever really works out as planned in Lovely & Amazing but characters beat on anyway with endearing laissez faire. SMK