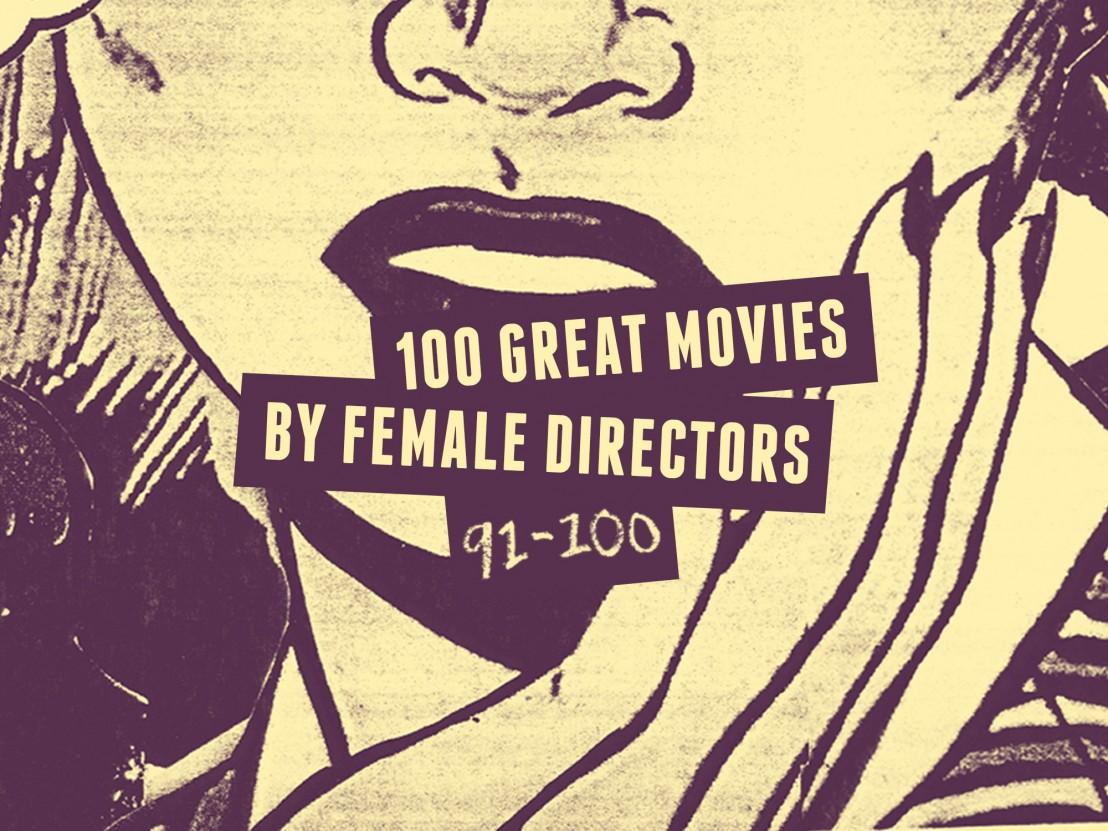 Haifaa Al Mansour, like Jafar Panahi, belongs to the special class of filmmakers who are rebelling against a culturally restrictive state by the very act of making movies. Filmed in secret in Saudi Arabia, Wadjda’s independent spirit extends from the director’s off-screen motives to the nature of her on-screen heroine. Wadjda is a 10-year-old girl who is unfazed regarding what school and society expects her to be. She wants a bike like her male best friend. And that’s that. Except in the background. Al Mansour drops characters in different states of captivity and fear and who make Wadjda’s character seem miraculously progressive by contrast. The young star, street-cast Waad Mohammed, gives a delightful performance. She has the cheekiest smile and the most optimistic of energies. Al Mansour lets her have fun with her role while writing in complex familial relationship. Wadjda’s mother is played by Reem Abdullah, one of the biggest female stars in Saudi Arabia. Sophie Monks Kaufman

“Cinematography by Agnes Godard” should be enough to convince anyone to watch Ursula Meier’s Sister. Better known for her work with Claire Denis, Godard’s soft, dark tones and her emphasis on texture and surface are central to the relatively recent and largely female-driven “cinema of the body”. Focused more on physical presence and sensations than on story or plot, this “haptic” cinema is diametrically opposed to the didactic, action-driven progression of mainstream and, yes, male cinema. As it follows the experience of a child, Sister is all the more inclined to eschew plot in favour of a series of encounters that are either brutal, tender, or both at the same time – and look out for an overwhelming cameo. Ursula Meier’s film avoids clichéd relationships and easy resolutions even as the cruelty of the situation howls for them; it’s the quiet restlessness of the image, the dormant possibility for change, that makes Sister feel like a bitter yet welcomed breath of fresh air. Elena Lazic

Josephine Decker consecutively released two features: Butter on the Latch and Thou Wast Mild and Lovely, which make for a complementary and disturbing double-bill. The former edges it as the most logical place to start a Deckerthon – a cinematic realm where sensuality arises out of situations that don’t sit right. Butter on the Latch begins in New York with Sarah (Sarah Small) watching a play and then receiving a phone call from a friend who has woken up in a strange house surrounded by strange people. Sarah becomes hysterical before going on a bender and waking up topless in a not entirely dissimilar situation. Such an opening usually sets in motion a plot that uses traumatic events as a coherent narrative drive. Not so here. Sarah’s next move is to leave for a folk music camp in the woods with an old friend named Isolde. A hand-held camera captures the look and sound of flora, fauna, hippy music and an intimate catch-up between friends. It’s like the film has reset and start again. Decker addles our expectations, further confusing the mood as we become almost drunk on the outdoorsy ambience. The climax is incredible and worthy of a million different readings. SMK

Part Abbas Kiarostami, part Tsai Ming-liang, and all astonishingly true to the soul and spirit of the film that has entombed one man’s past as a screen on which to project a communal dream, A Thousand Suns needs only 44 minutes to revitalise, and reaffirm the most important Senegalese movie ever made. Djibril Diop Mambéty’s 1973 film Touki Bouki borrowed from the French New Wave to convey a Senegal that was wracked with inner turmoil over the undeniable allure of hybridisation. By responding to her uncle’s masterpiece some four decades later Mati Diop created a masterpiece of her own, following the actor who starred in Touki Bouki (Magaye Niang) as he hitchhikes to a free screening of the project that once had him entertaining dreams of traveling to Hollywood and working alongside John Wayne. Jarringly intercutting “documentary” footage of Niang’s night and images of the aging farmer wandering through the snows of Alaska to find the woman who once played his love interest, the younger Diop stands astride the intersection between the real and the imagined, conflating the two so as to trace how Niang’s reality was fractured by his brief second life as a movie star. As Niang drunkenly tells a friend who’s trying to protect him from falling into the sea: “You don’t have a home until you’ve left, and as soon as you’re gone you can’t go back.” David Ehrlich

Forty one minutes of pure perfection. Jodie Mack is a UK-born, US-based stop-frame bricolage artist whose style recalls Jan Švankmajer by way of Stan Brakhage and Norman McLaren. This 2013 opus sees the director pitching her jaunty wigwam in her mother’s failing poster concession and producing an animated rock opera which just might be one of the greatest films ever made about a mutually loving relationship between a mother and her daughter. The glorious tumult of inventive sequences was enough to bring tears to this viewer’s eyes – the energy and diligence in every frame presenting someone intent on making something worthy of the woman she reveres, respects and pities. Ironically, the film is also an affirmative cut-and-paste statement about how one tangible entity (a warehouse outlet in its final throes of life) gives life to another (a film shot on 16mm about the death of poster culture). And if that wasn’t enough, Mack has recorded an album’s worth of of AM rock covers with spruced-up lyrics which offer a wry commentary of her ma’s unfortunate predicament and the decline in appetite for posters due the steamrolling of digital. It’s the very encapsulation of bittersweet, at once utterly joyous and stealthily heartbreaking. David Jenkins

Desiree Akhavan’s brand of humour is rooted in a combination of alert thoughtfulness and total deadpan. As the writer, director and star, she is never still. Her script and performance is always reaching for something, be it a punchline or a gut-punch. The pleasure comes from watching these forces play out via Akhavan’s physicality. The camera adores her exotic features which are offset by dialogue spoken with a dry New Yorker emphases. Her natural delivery rapidly and breezily undercuts friends, her ex-girlfriend and family alike. Nothing stagnates when she is around. Ideas, sex scenes, worry and sadness all bounce along driven by the same sharp mind. Appropriate Behaviour – as Akhavan’s debut feature – is a showcase for all of her talents but who’s to say that in ten years there won’t be another ten other films to vie for the title of her best work. SMK

Every so often a film comes along with such weight that it temporarily obliterates the part of the brain responsible for speech. Signe Baumane’s debut feature animation is about five women in her family that experienced mental illness – four in silence and the fifth one, her, with words, images and a huge amount of detective work into her relatives’ lives. The brilliance of Rocks in my Pockets stems from the style with which Baumane talks about suicide and suffering. Subjects that are usually discussed in reverent whispers are animated with rich symbolism accompanied by Baumane’s fabulously blunt narration. Rather than skirt anxiously around the subject of mental illness, Baumane deploys the cinematic force of immersion, recreating with a mix of stop-motion and hand-drawn animation the surreality and vividness of the emotional landscapes she is investigating. Meanwhile, she is delivering a snappy history lesson providing the daily details of growing up in Soviet Latvia. There are stories within stories. Profound insights are flung out with breathless speed. The effect is dizzying and wonderful. Not only has Baumane taken ownership of her personal and familial suffering, she has also launched herself as an inspirational creative force of nature. SMK

Perhaps an early self-schooling in the masterworks of Carpenter, Craven and Cronenberg is to blame for my indifference to modern horror cinema. Or maybe the genre has simply crossed over into the derivative realm of postmodernism. Either way, it’s extremely rare for a contemporary chiller to have a profound effect on me, no matter how willing I am for something to jolt me from my seat. Enter Australian writer/director Jennifer Kent’s assured feature debut, The Babadook – comfortably the scariest film of 2014 and quite possibly the current decade. It’s not just the eponymous shadow-lurking spook and repeated use of a creepy bedtime rhyme that makes The Babadook so unnerving, but the manner in which Kent taps into the emotion of fear. We all know there’s no such things as ghosts, but when someone is unable to escape the demons occupying their own mind – now that’s properly terrifying. That Kent manages to elicit a knockout central performance from Essie Davis as the rapidly unravelling single-mother who’s suffered a recent psychological trauma only intensifies her film’s impact. Good horror has the power to shock you in the moment; great horror stays with you long after the lights come up. Adam Woodward

It’s surprising and shameful to think that in the half a century since his death not a single narrative feature has been made about Martin Luther King, Jr. All that changed earlier this year, however, when an emerging American director by the name of Ava DuVernay announced herself with one of the richest and most essential historical dramas in memory. The timing of Selma couldn’t have been more pertinent. With the deaths of Eric Garner and Michael Brown having plunged America into its worst civil conflict since the 1992 Los Angeles Riots, DuVernay’s film served as both a timely reminder of the progress made during the African-American Civil Rights Movement and a rallying cry to everyone who acknowledges that there is still plenty of work to be done. A powerhouse lead turn from Britain’s David Oyelowo coupled with Paul Webb’s rousing script – made all the more impressive by the fact the speeches were withheld by Dr King’s family estate – gives the film added resonance. Whatever direction Steven Spielberg decides to take his long-mooted MLK biopic in, he’ll have a hard time surpassing Selma. AW

Making movies asks that we ignore the realties of time. Ignoring the penis-measuring antics of the one-take wonders who seem to be cropping up ever more increasingly, a cut is a statement about time passing, a gap which requires viewers to consider what might have been there. Few rely on the melancholic power of the edit more than French director Mia Hansen-Løve, who with her sublime fourth feature compresses the instigation and decimation of an entire cultural movement into a single feature runtime. Based on the life of her brother Sven, a house DJ throughout the ’90s, the film follows the mild-mannered Paul as he attempts to dedicate his life to spinning wax platters, making people happy and keeping aloft the torch of a very specific sub-strand of electronic music. It’s a staggering work, the director’s best, at once a careful extrapolation of artistic scenes and cultural burn-out, and also about how time and change are inextricable from one another. DJ 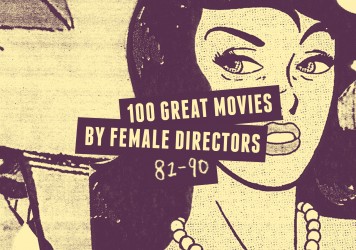 The Brits are out in force in the ninth segment of our massive celebration of women who make movies.