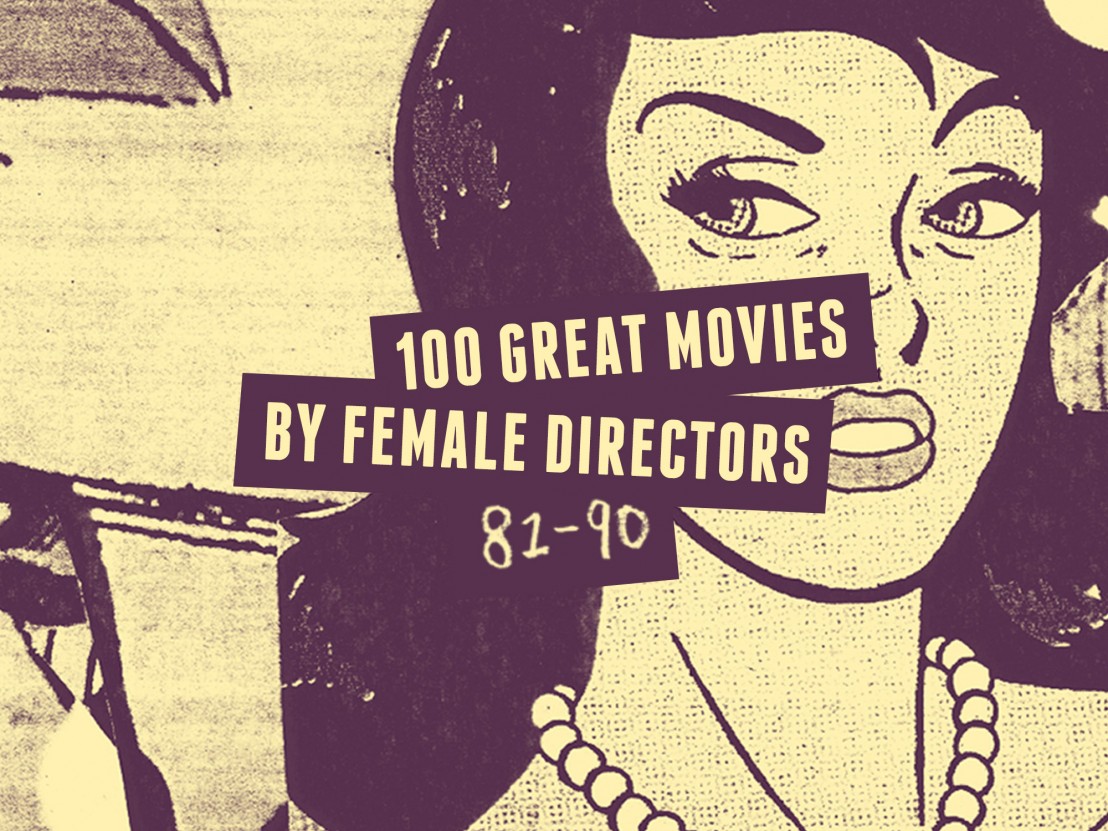 The Brits are out in force in the ninth segment of our massive celebration of women who make movies.

Picking a favourite Joanna Hogg movie out of Unrelated, Archipelago and Exhibition is basically futile. Each slays its subject while being distinctly the work of a woman who is pushing cinema to a fascinatingly personal place. 2007’s Unrelated showed what happens when we attempt to run away from responsibilities, while 2013’s Exhibition methodically unpacks a marriage that is either failing or flourishing, depending on viewer perspective. Archipelago – her middle child – is a family tract. Hogg’s art-house friend turned Marvel supervillain, Tom Hiddleston, sports a curly mop as Edward, stretching his polite British mannerisms across a sea of simmering tension. Conversation is stilted and arguments are heard bouncing through walls and up stair wells. Camera angles cut people off and no one can pitch their thoughts to align with another’s frequency. Archipelago is about stilted family relationships and the difficulty of communicating. My dad fell asleep as we watched it together, which just goes to show how impossible it is to make your flesh and blood sign up to what you find important. Sophie Monks Kaufman

Full disclosure: I wasn’t overly enamoured with The Selfish Giant, Clio Barnard’s anti-fairy tale from 2013. It’s not a bad film – not by any stretch – it just didn’t quite grab me the way I’d hoped. Perhaps that first viewing experience was doomed from the start. After all, the British director’s previous (and best) film, The Arbor, had affected me so profoundly as to foster unrealistically high expectations for her next project. Barnard employs an experimental docu-drama approach, enlisting actors to lip-synch interview extracts, in order to blur the line between fact and fiction. Art, memory, representation and truth are skilfully deconstructed in what is ostensibly an unconventional portrait of ’80s playwright Andrea Dunbar and the Buttershaw Estate in Bradford where she grew up. Dunbar died aged 29 after suddenly succumbing to a brain haemorrhage in her local pub – a desperately sad end for this “genius from the slums” – leaving behind two orphaned daughters, Lorraine and Lisa, who went on to lead drastically different lives. Barnard’s film is a requiem for Dunbar’s children – not just Lorraine and Lisa, but everyone throughout working-class Britain. Adam Woodward

After the remarkable success of Winter’s Bone, Debra Granik slipped off the radar. When she resurfaced with a documentary three years later, it only made her absence all the more confounding: why would someone with such a staggering faculty for working with actors decide to forego working with them in the first place? As sobering as a crack of cold mountain air, this bracingly immediate story of family, honour, and OxyContin in the Ozarks never feels the least bit prettified for coastal audiences – it’s all the more impressive now that Jennifer Lawrence’s leading turn is still so instinctive and true, quickly shivering off the burden of the fame that the actress was able to leverage from it. Like Breaking Bad without the warm layers of glorification, Winter’s Bone is a collection of performances so real that documentary might have been the only logical place for its director to go next. David Ehrlich

The mood that Athina Rachel Tsangari evokes in Attenberg is as deadpan as the films of countryman/collaborator, Yorgos Lanthimos, but with sincere emotional motivation dialled up to a discernible level. The divine Ariane Labed (Alps, The Lobster) stars as Marina, the lead half of a pair of female friends. A key pleasure is watching the duo, in nearly identical dresses, silently performing a synchronised march/dance/movement thing as gravel crunches beneath sensible black boots. Their activities are respite for Marina who dotes on her sick dad. ‘Dotes’ is a misleading term because it evokes sentimentality. Daughter and father communicate in their own strange shorthand which sometimes extends to leaping about making monkey noises. Marina looks to the animals frequently in the form of the stars of David “Attenberg” Attenborough’s programmes. Attenberg is delightfully odd, paced with enough pauses for peace and enough dialogue for diversion. There is something scratchin’ from underneath the stylised surface: a girl wanting to become a woman on her own bestial terms. SMK

Dreams of a Life is basically the celluloid equivalent of a monument to an unknown soldier. The soldier in question was Joyce Vincent, a woman found dead in her north London flat after lying there for three years undiscovered amid half-wrapped christmas presents. Carol Morley read a brief newspaper article outlining the case and was so moved that a person could fall off the face of the earth without anyone noticing that she dug deep into the details of Joyce’s life. Part recreation (Zawe Ashton fills in for Joyce), part interviews with those that once knew the deceased, Dreams of a Life is wholly a stirring look at how easy it is fall through the cracks. Morley is dogged in putting together the fragments of this human mystery and in tracking down the people whose lives Joyce touched before drifting away. They just presumed she had moved onto other things and are dazed and guilt-stricken by the grisly truth. Morley is not overtly preaching to us to reach out more generously and more frequently and yet I know I’m not the only one who came out of the screening and immediately phoned an old friend. SMK

A coming-of-age story that captures the purity and confusion of youth as perfectly as any movie ever made, Tomboy follows an androgynous kid named Laure whose family moves to a new neighbourhood outside of France. Laure’s sex isn’t revealed until she’s shown taking a bath one evening, the camera confronting the anatomical truth that its young subject keeps like a secret. Sciamma’s frank approach to this scene functions like a silent confession – we feel how invasive it is to learn what Laure so desperately wants to keep private, but the information is presented discretely enough for us to intuit how irrelevant Laure’s genitals are to her gender. Few filmmakers love their characters so much, and even fewer so sensitively understand how they struggle to become themselves. This is a perfect movie, 82 minutes of correct choices all working in sync. DE

When it comes to screen performances by actors who are far too young to understand where they were, what they were doing and even what a movie is, then Jacques Doillon’s Ponette from 1996 holds some kind of giant, triple-tier victor’s trophy. While this barely 60-minute feature from French director Valérie Massadian is very similar in tone and style, it is astounding in its own right. Nana is the smiley, carefree tot who is caught up in the blazing row between her parents, though she has no comprehension of the extreme violence which almost (but not quite) brushes up against her charmed existence. Hinting at gothic horror, the crux of the story takes place in a remote woodland cabin where Nana and mother exist in relative peace, yet when the latter finds cause to head away, she leaves her defenceless daughter alone. What could so easily have been an alarmist social issues drama about parenthood and family degradation, Nana instead celebrates the innocence and freedom that comes from emotional immaturity, the director’s sensational movie harking back something that’s almost a hard-nosed, classic-era B-movie, and almost a magical realist reverie in the Lewis Carroll mould. David Jenkins

You may not recognise the name but the face will be familiar. Mania Akbari was the main actor who starred in Abbas Kiarostami’s 2002 film, Ten, her now-iconic image seared onto the collective consciousness via a camera locked to the dashboard of a car as she drives around Tehran and interacts with all echelons of society. The sub-theme of female empowerment in that film is carried over to Akbari’s own remarkable 2011 directorial project, One. Two. One., which charts the slow but steady reintegration of a woman back into society following an acid attack to her face. Playing out in a series of careful, doleful, conversational vignettes, Akbari refuses to make this a film which accepts women as second class citizens, instead placing the focus on femininity, beauty and body image. Though some might spy Akbari’s creative roots as a some-time video artist in the compositions and the relaxed, not-quite-naturalistic tempo of the dialogue, there’s a collective power to these scenes. It’s a film which shows how simple the process of gender equality could be, but the sense of hope is always dashed with a hint of playful resentment rather than all-out anger. DJ

When Ruben Östlund’s Force Majeure played at the 2014 Cannes Film Festival, a small but significant number of the audience were, possibly under their stale breath, hollering the words, “Julia Lokev got their first!” And they’d be right; in 2011, Loktev unveiled her follow-up to 2006’s super intense suicide bomber drama, Day Night Day Night, and many were not entirely sure what they’d seen. Gael García Bernal and Hani Furstenberg star as a loved-up pixie couple. So loved up, they’re actually rather unbearable. They hold hands, they nuzzle, they call each other pet names as they skip and canter through the Caucasus mountain range – a true vision of happiness. And then something happens. It’s a random event, completely spur of the moment, which requires that our heroes react with their hearts rather than their heads. And from that point forward, the emotional dynamic is flipped on its head. There’s no more hand-holding, no more nuzzling, no more pet names and no more skipping and cantering. It’s something else. Not hatred – something more complex. Loktev insists that the audience takes sides in the film’s second half, which is bold and brilliant move. DJ

You often hear critics talk about certain films as being ‘personal’ works, but what does that really mean? Sure, a director may choose to draw upon a first-hand experience or invest an element of autobiography into a project, though by that definition ‘personal’ could be used to describe practically every film ever made. Sarah Polley’s 2012 documentary, Stories We Tell, is a personal film, and yet to use that word feels somehow reductive. Because while the subject matter is especially close to Polley, in truth this is a film about all of us. A constantly surprising, endlessly fascinating family portrait in which the paradoxes of the human condition are picked apart and laid bare over the course of 109 devastatingly brilliant minutes. It’s a film that is perhaps best experienced alone, though if your immediate reaction is anywhere near as intense as ours you’ll find yourself reaching out to a loved one the second the credits roll. AW