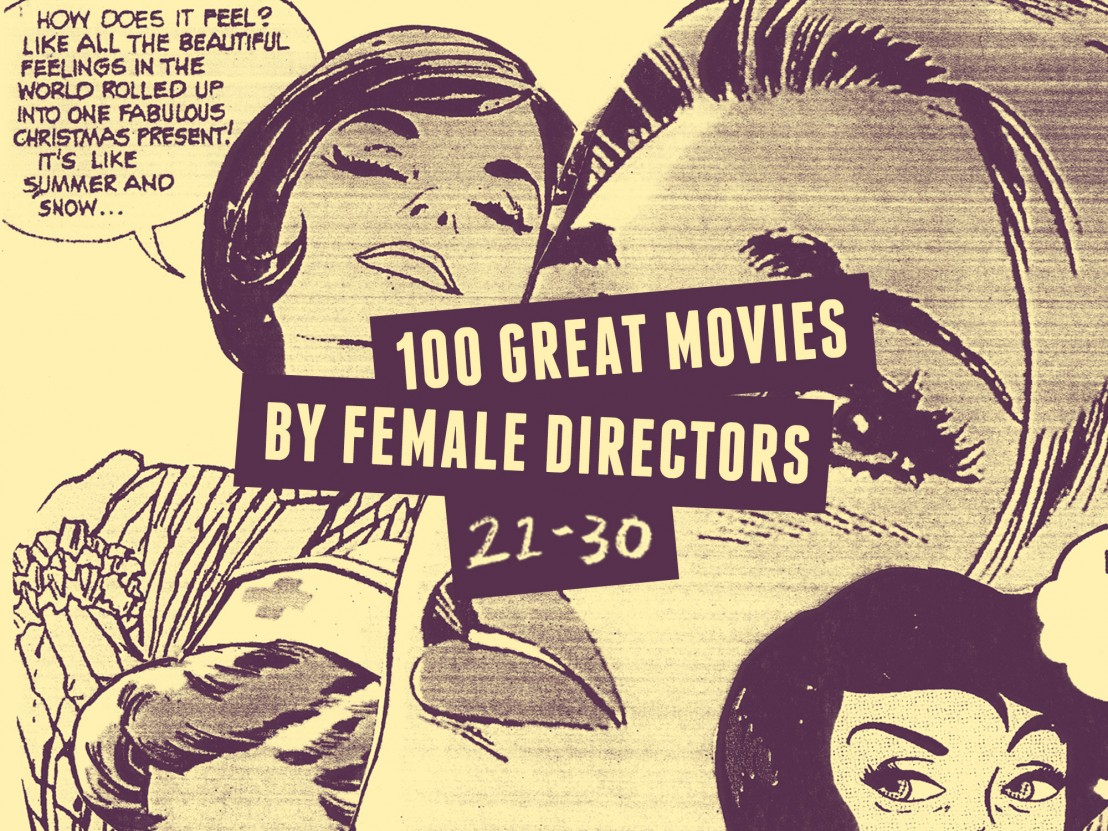 When Werner Herzog complained that “The images that surround us today are worn out, they are abused and useless and exhausted,” Lina Wertmüller must have heard him. Seven Beauties is the work of someone who implicitly understood that most depictions of the Holocaust had all culled from the same tired bank of images and notion, and its solution to that problem comes in the form of Giancarlo Giannini’s Pasqualino Frafuso, a living cartoon whose nature and behaviour overthrow age-old notions of survival – a man who would rather survive by surrendering his dignity than die by hanging on to it. By recontextualising heroism as an expedient form of assisted suicide, Wertmüller’s grotesquely clownish anti-hero rescued the Holocaust from being reduced to a genre. David Ehrlich

Barbara Kopple and her small crew paralleled the stamina of her subjects as they embedded themselves into a Kansas mining community over the course of a 13-month strike and beyond. From technically assured shots in mine shafts to crew knocked over as gunshots fire in the dark, the camera is a window and a weapon in following the epic journey of the strikers’ determination in the face of starvation, pinkertons and politically-motivated murders. It evidences a moment in history and influences it – quite literally in the sequence when the filming of a licence plate proves the whereabouts of a hired goon and leads to his arrest. A document of folk resistance both tragic and triumphant, a template that echoed in (less subtle) later films by Ken Loach and Michael Moore, and a record of what ordinary lives look like when principles and guns are at the forefront. Ian Mantgani

There are female filmmakers on this list who have worked in genre, often producing pictures in a style associated with a male gaze and then dashed a light feminist twist. Not so Larisa Shepitko, whose despairing, snow-swept World War Two story, The Ascent (note: the title is ironic), focuses exclusively on a coterie of gruff male characters and their life-or-death concerns. It follows a pair of Russian soldiers as they bravely venture into enemy territory to find food for their depleted battalion. Almost instantly their mission fails, as they’re captured by the German police and attempts are made to convert them into partisan spies. It’s a film of almost unique, sullen grimness, as Shepitko ultimately reveals the dark price of honour, and the even darker price of betrayal. David Jenkins

One of the occupational hazards that that comes from watching lots of old movies is that you have to remember to curb the amount of times you toss out the haggard old term “lost masterpiece”. You get the feeling from watching Claudia Weill’s Girlfriends that had it been directed by Woody Allen, it would be spoken of in the same quivering breath as Annie Hall and Manhattan. Due purely to the fact that it is a very little-known work – its notoriety recently reignited by the fact that Lena Dunham revealed herself as a super-fan and even had Weill direct an episode of ‘Girls’ – there’s a pre-embedded expectation that it will not be perfect, possibly explaining why it hasn’t been naturally swept up in the foamy tide of mainstream (or even counter-cultural) acceptance. Then you’re watching the film, and one scene goes by, and then another one, and you’re there, waiting for things to go wrong, looking for that inevitable slip-up to occur. And the longer you wait and the longer things casually refuse to falter, a sensation of excitement begins to swell. Melanie Mayron is the gawky Susan, a photographer looking for a job (she thinks) and a man (she guesses) and happiness (whatever that is). It’s the philosophical mellifluousness of Rohmer by way of the melancholy of Cassavetes, but very much its own thing. This film is special because every shot begins at the exact right moment, and every shot ends at the exact right moment. The decisions that Weill and her editor Suzanne Pettit have made are what push Girlfriends from being a quirky curio to – sorry guys! – a lost masterpiece. DJ

Christa Klages, as played by Tina Engel, experiences two “awakenings” in this 1978 film by Margarerthe von Trotta – her second as writer and director. The first occurs, we assume, just prior to the film’s opening, in which Christa and two male accomplices rob a bank in order to keep a ramshackle liberal nursery school (replete with ugly poster-paint frontage) from closing its doors. The awakening is that the world is uncaring, that people are self-involved, that love is fleeting, and that if we don’t take care of business, then business will take care of us. The real killer blow arrives when the hippy-dippy proprietors of said nursery school refuse to accept the stolen loot, eventually ceding their prime trading spot to, of course, a sex shop. This terse and unsentimental film neatly apportions its run-time between actions and ideas: Christa feverishly searches for ways to keep her ideals alive in the knowledge that no-one will be looking out for her and that the law will likely get her eventually. She is trapped in a limbo for the duration, neither a failure nor a success in her endeavours. The young bank clerk held-up at gunpoint by Christa has dedicated her time to locating her aggressor, and their brief convergence in the film’s stunning climactic scene is what triggers that long-gestating second awakening. DJ

Pitched somewhere between a dry comedy and an anthropological nightmare, Joan Micklin Silver’s Chilly Scenes of Winter paved the way for Noah Baumbach and his sardonic ilk with its staccato knot of idealism and neurosis. Possibly the only worthwhile contemporary film set in Salt Lake City (okay, the judges rule that we can make an allowance for SLC Punk!), few works of fiction have ever so vividly captured the mania of romantic infatuation without being fully consumed by its sociopathic tendencies – though the movie entertains the idea that being crazy might be the easiest way to deal with love and other annoyances of living. John Heard is almost tolerable as the nice guy/aspiring stalker of a civil servant who falls for and aggressively pursues a married co-worker and is willing to follow her to the ends of the earth or the gynecologist’s office (whichever is further). Originally released as “Head over Heels” and then re-released a few years later with a darker ending and greater box office success, the movie asks one question: “What’s happy?” And it works because so well because Silver never so much as pretends to have the answer. DE

You’ll probably recognise the name Joan Tewkesbury from the credits of Robert Altman’s Nashville, as she was the writer of its cascading screenplay. Though working in TV for much of her post-’70s career, she did manage to direct this alluring and extremely poignant mood piece from a script by Paul Schrader and his brother Leonard. Its quasi-Dickensian set-up sees Talia Shire’s inquiring shrink decide to search her soul and her little black book of boyfriends after her marriage has fallen apart. Such a simple psychoanalytical notion – to glance back to our past as a strategy to explain the present – is played out as the ghosts of boyfriends past emanate from the woodwork, some confirmed as revolting, oily shysters, others changed men whose own experiences have left them with a renewed sense of human empathy. It’s a film deserving of a revival, not least for David Shire’s swirling, beatific score. DJ

Any fully paid-up member of the Judy Davis fan club will surely have a copy of her debut feature film, My Brilliant Career, front-and-centre of any homemade shrine. With all due respect to director Gillian Armstrong, you suspect that where Davis to have declined the lead role in this Austen-like riff on Pygmalion, then the film would have entirely faded from the collective memory. The title comes from the notebook of one Sybylla Melvyn (Davis) a dirt-poor daughter of the Australian dustbowl who is packed off to live with her rich aunt, and who brings her salty, confrontational charms with her. What initially appears as a comedy of clashing cultures, with Sybylla our conduit for mocking the haw-hee-haw customs and attitudes of stuffy arristos, develops into a story on the difficulty of a woman retaining her independence and dignity in the late nineteenth century. There are elements of Scarlett O’Hara in Davis’ character, her obstinance and resolve occasionally translating as counter-intuitive, especially when she’s got Sam Neill’s sympathetic, pillow-fighting dandy pining for her from afar, a man willing to accept her for who she is and not who she should be. And did we mention that Judy Davis is sensational? DJ

Only recently restored to its complete length after fading into obscurity following a homegrown critical drubbing on release, there’s no denying that Germany Pale Mother doesn’t lack for conceptual ambition. A subjective account of her mother’s life in Berlin during and after World War Two, Helma Sanders-Brahms tells a personal tale on a vast canvas, working through questions of memory and national identity via the microcosm of a relationship between mother and daughter. While its symbolism (insects crawling over the Nazi flag; a labour scene intercut with bombs dropping) may be as heavy handed as its ironic sense of humour (a painting of Hitler that won’t stay on the wall), a collage approach to archive footage makes a strong formal statement. More than anything though, it’s the politicisation of both gender and autobiography – personal and national – that proves so striking; it’s as much a commentary on feminism as it is fascism, one as much about the present as it is about the past. Matt Thrift

Based on Todd Browning’s 1932 film, Freaks, with a dash of Virginia Woolf’s gender-bending novel ‘Orlando’, Ulrike Ottinger’s Freak Orlando is an avant-garde odyssey through the fantastic Freak City. Unfolding over the course of five episodes, the film’s protagonist cross-dressing Orlando (Magdalena Montezuma) navigates her – or is it his? – way through a colourful carnival of bearded women, self-flagellating men and dancing Playboy bunnies. Layers of spectacle coalesce in a camp concoction that feels like Fellini crossed with John Waters with an anarchic, feminist twist. Ottinger exposes the vaudeville decadence the history of the world, exploring woman’s place in it. Simran Hans