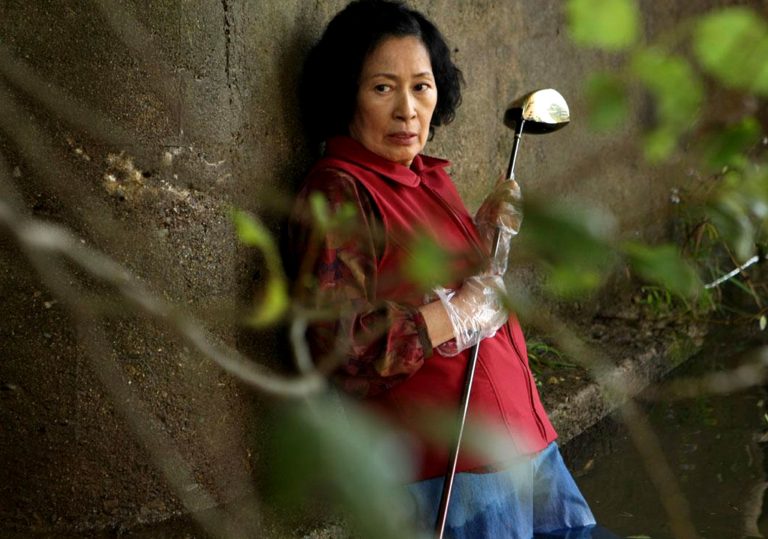 Bong made Memories of Murder and The Host. After those, we’d watch him make toast.

An extreme melodrama that queasily fuses horror, heartbreak and humour.

Knitting. Nagging. Making your tea. Just three things that Mother isn’t about. Following his cult monster-mash The Host – the highest-grossing film in South Korean history – writer/director Bong Joon-ho’s new movie is an elusive genre hyphenate: horror-comedy-mystery-thriller. Don’t be fooled. It might look more reserved than a B-flick about a giant flesh-eating tadpole, but Mother is just as dark, gripping and primal.

Bong knocks us off balance right from the start with a violent slapstick hit-and-run accident in a rural Korean village. The story revolves around the idiot of that village: 27-year-old Do-joon (heartthrob Won Bin) and his oddball single mother, played by Korean TV’s beloved matriarch Kim Hye-ja.

Darkness falls quickly, as a promiscuous schoolgirl is beaten to death by an unknown killer who leaves her body dangling from the roof of an abandoned building. Afflicted by a goldfish memory, sweet, simple man-child Do-joon can’t recall a thing. But given his violent explosions (don’t call him a ‘retard’), anything could have happened.

Yanked forward by sudden shocks, the plotting feels a little distracted by various sidetracks that pull us away from its title character. But once Hye-ja turns detective to find the real murderer, her maternal instincts go into overdrive and Mother quickly adopts the eerie vibe of Bong’s serial-thriller masterpiece Memories of Murder.

Putting a fresh spin on the thriller genre by using a middle-aged woman as its narrative engine, Mother’s special vibe derives from the uncertain knowledge that Hye-ja will do absolutely anything to prove her son’s innocence – whether he’s innocent or not. Regularly wrong-footing your expectations, this portrait of skewed matriarchy slowly untwists with a queasy black humour that syncs perfectly with the vivid performances.

Technically, it’s effortless. Wrapped up in a tremendous sound design and stylish cinematography, Bong’s film is at its best revealing both shocking surprises and sad secrets at a measured pace.

The film ends as surreally as it begins, never quite hitting the emotional tragedy that the director captured in Memories of Murder, but confirming him as the only man seriously vying with Park Chan-wook for the title of Korean cinema’s most talented dark master.

Bong made Memories of Murder and The Host. After those, we’d watch him make toast.

An extreme melodrama that queasily fuses horror, heartbreak and humour.