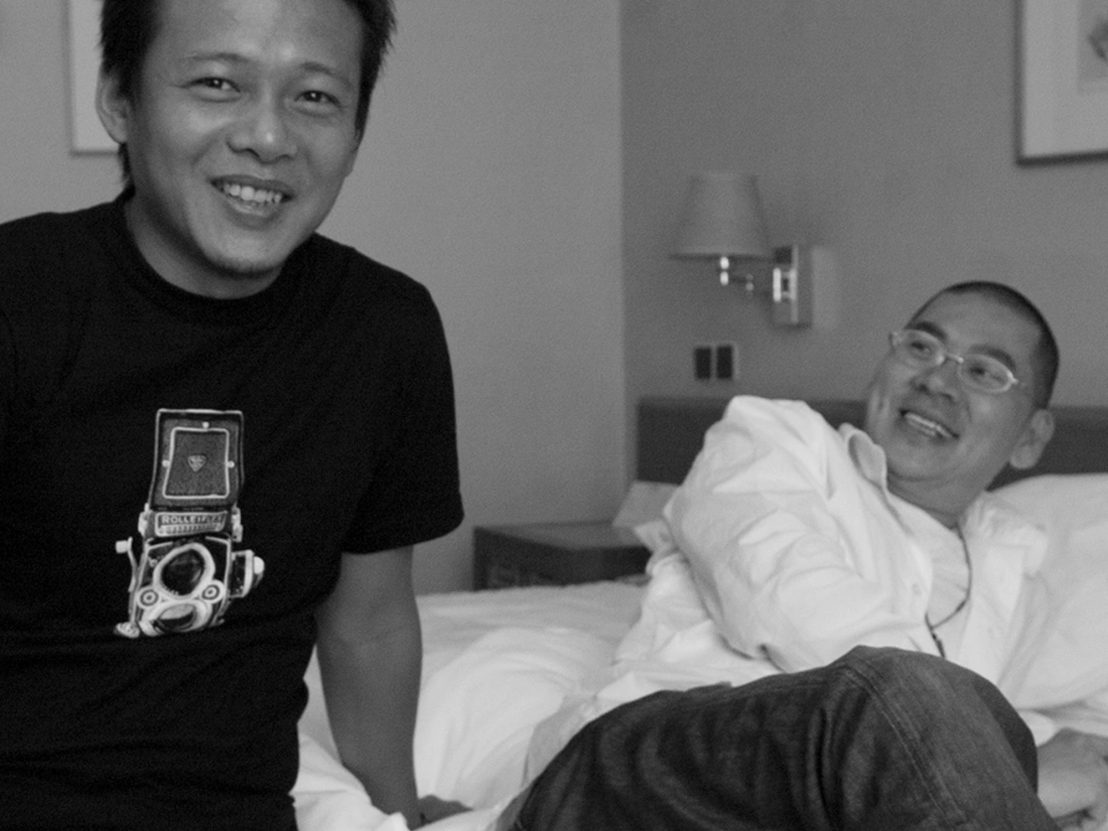 The Taiwanese master filmmaker and his muse discuss their long-standing artistic partnership.

It’s often the silence in the absence of vocalized emotion or explanation that speaks loudest in the works of Tsai-Ming Liang. The silence of the final loyal patrons appreciating one last movie in a dying theater in Goodbye, Dragon Inn, or the lust of two people in love for one another in Days. Through the lens of the camera and the endless emotions that can be read on the face of the best-in-career performances he routinely brings out of his actors, particularly his longtime collaborator Lee Kang-Sheng, actions speak louder than words.

So sitting down and hearing the director speak about his films and career in his own words with depth and detail is almost unusual. While the flashiness of Ginza can feel removed from the settings and content of many of the director’s work, Tsai Ming-Liang was in Tokyo and the luxurious office and shopping complex in the heart of the area to commemorate a retrospective of the Hong Kong director’s career. Ranging from his most beloved features to documentaries to rarely-screened short films, this was a vocal celebration for a man of few words.

And he was not alone. After all, could you really celebrate his feature film career without Lee Kang-Sheng, an actor who, having been scouted from the streets by Tsai Ming-Liang in the production of his TV film Boys, has collaborated and sat at the heart of every production the director has made since. The career of one is defined by the other, so any retrospective of one is also a retrospective of the other. Like two sides of the same coin, they were here in Tokyo, where he first made his mark on the international stage.

‘It was at the Tokyo International Film Festival where I was first discovered while I was still a rookie director,’ he explained, recalling the appearance of his first feature, Rebels of the Neon God, which won the Young Cinema Competition Bronze Award in 1993. Thanks to the award here Taiwanese cinema became more popular in the region and more of his later works would similarly make their bow at the event.

‘Before the debut of my first feature I’d been directing things like TV and plays. I’ve gained a lot of confidence in my work since then, but they aren’t commercial at all and aren’t easy to market, so I think the reason anyone ever saw my work back then and it was able to be seen by the world was because it won an award. I was grateful at the time, but I never thought at the time I would be getting special screenings like this.’

Part of the appeal of Tsai Ming-Liang’s work is his deliberate pace that observes its characters in and with silence. It’s an apparent feature of all his works as he lets his actors inhabit the space they exist in and live through it, rather than driving his characters along a set path where his settings become locations on a journey rather than a lived-in space. Still, it’s a style that only became more pronounced as the creator grew in confidence over the years and gained more experience, with his movies following the release of Goodbye, Dragon Inn in particular being notable for their relative silence.

For this film, the director’s love of cinema as an artistic medium and an outlet for creative expression influenced a style that has increasingly come to define his career and his work. ‘I love cinema and I love this medium, so I’m always thinking about how to take advantage of what this medium offers. When I make a film I’m usually thinking about how to for about one or two years before that, thinking about what the movie should be, what style and look it should have and will tell the best story, things like that. Not the business side of things.

‘For example, in Goodbye Dragon Inn the main character isn’t the people in the cinema but the theater itself, so I was very slow and pondering in order to express the space and unique nature of the cinema. It was that way of creating the film that brought it to the attention of so many within the film world. With the concept of the film the aim had been to create something about how art and ideas can come together in one place like this. My films are primarily driven by the image, as well, and this caused me to emphasize more on the depths found within each image, leading me to more freely try out new styles moving forwards.’

Beyond the depths of his images comes a single constant that remains through all of his films: his collaboration with Lee Kang-Sheng. Having discovered him on the street while he worked in an arcade, their mutual work together on Boys sparked an over-30 year collaboration that has seen him star in every film Ming-Liang has directed in subsequent years. ‘It felt like destiny meeting Lee Kang-Sheng,’ he admitted while talking about their relationship.

His meeting and the chances he had to observe the actor during the film of his early TV and feature works made him want to reflect his life and his own circumstances and tell stories that captured Lee’s inner monologue or gave space to portray himself most clearly on screen. 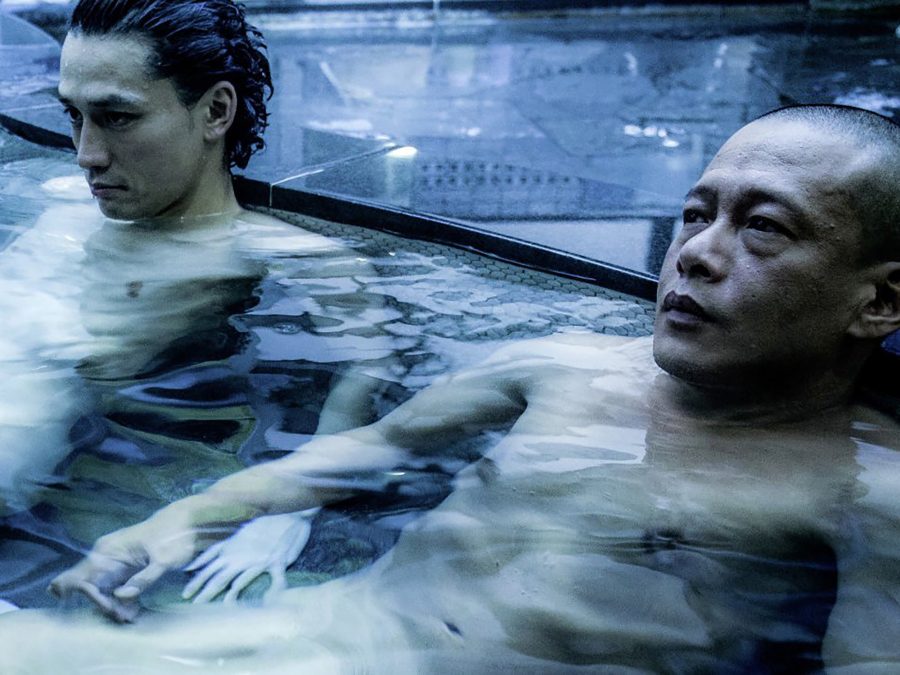 ‘[While working on my first work with him] I paid a lot of attention at the time to his home situation and the circumstances he was in. After creating my first picture with him he became ill, and that illness was incorporated into the film I was making at the time. With my fifth feature, What Time is it There, the film is about a young man whose father had died, and I wanted to write about those and his feelings surrounding that. I always want to capture how feelings change over time and to capture it in Lee’s face. That’s my purpose in making films.’

Perhaps it’s fitting that through the interview until that point and through a lot of Tsai Ming-Liang’s answers about his work that Lee Kang-Sheng himself had sat mostly silently, like an observer over the discussion of a career that the two together have shared. The desire to work together comes from a mutual respect of the other’s abilities and deep-rooted love for the medium and its history, and it’s what drives their dual performances behind and in front of the camera.

‘When movies first began they were silent, they had no lines, and I’m personally not someone who talks all that much either,’ pondered Lee. ‘I like isolation. People often ask me if I’m lonely, but I’m not, I like it. I’m not a fan of places with lots of people mingling around and making noise. Tsai Ming-liang is the same, and he also likes the isolation, and we both prefer these quieter places and movies.

As we’ve made pictures together we’ve had these shared experiences and views, we don’t really like music, and it’s why these movies rarely have any sound and are mostly silent. In Days, Non is from Laos, we don’t understand each other’s languages, but they’re so connected there’s no need to understand their conversation, so we made a more silent and intimate feature.’

It’s a mutual understanding of their shared worldviews and work together, and the way their careers have intertwined so closely, that leaves their partnership in films and the career of Tsai Ming-liang such a unique one within modern cinema. One career wouldn’t exist without the other, and the works which sprouted from their chance meeting and partnership would never have come to be.

‘If I hadn’t met Lee Kang-sheng, the movies I make would not be the same as they are now. I probably would have made a lot more normal movies with a lot of music and dialogue. The circumstances would have been so different. But I learned from Lee his way of life, his rhythm, which had a massive influence on me and led me to making more truthful films.’

For Tsai Ming-liang, his career is an observation of one actor, and the experiences and lives he has discovered and desired to write about through his own life and observing his friend and collaborator of three decades. When Lee was ill, they created a film where he was ill that the director admitted he feels brought out the actor’s best performance.

As the sun set in the heart of Ginza, a festival celebrated the career of a director with a named retrospective, yet the reality is a decades-long refrain celebrating arguably Asian and Taiwanese cinema’s strongest collaborative partnership. It’s a collaboration neither wish to end, and they stated their plans to continue working into the future. There’s more of this world to observe, after all. 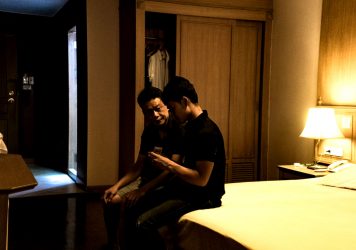 Taiwanese master Tsai Ming-liang returns with a profound, meditative poem on the human need for connection. 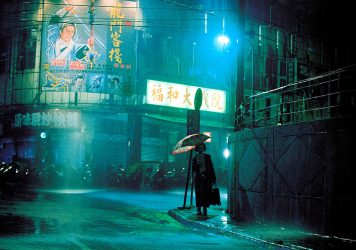 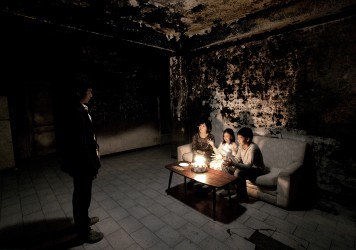