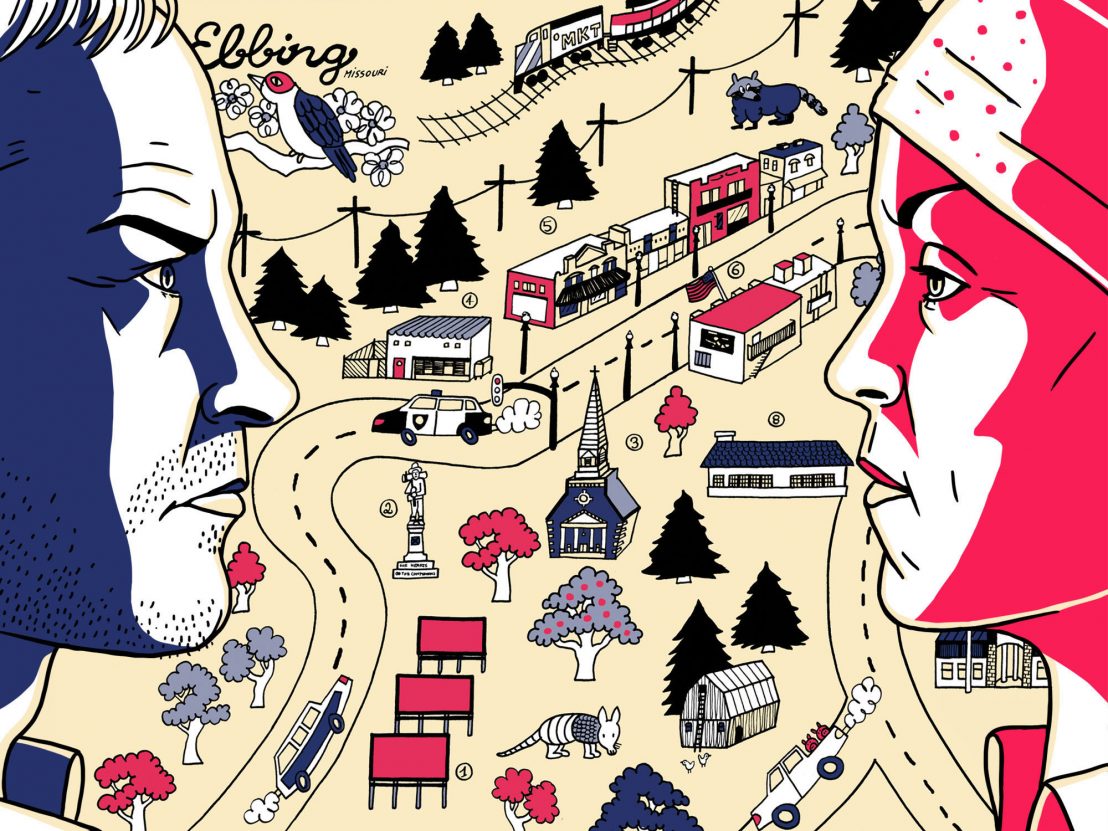 Think of the films of Martin McDonagh and the term ‘strong women’ probably doesn’t spring to mind. His third feature, Three Billboards Outside Ebbing, Missouri, could even be misconstrued as a box-ticking exercise, given that it arrives off the back of two decidedly male-centric movies, In Bruges and Seven Psychopaths, at a time when female narratives are in high demand. And yet complex, compelling heroines have been a fixture of McDonagh’s work from the very start – his debut play from 1996, ‘The Beauty Queen of Leenane’, centres on the destructive relationship between a depressive fortysomething and her manipulative elderly mother.

McDonagh wrote Three Billboards eight years ago, and always had Frances McDormand in mind for the lead role. She was hesitant at first, however, if only because she thought it unlikely that a blue-collar mom in her late fifties from southern Missouri would have teenage kids. Here’s the thing about Mildred Hayes though: she’s not like other people. As with McDormand herself, she does things a little differently, playing by her own rules and defying anyone with the gall to try and second guess her next move. That’s how McDonagh sees it, anyway, as LWLies found out when we spoke to him.

LWLies: This is the first female lead you’ve written in a while.

McDonagh: Yeah. There’s this perception that I only do ‘bloke’ movies, but I never felt that was fair. It just so happened that the first two movies I made were very guy-oriented. In fact, the script for Three Billboards was ready to go at the same time as Seven Psychos, but the ball was already rolling on that so we did that first. But it’s more than a strong female lead, I think. It feels like one of the strongest characters I’ve written, because it doesn’t follow any kind of stereotypical pattern of a female lead or a male lead. There’s something quite outrageously different about her.

Was there anything different about the way you approached writing this character?

Not really. You set her up as being very strong on the first page – the idea of putting those billboards up is such a strong action for a person anyway – and then you go, ‘Well, what kind of person would have done that?’ and it kind of starts writing itself. That force of will and that rage and that pain, they were there before I’d written the second page, or a line of dialogue. Once you’ve started with someone who is strong and provocative, every next scene they’re in becomes about how other people react to that. So, if a priest comes into the room, what’s that going to be like? Or if she goes to the dentist, what happens there? I really didn’t know what she was going to do from scene to scene. I didn’t plot anything out. I’m not sure if there really is a structure to the film. It feels like the characters just react to each other and that creates the next scene. It’s like a photo of something taken in between two violent events… perhaps.

And Frances… you wrote the script with her in mind?

Yeah. It had to be someone who was a number of things: an intelligent actor who wasn’t going to sentimentalise the part or make it Hollywood – because Fran’s never been that – but also she’s a working-class character and I didn’t want to patronise that. She’s a working-class woman from quite a working-class background, so it was very important to the two of us that we wouldn’t lay it on thick about that stuff.

What did Frances bring to the role?

It’s more about what she didn’t bring. Sentimentality is one of the first things that an actor will want to add. Like, having the scene and showing a tenderness out of a desire to be likeable. To show that maybe she’s not a hardass the whole time, that she’s a loving mother really and this is all about grief and pain. But we said that whatever happened in the year between the death of the daughter and when we meet Mildred – which we thought was probably depression, not getting out of bed, all the stuff that can come about as a result of intense grief – we wouldn’t touch on that because the story we wanted to tell is about the billboards and the anger and the war that she unleashes. It’s war without tenderness. We didn’t want to show the motherly side, we didn’t want her going to war each day and then when she’s back with her son it’s all lovey-dovey. I guess that’s part of what Fran brought to it – maybe Mildred always was a bit of a cow. She’s not necessarily a bad mother, but she’s a mother who fights, argues and is tough. But then maybe she wasn’t always this way…

When you understand where that toughness comes from, it’s almost out of necessity.

Exactly. And with Fran there’s an intelligence – just basic smart choices. The costume was all her idea. The bandana, the whole outfit, is like a uniform. She gets up, puts it on and goes to war every morning. And she never changes, even when she goes on a date. I thought that maybe it could be kind of sweet if it’s the one time she doesn’t wear it, but Fran said, ‘No, it’s war,’ and I’m glad she did because it’s kind of funny that way. Also, there’s a lot of humour in the script, but she never plays anything for laughs. She knows it’s funny and I know it’s funny, but there’s never a wink to the audience. Everything she does is deadpan. I think some of the other characters are a bit more on the funny side, but nothing about her plays up to the comedy. The most important thing between us was to always remember what happened to the daughter, and even in the edit I had to remember it was a film about that rather than a quirky black comedy. Weirdly, the laughs almost work better that way because they’re born out of such honesty and tragedy.

Some of the encounters she has with the townsfolk are great. How comfortable was Frances with some of those scenes?

She loved kicking those kids! She couldn’t get enough of it. I think a lot of the joy of it for Fran was being able to do something that actresses just aren’t allowed to do. In terms of kicking children, getting to do a one-page speech taking apart a priest, and, you know, the dentist thing, she was very joyful on those days I think. With the kids especially. The stunt guys put rubberised pads on the actors, but it’s still getting quite close to the old dodgy areas – but she never held back.

There are some real emotional moments too. How much do you need to direct an actor like Frances in those moments?

It’s all on the page in terms of dialogue, but the deer scene, for instance, or the scene on the phone near the end, were the moments where I felt she’s allowed to be more emotional than anywhere else in the film. I thought there could even be tears in those scenes, but Fran was quite adamant that even at those points she couldn’t, or wouldn’t break down. At the time I was thinking that I’d rather have both options, but she was pretty determined that tears weren’t part of it. In retrospect I think it’s perfect the way it is.

It’s in the eyes…

Was there ever any conflict between you?

We did go back and forth a little bit. I like sticking completely to the script, and she would do that but she would sometimes want to cut lines or cut words, and I’m against that.

Who won the majority of those battles?

I would say I did, she would say she did. I think we were about a week in – it might have been the deer scene actually – where I just thought, ‘She’s so good’. There’s no need to fight about five per cent of the script when someone’s talent is so self-evident. But there was also a mutual respect there which I think came from our shared theatre background. I avoid working with cunts anyway. Of course, you do your research into people or you meet them and you kind of know. I know the people to avoid. But then there are certain actors who come with a reputation of being tough, and that can mean anything. It can mean just paying attention to the details. I worried that Ralph Fiennes might have been a bit tough to work with, and he wasn’t, he was just really, really specific, almost method about the character. And I love that stuff. I’d rather someone say, ‘No, I’m not walking down the street unless I’ve got a passport in my pocket because I’ve just come off the plane.’ That’s brilliant, that’s what you want in an actor.

It’s different for men and women. It will be easier for someone like Colin Farrell to find roles in his late fifties.

Exactly, which is an issue with the film business of course. You would hope, though, that with something like this you can break the door open a little bit. Obviously these things are dependent on making money, but if this made money with a 60-year-old woman in the lead you’d hope it could become a template for others to follow. But there’s no point in breaking down boundaries – feminist ones or gay ones or persons-of-colour ones – unless the films are good. The great thing about Moonlight wasn’t that it was an all-black cast, or the gay side of it, but that it was a brilliant film. That’s what’s got to happen, I think. There’s no point in us all being able to make shit films.

On the money point, if you’ve got a script with a 60-year-old female lead, is that an instant turn-off for certain financiers?

Yeah, well, unless you stick Julia Roberts in it. Hollywood loves ‘starry’ stars. That’s what ticks the financial box. I’d be happy to not make films if I’m not going to get to make them the way I want to. It’s fine, I’ll slink back to the theatre. I’ve never had money people let me do exactly what I wanted to do, and this time we did. Not a note, not even a set visit. It was insane. I’d heard that Fox especially had been quite interfering in the past, but the people who are running it now are completely easygoing. I guess it’s a bit easier for me now because they have the script, but they also have the evidence of In Bruges. So if they’re smart they’ll trust that it’ll come out okay. Sometimes things don’t come out okay, even though you try to make them that way. Seven Psychos is probably that way. I’m glad that this one followed a different route. 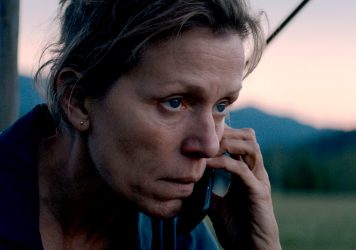