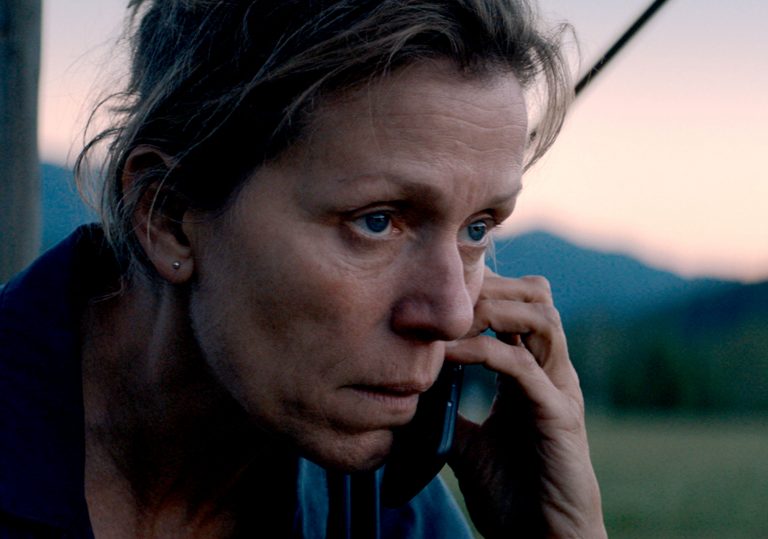 McDonaugh’s previous film, Seven Psychopaths, was a volatile hoot, but was unloved by many.

The rumours are true – this an absolute joy.

Give all the awards to McDormand, and then invent a bunch of new ones for her too.

Try to define grief and you’ll likely end up tongue tied and trounced. Just as that big, unfinishable Sudoku brainteaser we call mortality is something you’ll never quite master, grief too can be a bitch to unpack and understand. It can give rise to ideas and schemes that defy all sensible rationale. Mildred Hayes is hurting hard as a result of the premature death of her daughter Angela. Let’s not beat around the bush: it was bloody murder, the kind that any mother worth her salt can not and will not forget in a hurry.

We meet Mildred at a moment of divine inner revelation, when her grief takes on a darker, more corrosively acidic form. As played by the great Frances McDormand (who is even greater than that informal prefix may have prepared us for), Mildred is a wadded mass of contradictions who is magnetised towards a course of violent direct action. The first time we see her face up close, in the midst of a single second she rides the gamut of emotions from workaday desperation, momentary disorientation and, finally, angry gratification.

And these emotions aren’t projected through painted, well-worked expressions, but entirely in the eyes and the most minute-but-meaningful lived-in facial contortions. At this point in her life, God is no friend of Mildred Hayes, but through this moment of sublime clarity, one she experiences while driving her puttering, wood-panelled family saloon down an unused byway, she still believes there might just be somebody up there keeping the lights on.

As much as it looks like it on the surface, Martin McDonagh’s third feature, Three Billboards Outside Ebbing, Missouri, is no simple revenge yarn. The film is about a woman who decides to light a rework up the ass of a man she feels has done her wrong, yet in truth, it’s less about retribution and more about why we do it. What does it take to tip a person over the edge to potentially sabotage their own wellbeing for the sake of some destructive greater cause?

In that moment, Mildred makes a decision, and she knows that to carry it out would involve ignoring a set of wider consequences. She knows that people will be offended by her brash actions. She knows that it will unlikely have the desired effect. She knows that she will no longer be a figure of pity, but of hatred and derision. She will drive her family and friends away, all for the cause. But, hey, what the hell, right?

Per the title, Mildred decides, on what appears to be a whim, to resurrect three musty advertising billboards sat out in the boonies of the hokey fictional burg of Ebbing, Missouri. With chunky black type on a blood red background – much like the title cards of some French movie from the 1990s promising hard sexual violence – she poses a question about her dead daughter. The police report from seven months back claimed she was “raped while dying”, and such being the case, why hasn’t Chief Willoughby (Woody Harrelson, in “career best” mode) gotten off his rumpled keister to catch the killer? It’s a poser that festers in the minds of the polite townsfolk, but Mildred decides to splay it onto the landscape as both a monument to her fallen kin and a battle cry against those who refuse to dedicate every waking second to the pursuit of justice.

What’s great about this film is it’s absolutely nothing like you expect it to be. The early trailers give very little away, hinting at a broad comic tone but delicately swerving the philosophical meat of the matter. McDonagh’s writing toys with archetypes but sends everything and everyone in the wrong direction. Mildred is painted as a female avenger, physically styled after the famous ‘We Can Do It!’ American wartime propaganda poster that was latterly co-opted as an icon of modern, can-do feminism. Yet she is no mere emblem, and her reasoning, while often extremely entertaining, often overlooks the deeper nuances of human compassion. She’s still canny enough not to bring a knife to a gunfight, trading body blows – literal and figurative – with anyone prepared to step up. But she’s developed a way of working out how to hit people in the places where it really hurts. 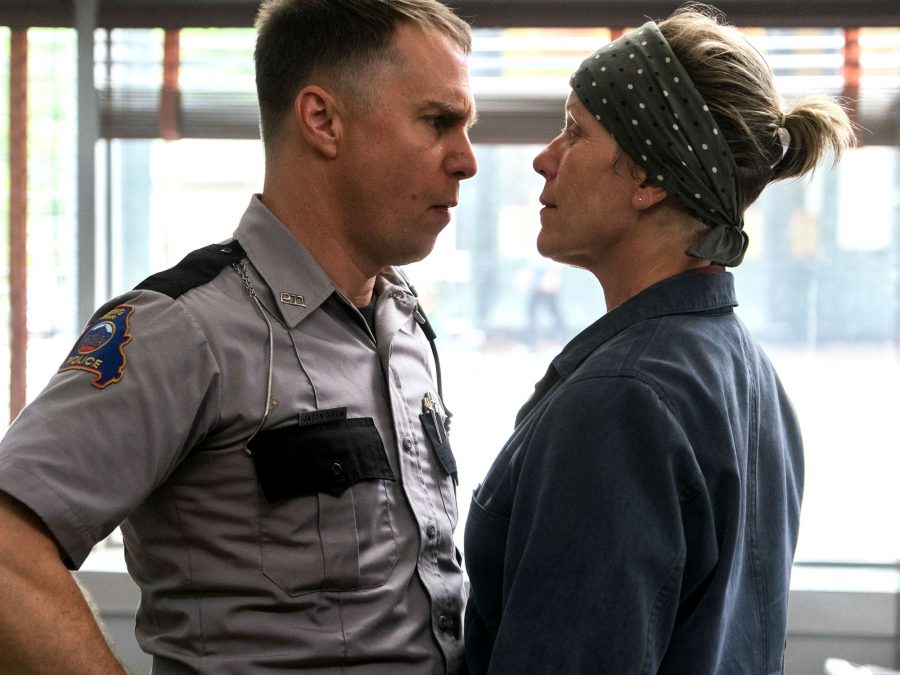 In the mix, too, is Willoughby’s mamma’s boy protégé Officer Jason Dixon (Sam Rockwell), who the local constabulary paint as an essentially “good man” despite his predilection for torturing black suspects. His defence is that he’s happy to torture folks of all creeds and colours. He’s certainly wild, but he doesn’t appear to take any joy in busting the skulls of irritant locals. While sat at his desk, usually shotgunning cookies and flipping through the funny pages, he can see one rat bastard up through the window – young Red (Caleb Landry Jones), snap-talking honcho of the Ebbing Advertising Company whose willingness to play by the rules of capitalism also enables Mildred’s public tirade. Rockwell’s immaculately judged tragicomic turn brings together self-determination and self-loathing. One moment he’s receiving an orgasmic thrill from the freedom afforded to him by a badge and a gun, the next he’s a broken man, fully aware of his unstable present and grim future.

The script lashes down twist after twist, but McDonagh’s structuring finesse means that it never feels as if he’s just switching things up for the sake of it. In Three Billboards, plot twists are equated with the mysteries of human impulse, accounting for the fact that a person’s life can change in an instant and it doesn’t have to feel like a clever-clever writer casually nudging chess pieces around a board. The film works because McDonagh never judges his characters or their motives. He never hints at who’s right and who’s wrong. Indeed, the very idea of there being a binary solution to any social situation is sheer madness.

In this sense, the film feels like a drolly amusing riff on David Fincher’s 2007 classic, Zodiac, itself about the folly of searching for finite truth. It also brings to mind a Coen brothers movie, but maybe not the one you’re thinking. Mildred bears little in resemblance to Fargo’s happy-go-lucky cop, Marge Gunderson, in 1997’s Fargo, but the film does recall works like Miller’s Crossing or The Man Who Wasn’t There – both head-spinning narrative contraptions built on a deep foundation of melancholy.

It’s a story that’s jerry-rigged to perfection, but it never feels contrived or overly desperate to make a single big statement. Mildred’s billboards act as a totem for a lost daughter and a quest with no discernible end point. The tone skirts between splenetic farce and a deeply soulful lament to the pains of memory. The dialogue is tart and tasty, but McDonagh refused to allow things to stray too far into the realms of the theatrical. Though the orbiting players are vital cogs in this ruthlessly efficient machine, McDormand is the crude oil that keeps things purring.

It’s something of a cliché to even say it, but she has the ability to make you laugh and to make you cry. She makes you love Mildred and makes you loathe her too. She makes you understand her and disapprove of her. There is nothing easy in this life, and there are no answers to be had, so at the end of the day, you’ve just got to make your move and be done with it. She embodies the idea that a flawed human can still be deserving of love.

McDonaugh’s previous film, Seven Psychopaths, was a volatile hoot, but was unloved by many.

The rumours are true – this an absolute joy.

Give all the awards to McDormand, and then invent a bunch of new ones for her too.