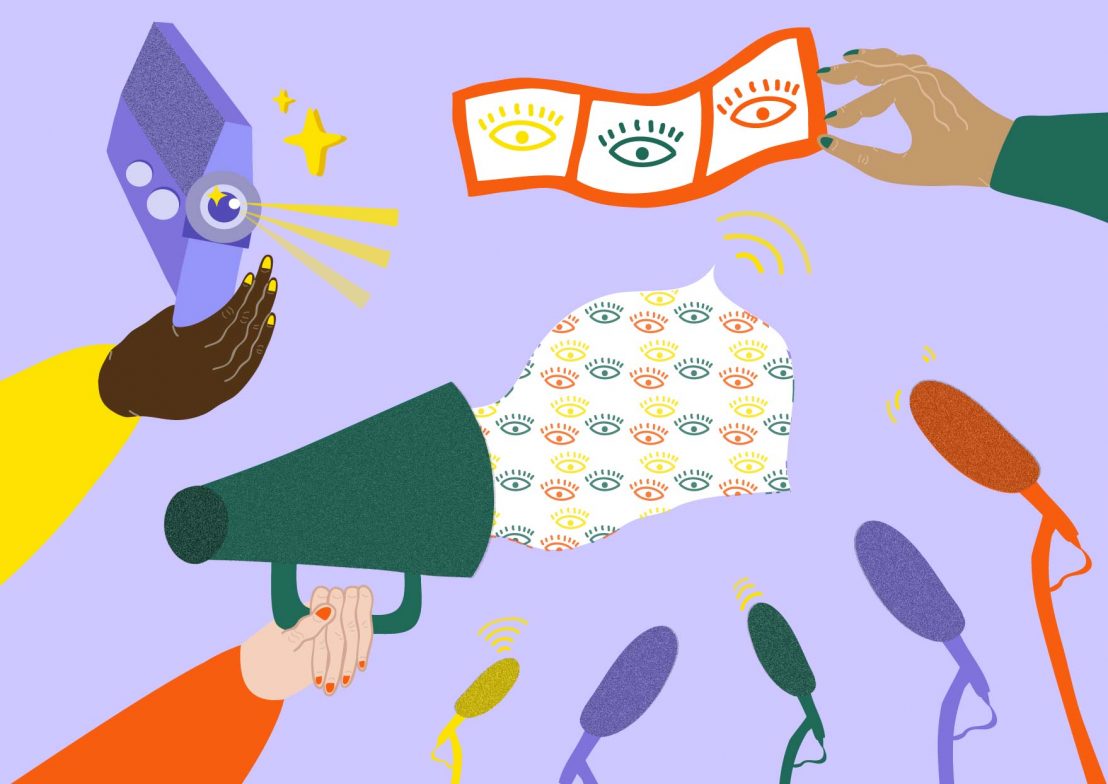 At times it can feel like the film industry is a never-ending corridor of locked doors. You can rattle the knobs all you like in the vain hope that someone will relent and let you in – but sometimes you’ve just got to kick the door down. To celebrate International Women’s Day, we asked five women across the film industry to share their personal journeys, as proof that there are more ways in than you might think.

Natasha is a cinematographer. Her work includes The Rover, The Neon Demon and Honey Boy.

“When I was 10 I was a dancer and a gymnast. My dad had this Super 8 camera that he would use to film our birthdays and holidays, and I had this idea to film myself and my sister dancing in different styles. First we had to choose the styles and create the choreographies, but then I realised I had to have a good wardrobe, and good sets. So my grandmother became the costume designer, my sister and I the production designers, my dad was the cinematographer and my mum held one of those handheld special lights, blinding us with front light to get the film exposed correctly.

“I probably didn’t realise back then that I was the producer, writer, choreographer, director and main dancer of my six-minute musical. Two rolls of film that had to be played at the same time as the accompanying cassette where I recorded the soundtrack. I practically did everything except cinematography! But I definitely got the film virus back then.”

Corrina is the founder of Bechdel Test Fest, and also works in film marketing, programming and criticism.

“As a young buck entertainment journalist, I would get invites to the most random things. Lipstick launches, kitchenware parties to restaurant openings. I would accept the invites because what the hell – I got fed, tipsy and I could usually bring along my best mate who by now was toying with the idea of writing a book called ‘The Diary of a Plus One’. When the chance to go to the Flatpack Film Festival arrived I was lured by the trip to Birmingham over the films and accepted it as another adventure. I’d never been to a film festival and my understanding went as far as Cannes. Birmingham was not quite the south of France but for a girl more used to mouldy tents than Travelodges I was spoilt.

“I was told to come and meet Alice Lowe for a screening of Sightseers. I happily went along and consequently found a new love of old cinemas, independent film and an inspiration in Lowe. Sightseers revealed what independent film truly was. It was completely different in tone and narrative and I’d never seen a woman in such a deliciously disgusting role. After an engrossing Q&A – something else I’d never seen – I left invigorated and thirsty for more experiences like this.

“That afternoon I saw a bunch of experimental shorts in a cafe moonlighting as a cinema, Joan Of Arcin a candlelit church and had a little dance in The Custard Factory. I loved how the whole city laid out its carpet to embrace independent film and its fans; anything and everything went when it came to the program, and everyone belonged. I left wanting to create more events like this; to champion films that were off the grid of commercialism and out of the park of the multiplexes.

“I later founded Bechdel Test Fest, championing positive roles for women on film and five years on am running it with some seriously awesome women. For the day job, I help open new cinemas across the UK for Picturehouse Cinemas and work with an incredible team of passionate people bringing Sundance Film Festival to London. I also do the odd bit of film writing and podcasting and am all about that panel life. It’s exhausting but rewarding and until something beats standing at the back of a sold out screen waiting for the credits to go up on an excellent indie film, I’ll be here for the long run.”

Jennifer is a film director. She made her debut in 2016 with The Babadook, and her second feature, The Nightingale, will be released later this year.

“It took forever for me to get here, and that’s important for people to realise. Some people think, ‘I’ve worked on this for a year, why hasn’t it happened?’ But it takes a long time – you commit your whole life to filmmaking. I remember as an actress being very disillusioned with the work that I was handed, and I thought, ‘Am I going to spend my whole life doing this?’

“As a child, I’d written and directed plays and stories, but I lived in an era when as a child and as a teenager, I didn’t think I could direct films. I didn’t even know that was possible. So through my frustrations with being an actress, I decided I was gonna make films. My own films. And it took me a long time, but I’m so happy I persisted.”

Catherine is the head of Channel 4’s Random Acts, and a co-founder of Loop. She is also a film journalist and a board member of Tyneside Cinema and Wysing Arts Centre.

“I always think of myself as a work-in-progress, so there was never one moment where I thought, ‘Film: it’s what I must do,’ or, ‘Hey, I’ve made it in the film industry!’ And I actually have a suspicion that it may be more satisfying to think that way; it hopefully means you’re rarely pining for some future ideal or worrying about having imposter syndrome because you think you don’t deserve to be here yet (not to say that I never feel insecure about a project or fantasise about the journey to come!).

“I’m guided primarily by curiosity, cinema is an excellent conduit for that, and also by a fair degree of pragmatism about what works for who I am, more so than focussing overly on external cues like what my peers are doing or what’s ‘normal’ – that stuff is pretty irrelevant. ‘What’ is never very interesting compared to ‘how’. I do have a problem with saying yes to too much because everything sounds interesting and then not having enough time for everything!

“If you’re trying to make your way into the industry, you should exploit people like that – ask them for a coffee or a chat and they will often feel obligated to help, even when they really should be writing that article outline/proof-reading someone’s pitch they agreed to help with/thinking about talking points for a podcast next week. You can take advantage of these people’s urge to procrastinate.”

Marie is a freelance film producer. She most recently served as Unite Production Coordinator on Alex Ross Perry’s Her Smell.

“I went to school at NYU, and I never felt confident enough to make my own work there. Instead of directing, I ended up producing shorts for my boyfriends. That sort of ‘producing’ basically boiled down to ordering meals and handing out band-aids. It wasn’t until I ended up as a producer in the advertising industry that I learned that producing wasn’t just being an on-set caretaker.

“I had this wonderful mentor named Sherri Levy, who showed me that being a producer meant demanding a seat at the table, and earning it by being a terrific problem solver and coming to a project with creative ideas. Filmmaking is such a collaborative medium that it demands the producer not be a shrinking violet.

“It’s still a process for me, to force myself to be more assertive and less reactive – to thinking of myself as working with the crew, not for the crew, and I think that feeling comes from a gendered confidence gap. But with each project, my voice gets a little louder and my place within the industry a little more concrete.”