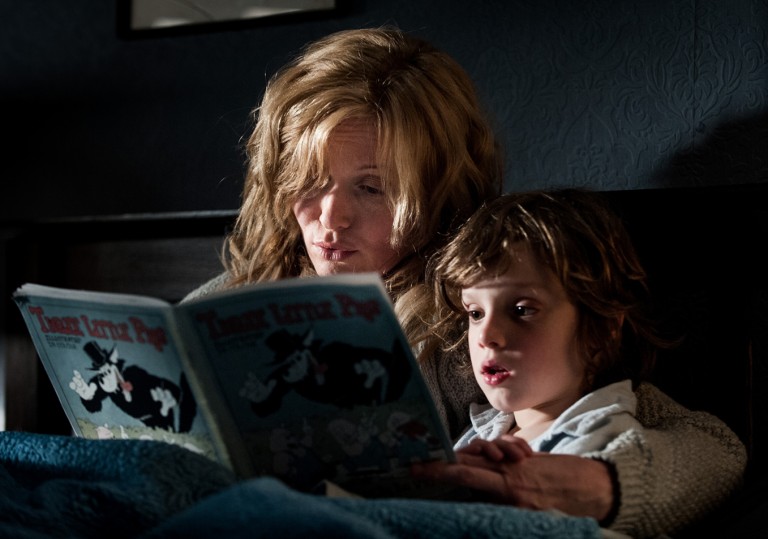 Eerie and unsettling, this is a promising debut from an exciting new talent.

A Nightmare on Ramsey Street.

As you might expect from something so firmly ensconced in the trappings of horror, The Babadook is riven with grief. Amelia (Essie Davies, in a fiery, transformative performance) is a single parent coming to terms with the death of her husband Oskar following a tragic car accident. She blames herself, having been at Oskar’s side at the time, en route to the local hospital in order to give birth to their son, Samuel.

When the film picks up their story, Samuel is six years old and a bit of a miscreant. An amateur conjuror, he warns his agnostic mother about a sinister and demonic manifestation that haunts his dreams and skulks around in the shadows. Meanwhile, a disturbing pop-up book called Mister Babadook has mysteriously taken residence on the shelf in Samuel’s bedroom, foreshadowing terrifying events that will change both of their lives forever.

The eponymous monster at the heart of director Jennifer Kent’s effective and ultimately profound creature feature is no wee, timorous beastie; it’s a pristine and unnatural presence that lives in the walls, hides in the basement and lingers in the darkest recess of a vast wooden closet. Nothing is safe from this ghastly boggart, not even the dog. At least, that’s what this talented new Australian writer/director would have us believe. Frankly, Kent’s distinctly creepy debut is a little too interested in the duplicity and trickery of magicians to be taken entirely at face value.

Ambiguity fuels the terror, and The Babadook is all the better — and scarier — for it. How admirable for a movie like this to completely sidestep easy answers and tidy resolutions. Effective, too. Kent’s grim fandango takes its cues not from more recent (and banal) Western chillers like The Conjuring or the dry ice pageant Insidious, but from the nostalgic primalism of directors like Hideo Nakata and Takashi Shimizu. The film eschews pedestrian shocks in favour of slow-burn dread before finally cranking everything up for a witty and unexpected finale.

Eerie and unsettling, this is a promising debut from an exciting new talent.

A Nightmare on Ramsey Street.