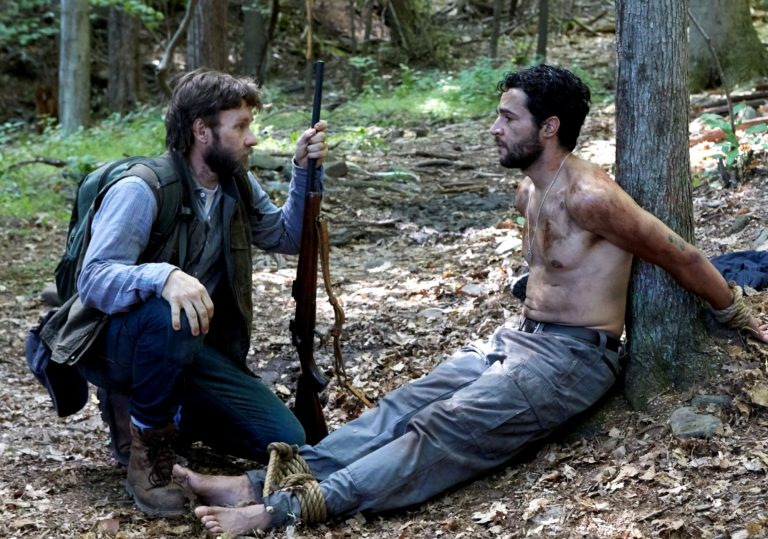 A genuinely terrifying trailer, with striking visuals and a promising cast.

Scared, then anxious and confused as to why this is not completely working.

Rather disappointing in the end, but Shults delivers a few memorable scares.

The most striking aspect of It Comes at Night, director Trey Edward Shults’ second feature, is how it seeks to avoid generic convention and cliché. While retaining the narrative skeleton of a traditional contagion horror with a whiff of the survivalist thriller, the film departs from its generic roots by keeping the nature of the illness, its means of infection and its origin unknown to the viewer. Although they live in a secluded house in the middle of a forest, the characters definitely know more than we do – in a departure from broad horror convention, it is with our ignorance the film toys with, not the characters’.

The film opens with Paul (Joel Edgerton), the austere patriarch of the family, executing a man covered with pustules before setting fire to the body. The contaminated person, we discover, was the father to his wife Sarah (Carmen Ejogo) and grandfather to his son Travis (Kelvin Harrison Jr), a tall and skinny boy in his teens. This blunt, horrific opening immediately inspires dread, hinting at the horrible things these characters must have witnessed in order to be able to kill a loved relative with such ease.

The sequence is purposefully alienating. Thrown into this unknown situation, the violence is stunning. This level of dread becomes a constant throughout a film which boasts with a supremely unsettling visual style, all oppressive tracking shots and oddly still camera pans. The clinical, cold look at a homely rural environment gives the strong impression that, contrary to appearances, no one here is safe.

Making the familiar seem unfamiliar already hints at the idea that, although no one inside the house is ill, something there is already broken. Constantly scared and always aware of the proximity of death, the residents have lost all sense of familiarity with their surroundings and the people around them. Worst off is Travis, who is barely aware of what is going on, escaping into dreams at night and more concerned about his dog than he is about his own safety. He is the main character, and it is undeniably his fear and confusion that the audience experiences throughout the film.

Yet what drives the story forward is Paul, who fights this apathy by holding on to the notion of family. His obsession becomes a central theme of the film after the family meets Will (Christopher Abbott), a man who breaks into their house looking for food for his wife (Riley Keough) and young son. The two families move in together, sharing supplies and company, but the alliance proves fragile as Paul’s paranoia and concern with keeping his own loved ones safe threaten to descend into violence at any moment.

This is all terribly sad, even more so considering Travis is only collateral damage, embarked into this rivalry against his will. But something is off. The sadness and terror that the film wants us to feel simply aren’t there. We can only watch and admire the ideas and visual invention on display, sympathising with the characters without ever truly feeling their pain.

It would be easy to say that this impossibility to relate is intentional, since we are meant to identify with the alienated Travis. But the film would probably not devote this much screen time to close ups on facial expressions if it did not want us to empathise with the characters to some degree. Unfortunately this observational, ‘realistic’ visual style is not a shortcut to character building.

On the contrary – having characters’ interiority shown at a surface level, through close-ups but also via abrupt, rather unnatural and jarring speechifying from the characters themselves, makes them appear unrealistically one-sided and overdetermined. These characters are completely limited to what we see and what they say. As in soap operas, we can sympathise with their emotions and troubles, but their overtness makes it hard to buy them as real people.

This demonstrative style is all the more confusing for the way it contrasts with the unexplained dread that the film goes to great lengths to create. All throughout the story, this gripping fear within every single image carries the promise that something horrible – something more – is lurking around every corner and will perhaps come out at the end in a big reveal. But it never does, and the film falls short.

Because the expertly crafted atmosphere is not backed up by story or narrative development, the film ultimately feels more like an exercise in (very good) style than a fully realised film. Laudable story and themes are enunciated as marks of intent, rather than truly felt and explored. As such, watching It Comes at Night often feels less like experiencing a film than it does observing a director construct one.

A genuinely terrifying trailer, with striking visuals and a promising cast.

Scared, then anxious and confused as to why this is not completely working.

Rather disappointing in the end, but Shults delivers a few memorable scares.