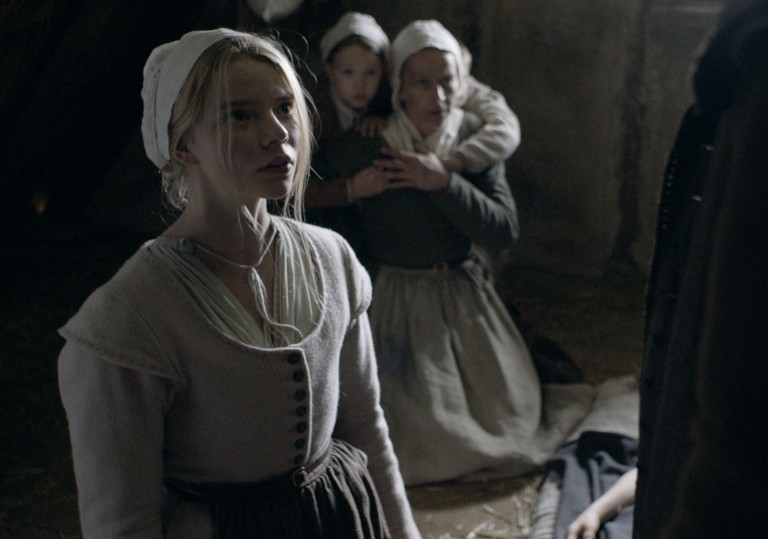 The great outdoors and the composition of human faces are both wrought with crisp definition in Robert Eggers’ sumptuous debut, The Witch, which is being mis-sold as a horror film. God-fearing families, 17th century lifestyles, folkloric mystery and hauntingly grotesque tableaux are the ingredients with which Eggers plays.

They are part of the iconography of horror, and the images scour themselves onto your brain thanks to their disturbing brilliance. But, simply put, there are no scares in this movie. Characters in horror films usually begin carefree and are gradually ambushed by fear. In The Witch fear defines the characters from the first frame, so there is no escalating tension or increased stakes. This is a dark mood piece that is made outstanding by rigorous recreation of period dialogue, eerie settings and captivating performances.

William (Ralph Ineson) causes his family to be exiled from their New England community as punishment for his wayward religious preaching. Ineson’s voice is so low and rumbling that he sounds like an angry god, and even has a little of a Jesus-y look: long tawny brown hair and a noble moustache, albeit a sharper nose and more sunken features than Our Lord and Saviour. He is set up as an imposing patriarch only for his power to swiftly leak away and the space filled to capacity with supernatural confusion.

As soon as his family sets up camp in a chilly forest glade, their newborn baby disappears. William’s wife, Katherine (Kate Dickie), is wracked with grief. Dickie’s face is the craggy match for her husband’s, whereas their children are milky of face and rosy of cheek. The eldest, Thomasin (Anya Taylor-Joy) is on the cusp of womanhood. The beginnings of a bust blossom under her pious dress, tendrils of white-blonde hair which hang loose from her head scarf.

She is closest in age to Caleb (the fabulously named Harvey Scrimshaw). Freckles blaze across his perfect skin. Despite his youth, he has the heavy burdens of an adult male on his small shoulders. The isolated setting and duties of living off the land mean that there is no time for larking, although the mischief-loving, gap-toothed twins Mercy (Ellie Grainger) and Jonas (Lucas Dawson) find a way to run amok with the family’s goat, Black Phillip.

While there is an external ‘evil’ made explicit early on, The Witch is primarily a portrait of a family destroying itself from within. It doesn’t take much – the merest casual suggestion – for the adults to begin shrieking puritanical condemnation at their offspring. Accusing a sibling of being a witch initially seems like 17th century domestic banter (“Are you witches?”, “Does father think I am?”, “Are you?!”) but parental reactions are so deadly serious that any humour perceived by an audience is apart from a story peopled by family members too scared of life to be able to love one another.

The precise, old-world dialogue lends an air of formality, which suits a setting that resembles a Grimm fairy tale. The colour palette is specific and rich: forest green, bleached corn yellow, the brown and cream uniform that all characters wear. When blood tarnishes these hues, it’s a statement as informed by images as it is ideas.