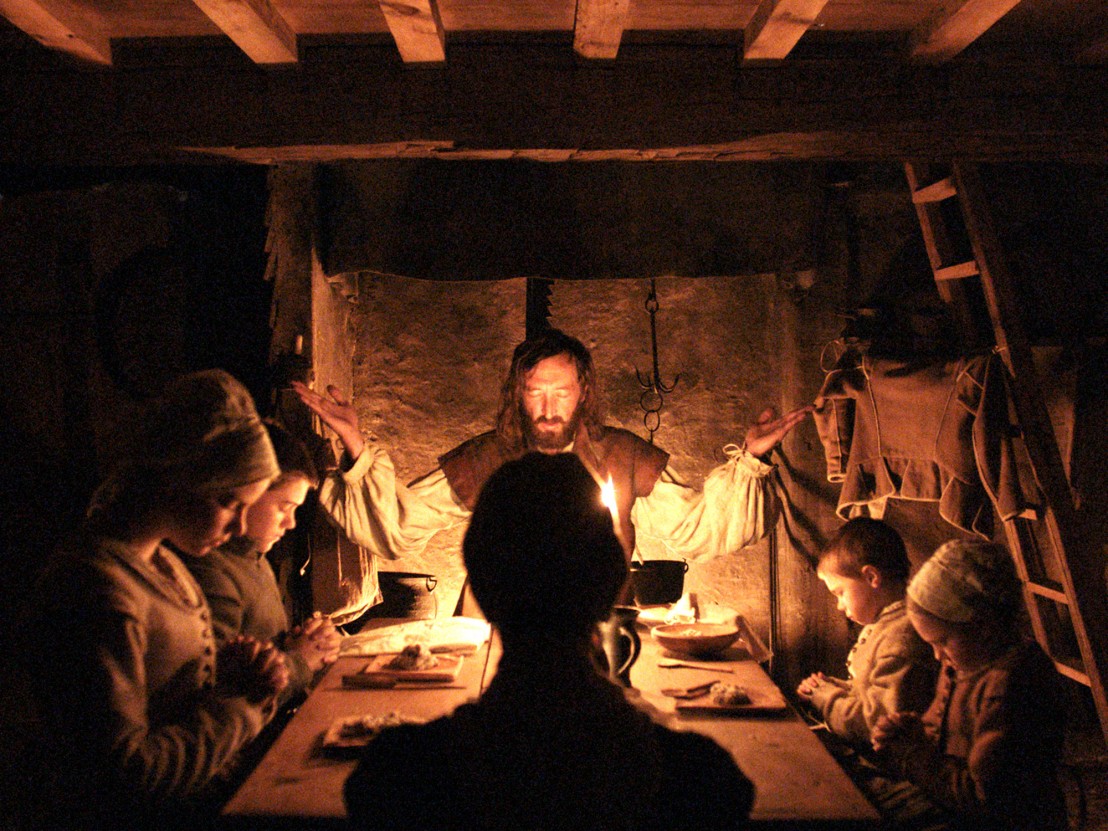 Robert Eggers’ ‘New England folktale’ and confirmed horror movie sensation, The Witch, has earned reams of press on the strength of the authentic feel behind its Puritan freakout, so it’s quite surprising that – to this writer’s knowledge – no reviewer has yet pointed out that the film begins with a Biblical paraphrase: “What went we out into this wilderness to find?” (A couple of explicitly Christian perspectives on the film have at least registered the line.)

In school, at least in America, we’re taught just enough about the Puritans to appreciate the allegory of ‘Young Goodman Brown’ or ‘The Crucible’; likewise The Witch’s subtext is more intelligible to us than the religion-soaked text itself. Reviews have gestured to the atmosphere of fear and trembling before God, or, more up-to-date, the culture of patriarchy and suspicion – and though these are important interpretations that the film absolutely invites, what’s exceptional about the film is that such readings follow naturally from a vividly 17th century mentality which has not been reverse-engineered to fit a modern meaning. So much of what’s already been written about The Witch has nodded towards this by focusing on Eggers’ exhaustive research. But just how deep does Puritan belief run in the film?

Eggers has told several interviewers that the kernel of the film was his childhood obsession with the 1692 Salem witch trials, and that his research materials included accounts of demonic possession written by clergymen Samuel Willard and the infamous Cotton Mather – which, if granted their threescore years and 10, only the youngest members of The Witch’s family would live to read.

It’s not nitpicking to point out that this 1630-set “folktale” conflates the trials endured by the first generation of New Englanders, born Elizabethans, with the trials conducted by their children and grandchildren – or that the film’s timeline conflates the Plymouth and Massachusetts Bay Colonies. Decades and miles mean a lot given the rural isolation and doctrinal schisms of 17th century New England, and Eggers seems to know this as well as anyone. Another thing that’s come up a lot is the rough poetry of The Witch’s dialogue, and the sophisticated sentences with which a mostly illiterate family addresses each other; it’s explained that early drafts of the script relied heavily on direct quotations from primary sources, and that Eggers read the Bible in its entirety – the 1560 Geneva Bible, not the 1611 translation commissioned by King James I, whose archbishops drove the Plymouth Pilgrims out of England.

Sectarianism isn’t incidental to The Witch – it’s the whole point. Aboard the Arbella en route to establishing the Massachusetts Bay Colony in 1630, John Winthrop, part of the wave of East Anglians heading west in the Great Migration, delivered the lay sermon “A Model of Christian Charity,” with its climactic invocation of the Sermon on the Mount:

The Lord will be our God, and delight to dwell among us, as His own people, and will command a blessing upon us in all our ways, so that we shall see much more of His wisdom, power, goodness and truth, than formerly we have been acquainted with. We shall find that the God of Israel is among us, when ten of us shall be able to resist a thousand of our enemies; when He shall make us a praise and glory that men shall say of succeeding plantations, “may the Lord make it like that of New England.” For we must consider that we shall be as a city upon a hill. The eyes of all people are upon us. So that if we shall deal falsely with our God in this work we have undertaken, and so cause Him to withdraw His present help from us, we shall be made a story and a by-word through the world.

The “city on a hill” – long a favourite image of American presidents from across the political spectrum – was meant to suggest this New World as a model for the Reform, along Protestant lines, of the Old one. As the late American scholar Perry Miller wrote, “That purification for which Cavinists on the Continent and Puritans in England had striven for three generations was to be wrought in a twinkling upon virgin soil.”

It was for this reason that, in John Winthrop’s later words, “The Lord hath brought us hither through the swelling seas” – another echo of the opening of The Witch, which continues with head of the family William (Ralph Ineson) questioning his elders: “Leaving our country, kindred, our fathers’ houses, we travailed a vast ocean. For what?”

For what? The Puritans believed in a Calvinist “covenant of grace” between man and God. The infallible Lord will hold up His end; what was required of the Puritans for their salvation was belief. “If thou hast but a thirsty soule,” said the Derby-born John Cotton (Cotton Mather’s grandfather), “and longest for grace under sense of thine owne droughtiness, then God will not deny the holy Ghost to them that aske him.” That thirst, which hones the yearning for God to an edge of desperation, cuts through The Witch. The film’s characters, like all Puritans, are constantly anxious lest they worship falsely. “Surely if ever a theology tortured its votaries,” Perry Miller wrote, “it was that taught by New England divines, and if ever mortal was driven to distraction it was the mother who, as Winthrop tells, drowned her child that it might escape damnation.”

He further explains: “The one sure certification of true faith was to be made from an examination of what the soul desired: whether it craved holiness for holiness’ sake or merely for the release from pain. […] Only a sinner despairs.” It is in this way that The Witch’s William is ultimately weak. His exhaustion is both spiritual (“I was born in corruption”) and, given his and his family’s near starvation, physical; indeed, the constant physical and emotional toil of life in an uncivilised place seemed to parallel for the Puritans the constant reflection, self-doubt and self-scrutiny required by their covenant.

“The wilderness of New England was not just an opportunity but a test of faith.”

The Puritans’ theology demanded they keep eternal vigil over their own thoughts. Thomas Hooker described original sin through the example of children who “can know nothing nor learn to do nothing, yet they will easily take in naughty words and tattle them when they know not what they talk.” The easy thoughtlessness with which Thomasin’s toddling sister proclaims herself “The Witch of the Wood” is always on the tip of our tongues.

Thus the theological disputes did not cease in the City on a Hill. Even before the end of the 1630s, Hooker split from Massachusetts to found Connecticut, and Roger Williams was banished to what would become Rhode Island; the obscure dispute which opens The Witch is in keeping with a period of anguished and inevitable debate over the one true path to grace.

The wilderness of New England was not just an opportunity, then, but a test of faith. Throughout The Witch, originally titled The Witch of New Canaan Woode, “the woods” are a place of peril, where the children are warned not to go. Thomas Hooker said: “I know there is wilde love and joy enough in the world, as there is wilde Thyme and other herbes, but we would have garden love and garden joy, of Gods owne planting.” We cultivate corn in the garden, rather than pick apples in the woods.

In his 1670 sermon ‘A Brief Recognition of New-Englands Errand into the Wilderness’, Samuel Danforth elaborated on this theme, explaining the same passage from the Book of Matthew with which the film opens: “John began his Ministry, not in Jerusalem […], but in the Wilderness, i.e., in a woody, retired and solitary place, thereby withdrawing himself from the envy and preposterous zeal of such as were addicted to their old Traditions” – the wilderness is for his flock, as for William, a place free of men inconstant like reeds, and of men “clothed in silken and costly Apparel.” (In Samuel Willard’s account of the demonic possession of Elizabeth Knapp, which Eggers would have read, the Massachusetts teenager likewise says that the Devil promised her clothes of silk.) But, as Danforth warns:

To what purpose did the Children of the Captivity upon Cyrus his Proclamation, leave their Houses which they had built, and their Vineyards and Oliveyards which they had planted in the Province of Babylon, and return to Judea and Jerusalem, which were now become a Wilderness? was it not that they might build the House of God at Jerusalem, and set up the Temple-worship? But how shamefully did they neglect that great and honourable Work for the space of above forty years? They pretended that Gods time was not come to build his House […].

It was around this time – some 40 years after facing the perils of the sea and arriving in the wilderness – that the New World experienced its first witch trials, in Connecticut. For the second and third generation of Puritans, born in the New World, hardships like crop failures and wars with the Indians – and political disappointments like the failure of Cromwell’s Protestant revolution – were a sign that their forefathers’ work building this Jerusalem was yet to be complete. The Witch pushes up the timeline of the Puritan witch hunts, but retains their fearful logic.

The Puritans knew that witches existed because they knew, as Perry Miller explains, “that Satan can simulate an angel of light and lead men to destruction by giving them false confidence.” They were prepared to see them because that doctrinal uncertainty was “aggravated among the Puritans to a frenzy by their apprehension lest they be swindled of true grace with a premature and natural counterfeit.” (This apprehension gave us Connecticut and Rhode Island.)

From the Connecticut witch trials of the 1660s, from Salem, from Willard’s account of the possession of Elizabeth Knapp and Cotton Mather’s accounts of the possessions of Martha Goodwin, Mercy Short and Margaret Rule, Eggers has taken a lot for The Witch: accounts of “fits” and coordinated spasms of accusatory hysteria; mysterious cuts and bruises; “blood covenants” and levitations. Most of all, he’s taken the bone-deep Puritan logic of witch hunting: sin causes affliction; repentance is achieved through confession. In Salem, witches were hanged on the basis of “spectral evidence”, the accused persecuted for tormenting the accuser with a demon only they could see. Against this, you cannot prove your innocence, because affliction itself is proof of guilt.