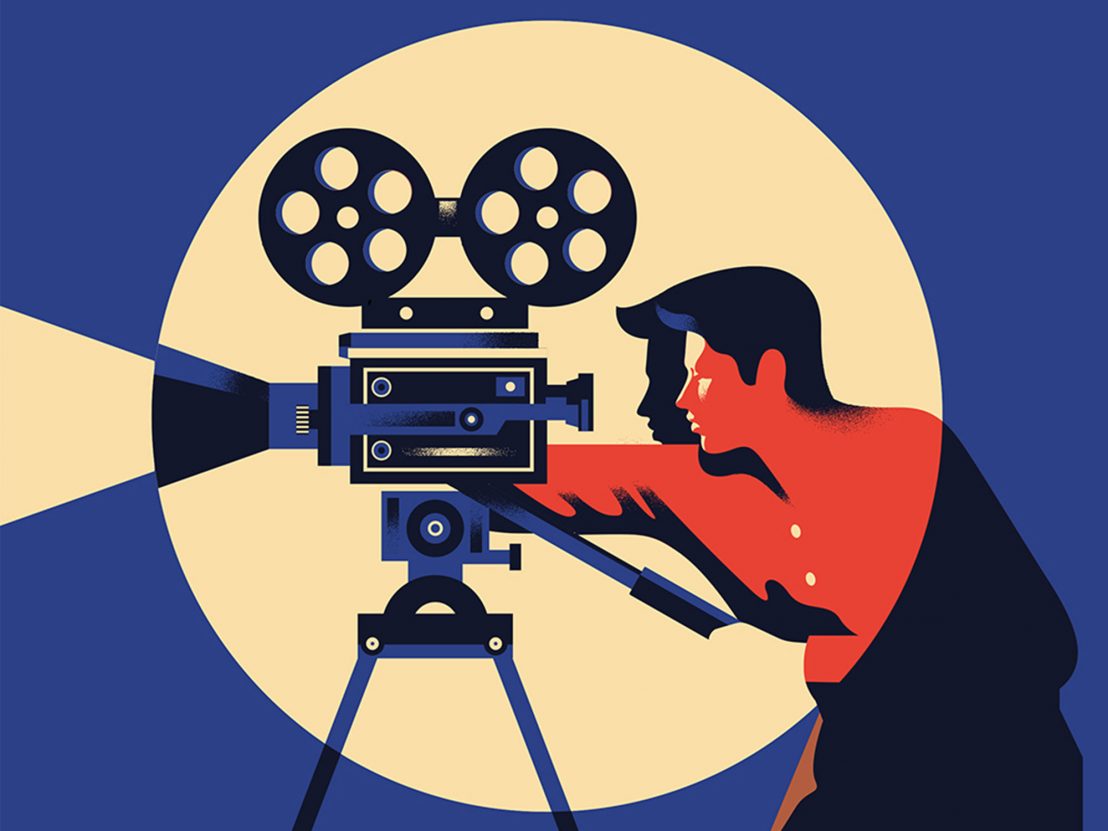 Over the past decade, the alliance between physical film and information technology has shifted. Digital capture and projection have launched full-scale invasions on film production and exhibition. Meanwhile, celluloid film has been threatened with extinction. Is it not possible for photochemical and virtual moviemaking to live side by side?

The resistance to the digital onslaught is real. Christopher Nolan has said that Dunkirk will be exclusively released on 35mm, 70mm and 70mm-IMAX prints several days before it is screened on digital formats. Kodak continues to manufacture motion picture film, and are doubling down by bringing back their discontinued Ektachrome stock.

In the past year alone, movies such as The Love Witch, Person to Person, Porto, The Eyes of My Mother, Too Late, Batman V Superman and The Lost City of Z have all had select screenings on 35mm alongside their digital releases. But what can you do to battle for film as a physical entity? Let’s band together and take heed of these six simple resistance tactics.

“It’s got better resolution, better contrast ratio, and it sees the way the eye sees with grains emulating the dots as opposed to pixels,” said director James Gray in an interview with mubi.com. Or, as a recent Kodak presentation had it: “Want the film look? Shoot film.” If filmmakers want celluloid to remain a creative option, it’s their duty to stop dreaming about shooting film and figure out a way to do it. Granted, it’s franchises like Mission: Impossible and the latest iteration of Star Wars that are keeping film stock alive as a going industrial concern.

For independent moviemakers, film can seem intimidating compared to the cheapness and immediacy of digital video cameras. But there are options: if you want to shoot 35mm, Kodak’s Independent Production Package offers cut-rate plans. Or you could try 16mm by picking up a Bolex on eBay for a few hundred pounds – there are a wealth of online tutorials to teach you how to use them, not to mention artist workshops like East London’s no.w.here. The old home movie formats are still alive, too. Witness the inventive, creative work being done by entrants of Straight 8, a challenge to shoot a short film on a single cartridge of Super 8 without any post-production.

Shooting film is an addictive, rewarding process. You can be satisfied not only by the whirring noise of the camera, but by being part of a special club of people who are finding fresh ways to use old technology. Top directors like Quentin Tarantino, Paul Thomas Anderson, Kelly Reichardt, Wes Anderson and Xavier Dolan work almost exclusively on film, while Steven Spielberg, David Lynch and Martin Scorsese are returning to film after brief flirtations with digital.

The celluloid release of Dunkirk is a great opportunity to find out which cinemas are on the vanguard of fighting for film and which have surrendered to the digital simulacrum that Quentin Tarantino calls “television in public”. Find out where Dunkirk is playing on 35mm and 70mm near you. Make a trip to see it as the director intended. If your nearest cinema isn’t on the list, why not? Ask them if they still have a 35mm projector, and if so, is it in storage or ready to use?

In London, BFI Southbank, The Prince Charles Cinema and Close-Up are just a few of the venues that regularly show tip-top repertory prints. But while it can sometimes seem like film has become a rare delicacy served only in the capital, there are venues nationwide that make time for it, including Glasgow Film Theatre, Bradford’s National Media Museum and Newcastle’s Star and Shadow (which is undergoing renovation and needs volunteers).

This is not to mention the multitudes of regional cinemas that have projectors and don’t use them. Get involved, see prints when you can, and think about starting your own independent programming group. We started the Badlands Collective with limited experience in exhibition, and we’ve gone on to screen rich, vibrant prints of gorgeous films like Jonathan Glazer’s Birth, Stanley Kubrick’s Barry Lyndon and Terence Davies’ The Long Day Closes.

For extra credit: learn about the difference between film prints made from real photochemical negatives and those that have been printed onto film from a digital ‘film-out’ process. Many recent prints are made the latter way, so even when distributors and cinemas tout ‘special 35mm presentations’, they may be missing out on the billions of colours and deep, dimensional contrasts that make the best film prints pop.

In 2002, Steven Spielberg commissioned a digital alteration of E.T. to “put a touch of rouge on a pallid face.” By 2011, he’d reversed his decision and re-issued the film with its original puppetry intact. “I had robbed people who loved E.T. of their memories.”

“If it can be written, or thought, it can be filmed” was Stanley Kubrick’s famous dictum, and with CGI, this is now truer than ever. Yet while digital worlds can be expansive in scale, their lack of tangible authenticity can negate any humanity and soul. When visual effects are captured in camera, an emotional connection is created – from the craftspeople, the actors and the filmmakers interacting with them – and that transmits to the audience.

Don’t we connect with E.T. because of the care that has gone into making him real and the way the cast embraces him? (Famously, Spielberg kept the mechanics out of sight so the child actors would believe in him.) When we watch Buster Keaton racing across the top of a moving train, we know that he’s doing it for real. It’s elating, and human, in a way that Daniel Craig’s head digitally added to the body of a stunt double attached to invisible wires is not.

The great cinematographers throughout film history have required fine judgement of light, shadows, timing and framing to transform locations into emotionally vibrant compositions. In the days before digital images were instantly viewable on set, a cinematographer was in fact regarded as something of an alchemist, whose knowledge of film sensitivity, lenses and lighting was crucial. In recent years, however, the Oscar for Cinematography has been awarded to works like James Cameron’s Avatar, Ang Lee’s The Life of Pi and Alfonso Cuarón’s Gravity.

It’s not that these films haven’t had excellent contributions from their camera departments, but that their visuals were largely built by computers, long after the shoots ended. The Coen brothers changed the landscape in 2000 with O Brother, Where Art Thou? when they used digital post-production to cast the whole film in sepia tones; Roger Deakins was nominated for an Oscar, but how do you gauge his contribution? We know that in the analogue days, cinematographers were heavily involved in technological problem-solving.

When John Alcott shot Barry Lyndon, he and Stanley Kubrick developed cameras and lenses that could capture scenes illuminated only by candlelight. When Vilmos Zsigmond shot McCabe & Mrs Miller, he made the risky move of “flashing” the negative (exposing it to light) before production to achieve the film’s soft and faded images. Remember this heritage. Read books like ‘Man with a Camera’ by Nestor Almendros and ‘Painting with Light’ by John Alton. Understand that a key part of physical filmmaking involves audacious choices by great artists who dare to push the boundaries of their craft.

5. Understand how film is archived

Film remains the most stable medium with which to store and preserve movies. Technological advancements in digital archiving can render data formats and storage media obsolete within years, meaning that digital film files require frequent, expensive and time-consuming migrations. Writing for The Dissolve, Matthew Dessem used the recent James Bond films to highlight the frightening rate of technological obsolescence in digital movie archiving: “[A] film that was archived to tape in 2006 using then-state-of-the-art LTO-3 tapes can’t be read by the LTO-6 drives that are for sale today. In other words, the tape drive that created an archival copy of Skyfall in December 2012 wouldn’t be able to read the original 2006 copy of Casino Royale – the technology becomes obsolete faster than James Bond is recast.”

Film, on the other hand, can last for centuries. Speaking to The Washingtonian magazine in 2014, the National Archives’ motion picture preservation specialist Criss Kovac noted that if a new copy of a film is created, “We know we can come back to it in a couple hundred years and it’s still going to be here, exactly the way it was when we printed it.” Having been successfully used for over a hundred years, history proves that film is a known quantity for the storage, preservation and archiving of movies. As Christopher Nolan told a gathering of archivists at the Getty Research Institute in 2015, “There’s no stable digital archiving medium, [at least not] in the immediate future. If there is, it would need to be tested for decades.” He concluded that photochemical preservation was essential: “It works and is future-proof.”

If someone says film is an obsolete technology, correct them: it’s important to spread understanding that as long as archival film stock is being produced, we are keeping cinema alive for future generations.

Cinema is a magic trick. It’s the illusion of movement generated by light hitting a series of still frames. The best filmmakers are magicians, achieving extraordinary and sometimes impossible feats in front of our eyes. It feels like a miracle, and in countless film scenes where we see characters going to the cinema, their eyes are always looking up, towards the heavens in a spiritual communion.

The projectionist is integral to the experience – they are the agent of the miracle. As the movie rolls, a relationship forms between him or her, the film and the audience. Film projection is a craft; it involves the meticulous preparation of prints, in which the reels are inspected, laced and loaded onto the platter, and requires constant work throughout the film. And, because the same prints are distributed over a long time, we share the experience of each one with the generations that have shared it before us. In this sense, each print is its own history coming back to life. And if we embrace that, the magic lantern show lives on.