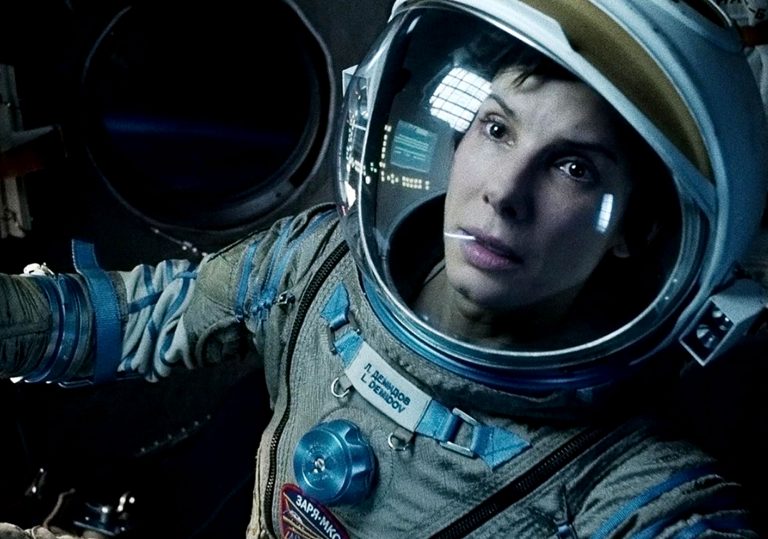 This was a whole long time in the making, so you’ll forgive the mild trepidation.

A symbolic drama about overcoming depression packaged inside a ‘trapped in space’ movie.

The science fiction film to which Alfonso Cuarón’s extraordinary Gravity bares the most striking resemblance is the ‘What Happens During Ejaculation?’ sequence in Woody Allen’s Everything You Always Wanted to Know About Sex* But Were Afraid to Ask.

Here, instead of nebbish Woody dressed in a white spandex suit and crash helmet, we have Sandra Bullock and George Clooney as the floundering sperm, placed in an against-all-odds situation and driven by a singular desire to be The One to penetrate the skin of the glowing egg that is the Earth’s atmosphere.

On a superficial level, this is your regular, down-home disaster movie in which we join a trio of plucky, bantering astronauts during a routine space walk which goes very south very quickly. Their trio swiftly becomes a twosome and the remainder of the film comprises a catalogue of micro-second clutches and grabs for a lifeline of any sort.

Yet – and some may find this side of the film a mite on-the-nose – Gravity operates as a bold (possibly even eccentric) and majestically rendered parable on the wonders of creation, with a very specific focus on the details of reproduction. Imagery of umbilical chords, foetal positions, wombs and characters triumphantly surfacing from the amniotic river sit surprisingly comfortably against a visual backdrop of decaying space stations and an infinite shroud of nothingness.

Stylistically, Gravity takes Cuarón’s creative partnership with cinematographer Emmanuel Lubezki to its breathtaking natural conclusion. The visual schema of the film is clearly inspired by the minutely orchestrated (and occasionally controversial) sequence shots that featured in his 2006 film, Children of Men.

And while in that film the mastery of technique threatened to choke the human drama and come across as needless showboating, the zero gravity setting makes the casual employment of these sinuous and innovative long takes far more dramatically coherent while fusing much more tightly with the essentials of the story. The experience of free floating in space is central to the film’s success, and Lubezki’s camera itself feels like a rogue crew member (dare we say it, God?) observing the folly of his hapless charges.

It’s been seven years since Children of Men, and bar the odd production gig, Cuarón has not directed a film since. Yet within the first three minutes of the film is plain to see that no time has been wasted and that the director and his cinematographer were beavering away creating something a bit new and a bit different. Now let’s not be going all crazy and calling it a new visual language or anything – De Palma was half way here with his severely underrated Mission To Mars, from which this cribs more than a few key sequences – but this film, particularly its look, needs to be seen to be believed.

There are references to all manner of space movies, both new and old. Clooney’s character, Matt Kowalski, feels like he might have once been a crew member of the Dark Star, while Bullock’s Dr Ryan Stone gets out of one particularly tight scrape by using a fire extinguisher to enact a full-bore homage to WALL-E. While Clooney gets to spew his customary wiseacre patter, it’s Bullock who’s the casting masterstroke here, bringing a mildly bland everywoman tinge (or, the sort of person you could actually imagine working for NASA) to the stock super-heroics required of her character.

CG-incarnations of their bodies do much of the heavy lifting as they’re flung around like rag dolls or yo-yos. Yet later in the film during a rare moment when you can actually see the actors’ faces, Bullock gets to deliver a devastating monologue about the melancholy feeling of staring death directly in the eyes that, frankly, would not have been out of place in a Woody Allen movie.

This was a whole long time in the making, so you’ll forgive the mild trepidation.

A symbolic drama about overcoming depression packaged inside a ‘trapped in space’ movie. 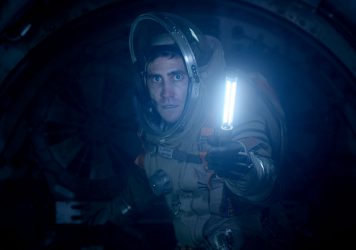 Mars attacks in this underpowered creature feature with a crew of A-listers trapped on the International Space Station.