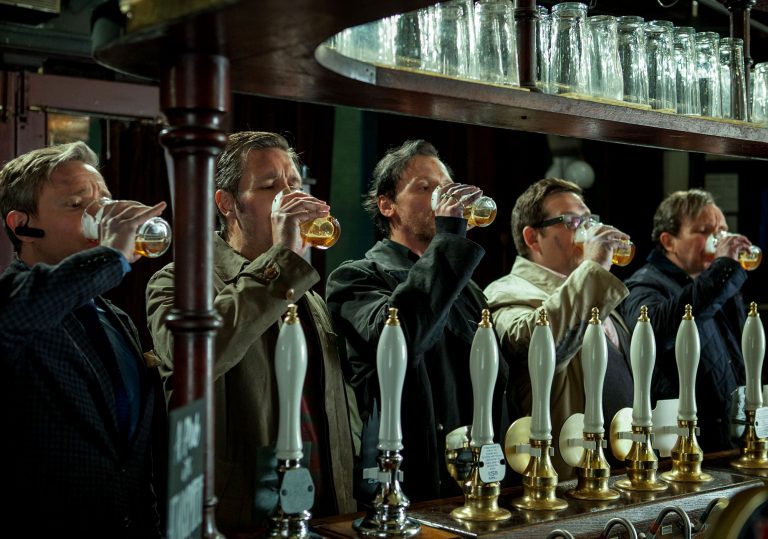 Hard to resist a one last.

A worthy trilogy closer that suffers without the element of surprise enjoyed by its predecessors but still manages to leave a sweet taste in the mouth.

Destined to be the bridesmaid of the box-set.

Lagergeddon? The hopocalypse? The bitter end? Edgar Wright and co are back for one final throw of the dice.

Can things ever go back to the way they were? It’s a question that, for better and worse, takes on a two-fold meaning in Edgar Wright’s latest T-shirt slogan-spawning buddy caper: first as a direct link to the film’s plot; second as a veiled statement of self-reflexivity.

Upon returning to their sleepy home town of Newton Haven, “the five musketeers” discover that, to no one’s surprise, nothing much has changed since they’ve been away. But when a number of regulars fail to recognise them, the gang quickly arrives at the conclusion that all is not groovy.

Being that they’re already beyond the pint of no return, however, they decide to see their plan through to the bitter end (intellectual property credit: E Wright, S Pegg) – which for Gary means crossing off that elusive drinker’s dozen while Steven is preoccupied with getting reacquainted with former flame Sam (Rosamund Pike), who happens to be Oliver’s sister.

In many ways The World’s End is Wright’s most sentimental work – in essence a film about lost camaraderie, misspent youth and the crushing inevitability of growing up. That’s if you choose to take it at face value. Because despite various emotional beats often (but not always) hitting their mark, it’s impossible to avoid the (knowing?) irony that Wright has now essentially made the same film three times; the first and last arriving close to a decade apart. If this is Wright attempting to reclaim past glories, however, the result is only marginally worse off for it. (NB: The World’s End is loosely based on a script Wright wrote when he was 21 entitled ‘Crawl’, which was inspired by his pub crawl attempts as a teenager.)

Of course, the Blood and Ice Cream trilogy was mapped out long before Shaun wielded his trusty cricket bat at our screens. Yet it’s disappointing that the best moments in The World’s End are continuations of running gags from the two previous films. It’s another round of spot the sci-fi movie pastiche/intertextual reference – hurdled fences, branded frozen desert, etc — that culminates in an explosive set piece-driven finale stuffed with more Easter eggs than Willy Wonka’s spring basket.

The scripting is as tight as ever, the hat-tipping just as clever, but it’s largely funny through familiarity. Yet even though some of the jokes are starting to wear a little thin, it’s testament to the enduring popularity of the series’ central trio that this third instalment ticks so many boxes without bringing anything new to the table.

Like Hot Fuzz before it, The World’s End is underpinned by the sense that Wright is destined for bigger and better things. Having repeatedly raised the bar for British comedy and now having seemingly called time on collaborating with his Spaced brethren, the question is whether Wright can fulfil the promise of Scott Pilgrim and come up with a new recipe for success.

Hard to resist a one last.

A worthy trilogy closer that suffers without the element of surprise enjoyed by its predecessors but still manages to leave a sweet taste in the mouth.

Destined to be the bridesmaid of the box-set.