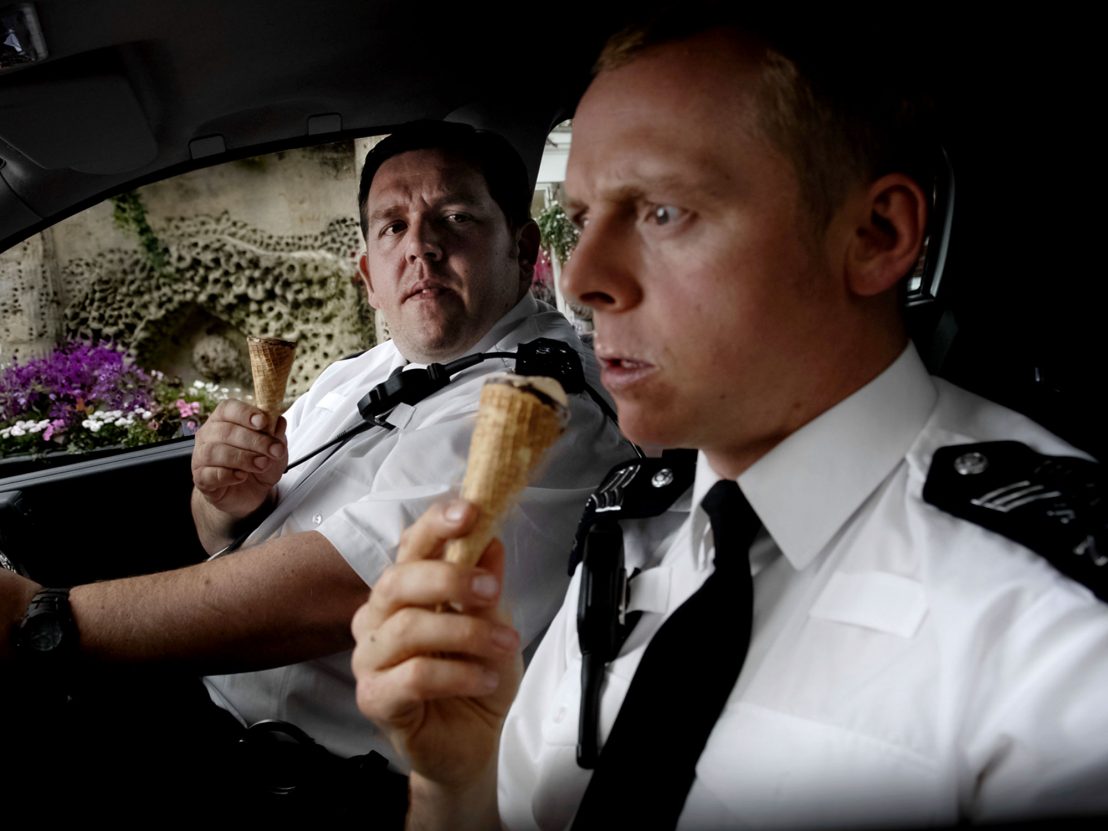 Britain is going through its own personal horror movie at the moment. And it’s not one of those creepy, slow-burn, violence-happens-in-the-shadow jobs – it’s full on skin-flaying humiliation and sustained suffering to the extremities. It’s like a slasher movie, where the country is both the victim and the one swinging the axe. Edgar Wright knew the score when he skewed this toxic, self-lacerating “Little England” syndrome in his 2007 film Hot Fuzz.

Although you wonder whether, way back when, the writer/director realised that his fantasy would gradually evolve into prophecy. It has now reached the point where the stereotypes have become archetypes – it’s like Wright had his own secret CCTV camera pointed into the future and was chuckling at the absurd results filtering through to his monitor. Where its social commentary may once have read as a jocular, Hogarthian satire of typically English mores, the film now plays like the mother of all cold showers. But a very funny cold shower, if that’s possible.

What’s more, it’s a film which asks that you sympathise with a quasi-fascistic police officer who is transferred from the mean streets of London to the quaint, cobbled lanes of Sandford in Gloucestershire. In the role of Sergeant Nicholas Angel, Simon Pegg manages the rare feat of humanising a cop who sees through the veneer of hanging baskets, slate-floored pubs and village fêtes to the political rot that festers beneath.

To tar the entire population of the UK with the same political brush would be foolish, but it’s hard to not see Sandford as a place which exemplifies the attitudes that sent the country flailing over the Brexit cliff. This is a film about the urban metropolitan elite struggling (and, ultimately failing) to impose their values on the angry rural communities of Britain. It’s less interested in lambasting either side of the political divide, than it is highlighting a tension that would only become more fractious and intense as the years rolled on.

The fear of cultural alienation is at the core of Wright’s ‘Three Flavours Cornetto’ trilogy, of which Hot Fuzz sits smack dab in the middle. First out of the traps was 2004’s cult favourite Shaun of the Dead, in which a standard issue zombie infestation is framed as a clarion call for dead-eyed bums to turn off the Babylon Five marathons and go frolic in the fields. It was a simple, humane plea for us to enjoy life and the company of others before we die. The World’s End from 2013 was Wright’s lament for putting away childish things and being forced to embrace an uncertain future. It felt like a return to the scene of the crime envisioned in Hot Fuzz, an attempt to reclaim a notion of Olde Albion than no longer exists, or does so as an indistinct, lager tainted reverie.

And yet you wouldn’t necessarily think of Wright as a political filmmaker, because his work draws so heavily on elements of parody and homage. His love of the form, too, and the way he lavishes in the process of production makes that connection even tougher. The characters he builds are unabashed cinematic constructs whose traits feed off of silver screen lore more than they do documentary reality.

Hot Fuzz doesn’t translate as a cynical film about the perils of country living, as the details of its world are so over-emphasised and obviously played in a humorous tenor. Yet the central idea of a community fuelled by narrow-minded paranoia rings chillingly true in the post-Brexit era. It’s no coincidence that Edward Woodward, star of the ultimate desecration of weird old England, The Wicker Man, plays a supporting role here as tinpot head of the Neighbourhood Watch Alliance (NWA).

Beyond its myriad cinematic reference points, which are all listed within the film, Hot Fuzz has the lively, bitter fizz of an Ealing Comedy, specifically Alberto Cavalcanti’s 1942 wartime propaganda picture, Went the Day Well? In that film, the picturesque English village of Bramley End, presented as a paragon of nationalistic pluck, battens down the hatches to ward off an apocryphal Nazi invasion of the homeland. The film mixes stirring patriotic sentiment, light comedy and grotesque violence to make its point about the lengths we must go not only to preserve our freedom, but the very idea of Englishness. Hot Fuzz is a downcast rejoinder to that film, suggesting that the victory might have been a hollow one.

As an artist, you might call Wright a dewy-eyed nostalgist, as his film work channels so much that is ripped directly from his personal past. He is like a funtime space-nerd Proust with a predilection for using page-turn swooshing sounds along with edits. His latest, Baby Driver, is an entire film as a remembrance of things past, with tinnitus-addled getaway driver Baby (Ansel Elgort) almost becoming a stand-in for the director himself, where nostalgia is almost a medical condition.

It’s this nostalgia which prevents films like Hot Fuzz from coming across as hard cultural critiques, yet the shield of satire is also what makes the political edge even sharper. It’s a film about the utterly insane, conspiratorial ends that nationalistic little Englanders will go to stave off the coldly rational influence of outsiders who are only out to ruin their fun. Indeed, Nicholas Angel is so robotically rational that you do end up thinking that his draconian methods maybe are a little too much when coupled with a more relaxed and outwardly friendly way of living.

What Hot Fuzz teaches us is that it’s foolish to think you are culturally superior to anyone else. If you see another group of people as the enemy, they probably see you as their enemy too. And that’s how civil wars start. The chuckling denizens of Sanford are initially presented as imbecilic yokels who have been comfortably numbed by their secluded existence, but they know what time it is. In fact, their pantomime of cordiality could be seen as an early form of trolling – as if they are knowingly acting in a way that would irritate and disturb an invading force. It’s amusing that James Bond himself, Timothy Dalton, would play a smug English isolationist, but also one whose nostalgic beliefs in the preservation of way of life drive him towards gory violence.

Eventually, Wright brings in the heavy ordinance to drive his final point home. “You wanna be a big cop in a small town? Fuck off up the model village.” says Rafe Spall’s mouthy detective, and that’s exactly what Nicholas Angel does: he heads to a climactic showdown which takes place in a miniaturised replica of Sandford. But Wright isn’t annihilating life outside urban capitals, he’s annihilating an old-fashioned and potentially dangerous conception of that life. Rejecting progress can be dangerous, and so can clinging to a false sense of nostalgia for a time that never was or a place that never existed. In the end, Wright just wants us all to drive safe.