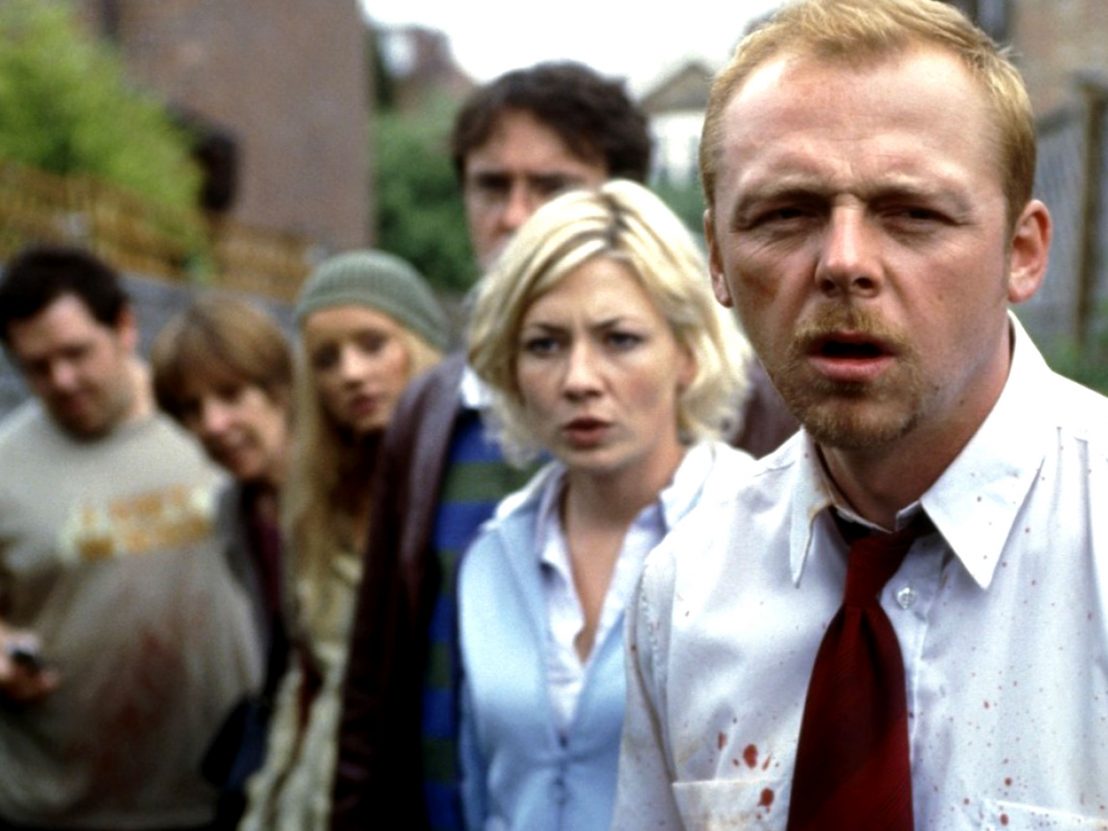 It’s easy to identify an Edgar Wright film. For starters, his name appears in the credits. But his unique method of shot transitioning also stands out like an enthusiastic student in a class of layabouts. His work is energetic and quirky and often parodies genre, making light of zombies in Shaun of the Dead, the action hero fantasy in Hot Fuzz, the gaming and comic book worlds in Scott Pilgrim vs the World, and the threat of an alien invasion, made worse by beer, in The World’s End.

His fifth feature, Baby Driver, is an ambitious departure from his earlier comedies, veering more towards action thriller, but it still screams his unmistakable style. So what makes an Edgar Wright film? Here are six scenes which we feel best illustrate his distinctive approach to filmmaking.

Aside from popping up on social media in meme form whenever there’s a national disaster, this endlessly quotable scene in Shaun of the Dead is one of the finest examples of Wright’s hyper-kinetic filmmaking style. It’s like a concentrated burst of his personality, bringing together his various editing techniques in one succinct montage. As Shaun and Ed devise a plan to prevent them getting munched by zombies, we’re bombarded with swiping transitions, quick action shots of Bill Nighy getting bludgeoned with a cricket bat and extreme close-ups of a mug. He did something almost identical in the sitcom Spaced, which suggests he’s quite fond of this form of exposition.

Like in most films or shows where scores of people are brutally murdered, a certain amount of explanation is required at the end. This scene in Hot Fuzz, where the villagers reveal themselves to be a cult of psychopaths who hold weekly council meetings, gives Wright the perfect opportunity to summarise the film’s various mysteries in his typically transition-friendly style. It demonstrates just how intricate his method of storytelling can be – using montages to call back to earlier, significant events – while also highlighting the ever-present threat of crusty jugglers.

Everybody knows that vegans have special powers. Partake not in the meat, nor the breast milk, nor the ovum of any creature with a face and you’ll be granted the ability of telekinesis and upward waving hair. At least that’s the case for Todd Ingram (Brandon Routh), who is able to toss Scott several hundred feet in the air with his mind. The suspended reality of Scott Pilgrim, which borrows its aesthetics from the gaming and comic book worlds, allows Wright to really experiment with his style. As it turns out, if you want to seamlessly transition from one location to another, smashing through walls is rather handy.

The final instalment in Wright’s Three Flavours Cornetto trilogy again sees the director relish making something as mundane as pouring a pint look as thrilling as a car chase. The opening scene of The World’s End more or less brings things back to basics. Using flashback montages under a rose-tinted filter, it nostalgically sets the scene for a monumental pub-crawl that will naturally result in various deaths. The characters are meticulously set up to foreshadow their impending, inebriated doom. Or dismemberment from alien robots.

Scott vs Gideon (Scott Pilgrim vs The World, 2010)

Wright’s retro gaming references culminate in an extravagant finale when Scott takes on Gideon Graves (Jason Schwartzman) in the final showdown. Set in the Chaos Theatre, which already looks a lot like an arcade or geek’s lair, there are callbacks to a dance mat routine and a power-up sword miraculously materialises from Scott’s chest. Even by Wright’s standards it’s an incredibly fast-cut sequence, but the brilliant choreography is never lost in the quick transitions. What’s even more impressive is that he somehow makes Michael Cera look like a convincing action star.

Hot Fuzz is instantly identifiable as an Edgar Wright film. That’s if you wait for Simon Pegg to finish walking towards the camera in the opening scene. Our introduction to Police Constable Nicholas Angel immediately establishes the action parody tone of the film, ironically building up his combat capabilities in a humorous montage. As his list of skills are reeled off, riding a bike and completing a multiple-choice test are made to look as dramatic as carrying out a drugs raid. It’s yet another fine example of Wright combining all of his techniques in one sequence, while also pointing and laughing at the genre.