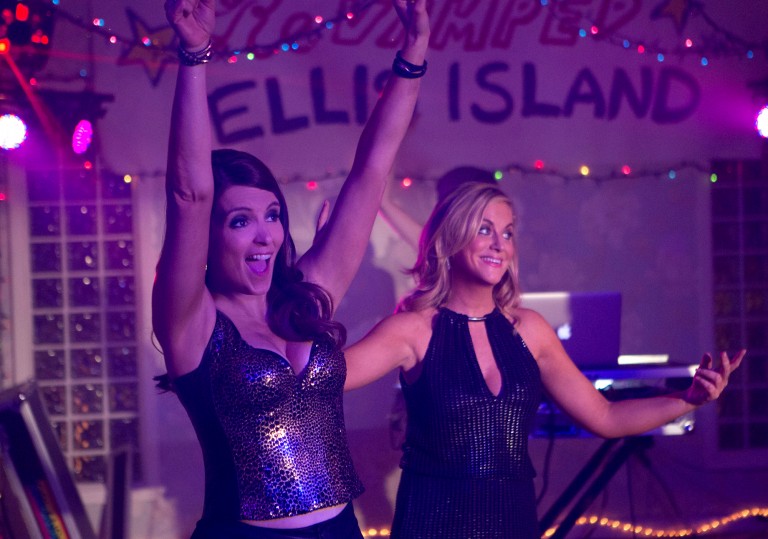 The first ladies of US sketch comedy finally receive a film vehicle.

Very entertaining without ever convincing as a story.

Worth seeing but not one for the ages.

Its most colourful trappings are its two stars: long time comedy collaborators, friends, awards co-hosts and book buddies, Amy Poehler and Tina Fey. The first ladies of US sketch comedy have established a finely-calibrated chemistry that causes quibbles with the architectural strength of Sisters to shrink in significance. Audiences that want to watch Poehler and Fey being funny together for two hours will not be disappointed. Being funny together is their brand and they deliver like slick A-game professionals.

Comic range powers Poehler/Fey/Sisters, which tickles nothing so specific as a funny bone but a wide selection of ribs like a long-armed musician playing the xylophone. There are one-liners about age, sexuality, clothes, character, drugs, sex, friends, enemies and family. There are physical set pieces spanning slapstick (putting a dress on backwards) drama (a swimming pool caving into a sink hole), and the dramatically slapstick (people plummeting through ceilings).

Destruction is the overriding theme: the destruction of a house and the destruction of old childish identities. The story is about two sisters who learn that their parents (Dianne Wiest and James Brolin) are selling their childhood home and accordingly decide to have one last party in which they switch roles. The sensible Maura (Amy Poehler) will be drinking to excess and trying to have sex with buff younger neighbour (Ike Barinholtz), while wild woman Kate (Tina Fey) will be abstaining from liquor so as to act as party mum.

Pitch Perfect director Jason Moore shoots SNL writer Paula Pell’s script. Theirs is a world in which tidying up an old bedroom involves a montage of hijinks and still, miraculously, the room ends up neater. Making pot brownies involves saying, “I’m going to make brownies.” Cut to Tina Fey passing round a tray of brownies. Cutting out the slow-paced graft of existence, like an anti-Chantal Akerman, clears the stage for Poehler and Fey to dance their precisely-stepped dance through a chaos of their own making.

The wrestler, John Cena, who flexed his literal and comedic muscles alongside Amy Schumer in Trainwreck, reappears to do the same for another lucrative Amy. He is amongst the funniest of the ensemble support cast members, giving a deadpan performance as a drug dealer and object of Kate’s lust. When she asks, ‘Do you have children’ and he responds, ‘I’m sure I do’, his complete lack of intonation is what makes the line hilarious.

Maya Rudolph pitches the villain of the piece, Brinda, between arch bitch and desperate party crasher. The stand-offs between her and Fey are a lesson in how to stage a witty cat fight. Ike Barinholtz is mostly saddled with the straight guy part, but all this changes in the wake of a painful incident with a figurine. The best line in the film – a stoical description – is his. Not all performances are a hit. Bobby Moynihan is so shrill that when his character takes drugs and becomes still shriller, you’re praying that someone has a tranquilliser gun.

The film heads towards wonderful wild destruction but as with the room sequence, carnage is righted with ridiculous ease. Consequences lack weight in Sisters making it fun but forgettable. Perhaps this is too stern a judgement to pass on successful entertainment. Cloud 9 is one of the drugs brought to the party. The brief brilliant highs it offers the user is equivalent to this light comedy.

The first ladies of US sketch comedy finally receive a film vehicle.

Very entertaining without ever convincing as a story.

Worth seeing but not one for the ages.