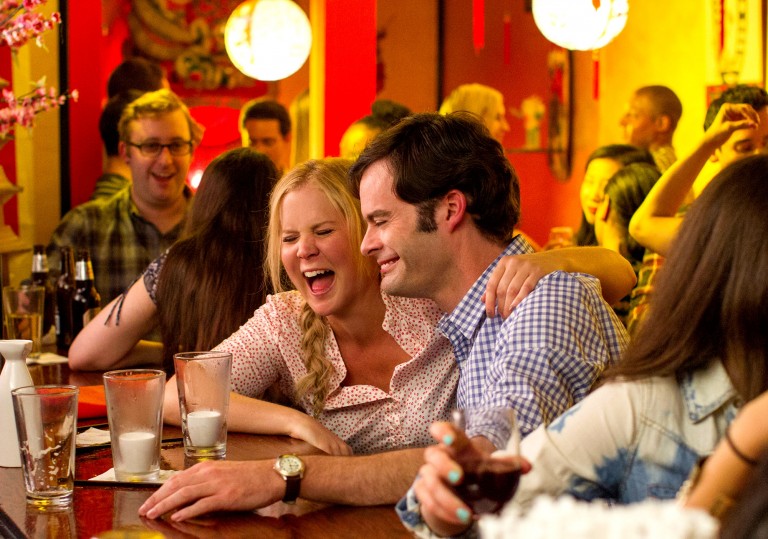 Distressingly familiar and only sporadically funny.

A victim of high expectations, the great tragedy of Trainwreck is that it’s still one of the funniest romantic comedies in recent memory.

Essentially an American remake of Amélie that swaps Marseilles for Manhattan, Audrey Tautou for Amy Schumer, and whimsy for sex jokes, Trainwreck is both the best romantic comedy of the year as well as its most crushing disappointment.

Star and scribe Amy Schumer is a rising force whose brand has been defined by side-eyed feminist humour and a ruthless skewering of gender representations in the media. Judd Apatow is the cinema’s poet laureate of man-children. Trainwreck isn’t a battle of the sexes so much as a meeting of the minds, but the ostensible disparity between the guiding voices of this collaboration (along with the fact that this is the first time Apatow has directed somebody else’s script), has foregrounded questions of authorship. When Universal Studios decided to blitz subways, bus stops and web sites with ads that read “From the guy who brought you Bridesmaids’, the claim felt as loaded as it did misleading (if Bridesmaids was brought to you by only one guy, that guy was probably Paul Feig).

Ultimately, however, Trainwreck doesn’t belong to either Apatow or Schumer, it belongs to the collective history of the severely familiar genre from which it spawned, and for all of the comic alchemy promised by this Avengers-like alliance of comic titans, Trainwreck is the most conventional movie that Judd Apatow has ever made.

Schumer plays Amy Townsend, a modern New York woman who was raised not to believe in the magic of monogamy – a hacky prologue, set during Amy’s childhood, finds her newly divorced father (Colin Quinn) forcing his two young daughters to repeat, “Monogamy isn’t realistic,” like a mantra. Cut to Amy’s adulthood, where that mantra has metastasised into a self-fulfilling prophecy.

A perpetually single woman for whom a walk of shame is the most frequent mode of transportation, Amy is – to borrow a phrase from the film’s German title – a “Dating Queen.” She loves sex (or the finite relationship it provides) almost as much as she hates intimacy (or the abstract connection it entails), and her commitment to that fuck-and-run lifestyle is so deeply engrained in her sense of self that she resents her younger sister (Brie Larson) for getting married and raising a kid.

The film doesn’t judge Amy for that, and neither should we, but she clearly isn’t happy. On the contrary, she’s an expert in the Apatowian art of self-sabotage, careful to accept the love she thinks she deserves and never make herself available to anything more than that. Like most rom-com heroines, Amy is a journalist who works at a magazine of questionable quality, and like most rom-com heroines, she falls in love with the subject of her latest story (in this case a prominent sports doctor named Aaron, whose played by a winsomely grounded Bill Hader). What sets Trainwreck apart from the rest of its ilk is that Amy doesn’t throw herself at the feet of her love interest, nor is Aaron the catalyst that sparks her personal growth – if anything, he’s a human yield sign, encouraging the heroine to reassess her situation.

The film’s shaggy plot, which refreshingly hinges on abstract personal growth rather than a contrived series of incidents, chronicles Amy’s journey towards embracing her own self-worth, and experiencing how that manifests in her love life. If that sounds a bit Hallmark, note that there are not one, but two separate jokes in the movie that compare someone’s genital situation to a scene from Game of Thrones.

As the opening scene makes clear, most of Amy’s issues stem from her father, and the relationship between those two characters is endlessly more interesting than the one that percolates between she and Aaron. Schumer’s father was diagnosed with multiple sclerosis when she was nine, and Quinn’s fictive version – who suffers from the same inflammatory disease, and moves into an assisted living facility early in the film – is tenderly imbued with the subtle details of second-hand experience. Quinn, who isn’t exactly known for his nuanced dramatic performances, delivers a turn so lived-in and true that you hardly even notice that his neighbour at the nursing home is played by 100-year-old screen legend Norman Lloyd (whose first role was in 1942’s Saboteur!).

The rest of the film’s enormous supporting cast is similarly unpredictable. Tilda Swinton, who’s scarily realistic as Amy’s bronzed and merciless editor-in-chief, nevertheless feels out of sync with Apatow’s rhythm – her material is well beneath her talent, and most of her dialogue is delivered like she’s looking for approval from behind the camera. Elsewhere, in a surprisingly significant performance that’s almost worthy of the attention it’s sure to receive, LeBron James plays a sensitive version of himself as Aaron’s client and confidant, putting a nice spin on the typically female best friend trope.

Still, almost everything that makes Trainwreck special can be traced back to Quinn’s character, who provides the film an emotional bedrock and grounds Schumer’s protagonist whenever she threatens to spiral towards the oblivion of caricature. Which is often. Schumer has great potential as an actress, but the same qualities that make her such a force on her sketch comedy show make for a stilted and overly mannered performance that never allows for Amy to cohere into anything more than an incongruous series of dry reactions. Each sketch on her frequently brilliant television show allows her to step into a new character and start with a blank slate, but Trainwreck finds her struggling to sustain an emotional through-line, and the transparency with which she hunts for a laugh or tries to land a sentimental note rubs against the semi-improvised naturalism that defines Apatow’s style.

And make no mistake: regardless as to whom Trainwreck belongs, it certainly feels like a Judd Apatow movie. Indulgent, sweet, and staged with all the visual panache of a sitcom (albeit a sitcom shot on 35mm by Martha Marcy May Marlene cinematographer Jody Lee Lipes), the film doesn’t find the Knocked Up director stepping forward or sideways so much as rocking a new wardrobe and standing in place. Trainwreck is no disaster – but in the wake of the much shorter and infinitely more satisfying ‘12 Angry Men Inside Amy Schumer’, it never feels like it even leaves the station.

Distressingly familiar and only sporadically funny.

A victim of high expectations, the great tragedy of Trainwreck is that it’s still one of the funniest romantic comedies in recent memory.