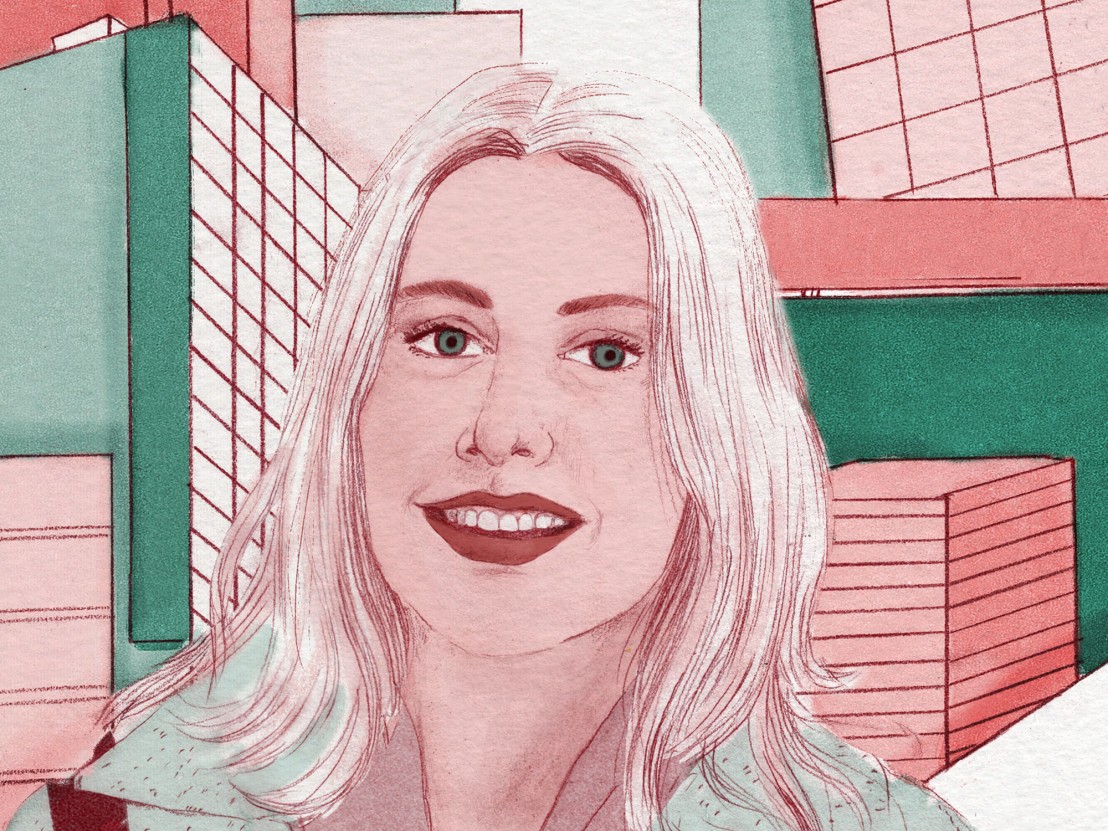 It should come as no surprise that Greta Gerwig is a profoundly thoughtful and energetically self-deprecating interviewee. Her off-kilter charm has seen her rise from mumblecore beginnings – working with the Duplass brothers and multiple times with Joe Swanberg – to indie-darling territory. She was delightfully grave in Whit Stillman’s Damsels in Distress, but it was Noah Baumbach’s Frances Ha that established her as a lead actress with the power to charm a wider audience.

Baumbach looms large in Gerwig’s life. The pair are partners both in the writing and romantic sense. Mistress America marks their third time working together and their second time writing together (Gerwig co-wrote Frances Ha). When LWLies sat down for 14 heavenly minutes with the actress, she was forthcoming on how this collaboration works without ever once mentioning his name.

LWLies: Mistress America really reminded us of F Scott Fitzgerald just in the way you have this kind of glitzy heroine, and it all seems so great, but there’s a lot of sorrow underneath. Is he an influence?

Gerwig: Structurally we did talk about ‘The Great Gatsby’, just in terms of how to meet a person as big as Brooke and with as many facets and layers and lies. And it felt that the right way to do it is through someone like Tracy who, in a way, was our Nick Carraway. Even in the way that in ‘The Great Gatsby’, there is that big showdown in the hotel, there’s some feeling of this thing that’s going to boil over, and getting sucked into the drama of somebody else’s life. I mean we didn’t literally think that we were making ‘The Great Gatsby’! We tend to look at different films as influences but also novels and short stories because I think it’s just the way both of our minds work. We tend to put a lot into the machine and see what comes out. It’s so pleasurable too. It reminded me of what it felt like to be in college and you’re writing a paper and you’re doing readings for all kinds of classes and all of a sudden something you read for a class that seems completely unrelated to the paper that you’re writing ends up feeding right into it. That’s how we go about writing scripts.

It sounds quite liberating because you can join things together rather than having a prescriptive route forward.

And also because we write so intuitively, we always let the characters dictate the story. We don’t write outlines. We just see where its going to go. To feel like, in some ways, your movie or your script is talking back to a set of influences is a nice way to make it feel less lonely.

Does the fact that you have a collaborator make it less lonely? And how does that even work, with something so personal as writing, to have someone else in as well?

Definitely, having a collaborator makes it less lonely. I would say we talk a lot about it. We talk about what we want it to be and what we think it is, and we go off and write, alone mostly. We’ll generate pages alone – so I’ll go off and write 10 pages and bring them back, and vice versa. Then we read them out loud and edit each other and start putting things together. What really happens is that we end up almost sharing… it feels like we share a brain about it. It’s not like we argue or say, ‘I think it should be this’ or, ‘I think it should be that.’ It’s like we intuitively build the same thing together.

It is. It’s very magical and it’s deeply pleasurable and satisfying to the point where, when we’ve written things separately, you really do miss having that other person to just share the task with and go on the journey with. I mean, we read drafts of what we’re doing, but it’s not the same thing. It’s different to be completely inside something with someone else.

Could you ever imagine having another writing partner?

Yeah, I have. I’ve been trying to write something with someone else and it’s a really strange process. I don’t think there are that many people you can write with, to be honest. It’s special and it needs to be cultivated. It takes time too, to cultivate it. And now it feels like, ‘Oh, well, we wrote together so well right away’, but the truth is, I think there was a lot of working towards it, and also I was so shy about what I had written the first time we worked together and then gradually got more confident about showing him work. But it’s like any relationship, it doesn’t happen overnight, you kind of have to build it and build trust with each other and it’s a long process.

Was he really encouraging when you were shy at the beginning?

Yeah, he always thought that my writing was really funny and rich and worth developing and I think that gave me so much hope for what I was doing. Yeah, he would always say he was excited to get my pages because he knew that they would be good, which was nice to hear.

Yeah, definitely. I mean his pages were amazing too, but that was more, he was also, in addition to being 14 years older than me, he was just more established and so I think he definitely had less self-consciousness around it.

So the character of Brooke, forgive me for making this link, but it seems like there is some kind of connection with the way she’s seen through Tracy’s eyes, Tracy just looking at her glorious outer shell. It strikes me that as an actress, maybe you have similar things, of people being like, ‘Congratulations on your excellent shell.’

Oh yeah, that’s true. You know, I never really felt like I had such an excellent shell to congratulate. Not that I feel bad about myself in any way but I always feel like I wish I could hide some of my flaws more than I can but I can’t, so ultimately I think that’s a good thing. But yeah, I’ve never felt quite successful at being someone who looks perfect. I think I always look like a person who put on a dress.

What flaws do you wish you could hide?

So many things. As anybody who’s been photographed, even by their friends at a birthday party, and then if you see a picture of yourself and think, ‘Oh god, I don’t walk around thinking I look like that, but Jesus!’ I mean, a million little things. I used to hate my smile because I thought I was too big and too gummy and now I’ve accepted that’s just my smile and it’s okay. I mean, that’s a physical thing. I wish I could hide my thought process a little bit more. Sometimes when I’m talking, I really think through my thoughts out loud with people and sometimes I wish I had an ability to come up with a pat answer more quickly. I wish I could stop appearing to be so nervous at times. My mother used to always say, ‘You should try to be more mysterious!’ And I was like, ‘I don’t know if anyone is going to buy that, mom.’ I feel like I’m not mysterious, I just won’t be able to pull it off. But I think she has an idea in her head of the Lauren Bacall type, deep voice, few words, sort of sexy and I said, ‘I don’t think that’s my type. I don’t think that’s what I’m going to read as. Ever.’

It seems like you’ve owned who you are now, particularly with Frances Ha. Does everyone now think you’re their best friend?

Ah, it’s really nice. In New York, I live by NYU, so every fall I see these freshmen moving in and they’re very sweet to me and it’s really nice. I like it. I suppose if you’re a person who’s hounded by paparazzi it could be horrible, but for me, I just have 17-year-old girls coming up to me saying, ‘Oh my god, I am Frances’. And I love that, that’s nice.

You’re not hounded by paparazzi?

Oh god, no. I live a blessedly anonymous life. It’s great. When I’m not working, I spend so much time just wandering around the city and working in different coffee shops and I think I would hate that, it would be a real bummer if that ever became my life.
What are you working on at the moment, apart from promoting Mistress America?
In September I’m starting a film, I’m acting in a film, written and to be directed by Mike Mills. He’s great. He did Beginners and Thumbsucker and he’s terrific and it’s a great cast. Annette Bening, and Elle Fanning and Billy Crudup. And it’s just a really beautiful script. It’s called 20th Century Woman.

We read this interview you gave to The Huffington Post where…

It’s just, it’s hard when people quote things back to me because I’m like, ‘What did I say? Oh no.’

It’s more like an interesting theme, rather than what you directly said.

It was about likability and the pressure to perform likeable characters.

Are there any particularly dark emotions that you’d like to explore that are not remotely likeable?

Oh, um, yeah. A million. I’m mostly interested in the things that you don’t want anyone to know about you. I think those are the things that when they are brought to light through art are the things that connect people and everybody completely understands it. And I think that humans have such a huge capacity for empathy, and it’s so weirdly underused in the cycle of building people up and tearing them down, but anything that taps into a sense of all of our brokenness is elevating, even though it feels like it’s showing something dark.

One hundred per cent agree. Films touch me where they connect with something that I feel is shameful and it’s freeing. What do you love about movies?

Um, I love that movies are a reverse magic show. I think magic is always about making something appear that wasn’t there, like making a bird come out of a hat or a bunny or something. And what I love about movies is it’s all this weight, like cameras and sound equipment and people and lighting and costumes and makeup and it’s all this weight and all this stuff and all this effort and then it disappears into 90 minutes of flickering light, and that’s a reverse magic show. It takes the physical and makes it spirit, which makes me sounds crazy, but that’s how I feel.