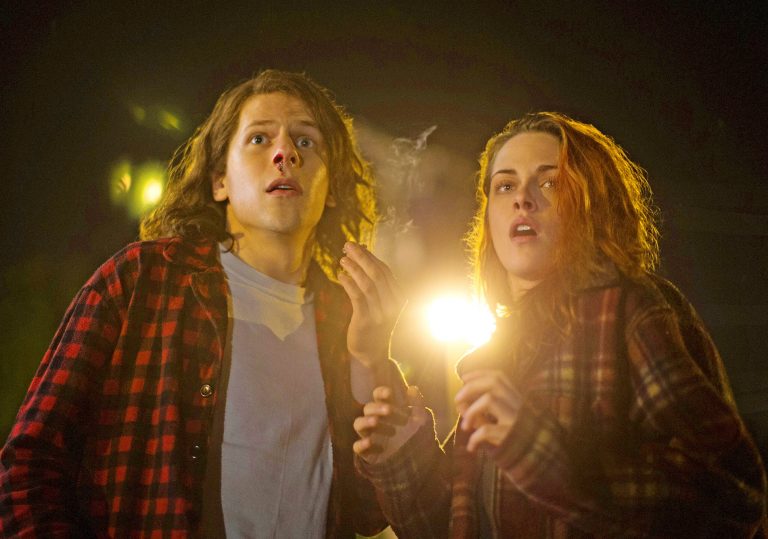 The film’s US reception was largely toxic.

American Ultra is a film about locating the right moment to take your life to the next level, to further a relationship, to entrench your maturity, to let the world know that you’re ready to take on everything it’s got for you.

It is the story of Jesse Eisenberg’s Mike, a lank-haired stoner screw-up a la Jeff Spicoli working day shifts at a roadside mini mart in the town of Liman, West Virginia, a patch of cultural scorched earth which offers nothing to do and nowhere to go. He resides with his lank-haired beau, Phoebe, who is beautifully played by Kristen Stewart. She is the brains of the outfit, aware but accepting of both Mike’s blundering ways and his bizarre meltdowns which occur whenever he tries to leave Liman.

Mike goes about his life with a two-bit wedding ring stashed in the pocket of his skinny jeans, waiting for that perfect moment to pop the question to Phoebe. This film is the story of how Mike summons up those special words from deep down in his gut, a tumultuous 24-hour period of frolics, fireworks and fisticuffs where the pair learn a lot about one another, and not all of it positive.

Aside from mild domestic spats, the armour-plated elephant in the room is the fact that Mike is, in fact, a deprogrammed CIA super assassin (stay with this…) who has randomly made it to the top of someone’s shit list. The only way he can survive imminent death is if his ex-minder comes and re-programmes him so he can defend himself against the grenades, gas attacks and drone strikes.

Director Nima Nourizadeh, the evil soul behind 2012 film maudit, Project X, plays larkish, comic book material as straight as a poisoned, flaming arrow. Climactic coda aside, both Eisenberg and Stewart play the film as a romantic melodrama, and even in scenes of functional exposition, there’s a sincerity that’s palpably present, if not always visible. Some have compared the film to The Bourne Identity meets Still Smokin’, but a closer touchstone would be Hitchcock’s ’50s chase comedies such as The Man Who Knew Too Much and North By Northwest.

Yet this is no family movie, as Nourizadeh and screenwriter Max Landis mesh together scenes of winsome puppy love and twentysomething introspection with claw-hammer executions and close-quarters shotgun blasts to the chest. The ultraviolence is played in quote marks, aware of its own glossy absurdity particularly in the sequence where an ticked-off Mike prances around a department store and dispatches goons with anything that comes to hand (tin cans, frozen hamburgers, etc).

Though grim violence and abject behaviour are central to American Ultra, Nourizadeh is clearly on the side of love, and as such he wants to make a beautiful, romantic film about a young couple overcoming a tough time in their relationship. The film’s best shot – and there are rather a few contenders for the title –  sees Mike and Phoebe simultaneously tasered by the police. The camera switches from a frontal eye-level view to a shot from above, and we see their comatose bodies flopped to the floor, the wires connected to the taser darts creating a giant cross/kiss on the floor. And it’s heartbreaking.

The film’s US reception was largely toxic.