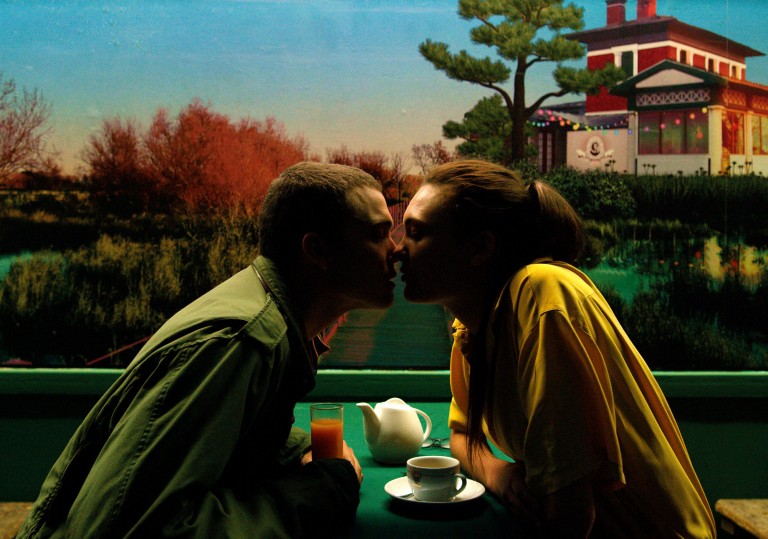 French cinema’s most notorious provocateur returns with an inevitable foray into the realm of 3D sex.

For better or worse, indulges in all the expected delights, but evinces a newfound sense of humour and humanity.

Surprisingly tender, Love finds Noé finally having a little fun at his own expense.

Director Gaspar Noé’s reputation has been built on what one might generously deem the less dignified aspects of the human condition. If the Argentine-born filmmaker is by this point a “name” in international cinema, it’s in the most literal sense, as a headline-generating, controversy-stoking star of his own conception.

Having already pushed the boundaries of violence, misogyny, and drug abuse (among other delightful subjects) in such purposefully provocative films as 1998’s I Stand Alone, 2002’s Irréversible and 2009’s Enter the Void, it makes a certain kind of sense that Noé would not only one day arrive at a full-blown sex flick, but at a full-blown 3D sex flick. In light of such considerations, that Love – née Gaspar Noé’s Love – fulfils all the titillating tenets of said genre is unsurprising; that it’s as simultaneously tender, touching, and even tasteful as its title implies is, for this filmmaker, the most shocking development of all.

To be clear, Love retains many of the stylistic hallmarks that make Noé’s filmmaking so frustrating; this time, however, these same gauche aesthetic flourishes are tempered by a genuine sense of humanity and, most importantly, a heretofore unacknowledged sense of humour. The seeming irony of Noé making a 3D porno called Love is lost on absolutely no one, least of all the director, who goes to great lengths to prove just how unironically he views this story. The narrative, therefore, is equal parts earnest and enervating, tracking in flashback the romantic and sexual passions of a young couple from the throes of a breakup to their early days as star-crossed lovers.

We watch (and watch) as Murphy (Karl Glusman) and Electra (Aomi Muyock) make love with numerous people, in a variety of places and positions, the pair enjoying the strength of their youthful libidos even as their emotional bonds appear to grow evermore tenuous. Later, when Murphy turns a ménage à trois with their neighbour, Omi (Klara Kristin), into an ongoing sexual liaison, his infidelity results in an unexpected pregnancy and ill-equipped foray into parenthood.

If the plot sounds like bad daytime television, it is so by design – everything about the film seems to speak in the most base vocabulary possible. The performers – Glusman a working actor in his first significant role; Muyock and Kristin non-actors plucked by the director from a night club – while committed, seem as if they were selected as much for their unpolished qualities as their willingness to engage in unsimulated sex. Their dialogue manages to transcend any language barriers by conveniently returning to the viewer to a universally pubescent perspective. Likewise, Noé’s manner of visualising the film is, by his standards, rather conventional, shooting most of the expository scenes in medium-length two-shots, and the sex scenes in either static set-ups or from overhead angles emphasising the intimacy of the proceedings. For better or worse, few of the familiarly garish sequences or elaborately choreographed tracking shots of Noé’s past work are in evidence here.

All of which begs the question of why Noé chose to shoot the film in 3D. His less demonstrative formal approach, coupled with the stereoscopic lensing, occasionally lends a pleasing depth to the image, exploited most expertly in a neon-lit club sequence and a number of near-hallucinatory scenes set outside the confines of the bedroom. But otherwise the technology does little to deepen the sensory effect of watching these actors’ bodies communicate and commingle in uninhibited displays of eroticism.

It may simply have been the most obvious way to subvert expectations, which, thankfully, Noé only rarely gives into – most memorably with an inevitable “shot” pointed right in the face of the audience – instead opting to stress the film’s almost playfully self-conscious demeanour. The posters of controversial films (Salò, The Birth of a Nation) decorating Murphy’s bedroom walls, for example, are downright subtle compared to when he and Omi decide to name their newborn son (wait for it…) Gaspar. And if that’s not enough the director himself shows up as Electra’s sleazy ex-boyfriend, joining in on the fun with a silhouetted sex scene all of his own. Whether you find these flourishes indulgent or ingratiating will likely come down to your patience for Noé and his self-styled persona. At the very least it’s nice to see him finally having a little fun at his own expense.

French cinema’s most notorious provocateur returns with an inevitable foray into the realm of 3D sex.

For better or worse, indulges in all the expected delights, but evinces a newfound sense of humour and humanity.

Surprisingly tender, Love finds Noé finally having a little fun at his own expense.