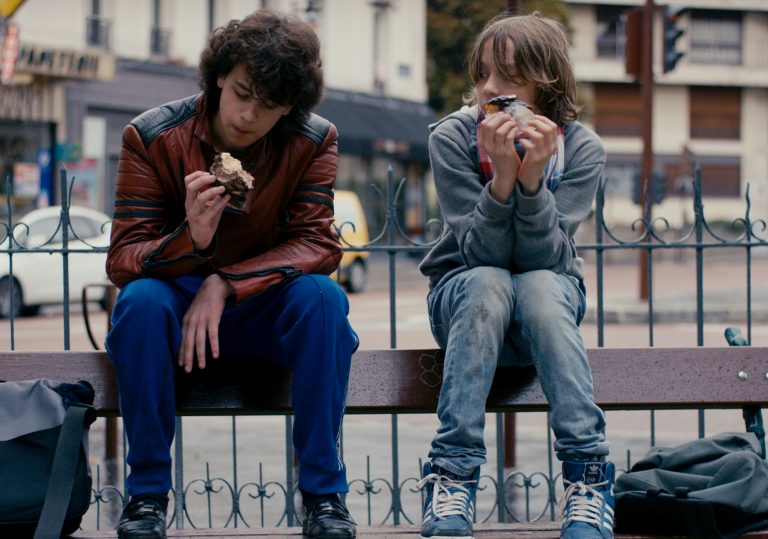 Michel Gondry has been all over the place of late. Some has been good, some less so.

A total charmer. Ramshackle, but entirely cohesive and purposeful filmmaking.

Fingers crossed that people seek this one out.

We’d say blink and you’ll miss the new film by Michel Gondry as it drops very briefly into UK cinemas, but there’s a high chance it’ll pass you by even if you had your eyelids propped open with matchsticks. And that’s a cryin’ shame, as it’s an extremely lovely movie which is wholly the product of the director’s whimsical imagination. But there are those instances where untethered creation can serve to set the story at a remove from the human characters – to make them components within an artificial construct. With this, Gondry has tried to imagine how creativity would genuinely manifest itself within the mind of a 14 year old.

With Microbe & Gasoline, Gondry tells a story set in his birthplace of Versailles in which he supplants himself in to the frontal lobes of his two teen heroes – Ange Dargent’s Daniel (aka Microbe, due to his diminutive stature) and Théophile Baquet’s Theo (aka Gasoline, due to his smell). The former is a budding artist with an eccentric family life and parents who appear to have drifted apart from one another. The later drifts into town wearing his red fake-leather biker jacket and blue trackie bottoms, while riding a mountain bike which he’s modified with loud-speaker and a sound effects board. It’s not long before the pair become fast friends.

Daniel pines for one of his female classmates who won’t give him a second glance, while Theo receives daily abuse from his parents, peers and just about anyone with whom he comes into contact. Yet, he’d built of sturdier stock and takes none of it to heart. And so they decide to do what anyone their age would in such a situation: they build a car in the shape of a house by using a reconditioned lawnmower engine and an old shed, and take to the French highways to locate a rural summer camp run by large breasted women from Theo’s youth.

Gondry tethers the boys’ creative tenacity to the bounds of reality, so their story seldom (if ever) strays beyond the credible. The film’s greatness derives less from the invention on show, and more for the moments of heartbreaking pathos regarding the pair’s uncertain future and the realisation that their journey is perhaps a cry for help and a symbol of their loneliness. It resembles Joe Dante’s wonderful Boy’s Own adventure flick, The Explorers, and well as the classic comedies of Abbott and Costello. The final shot, too, is immense and heartbreaking, on a dime it recontexualises the entire film that came before. Do seek this one out.

Michel Gondry has been all over the place of late. Some has been good, some less so.

A total charmer. Ramshackle, but entirely cohesive and purposeful filmmaking.

Fingers crossed that people seek this one out.