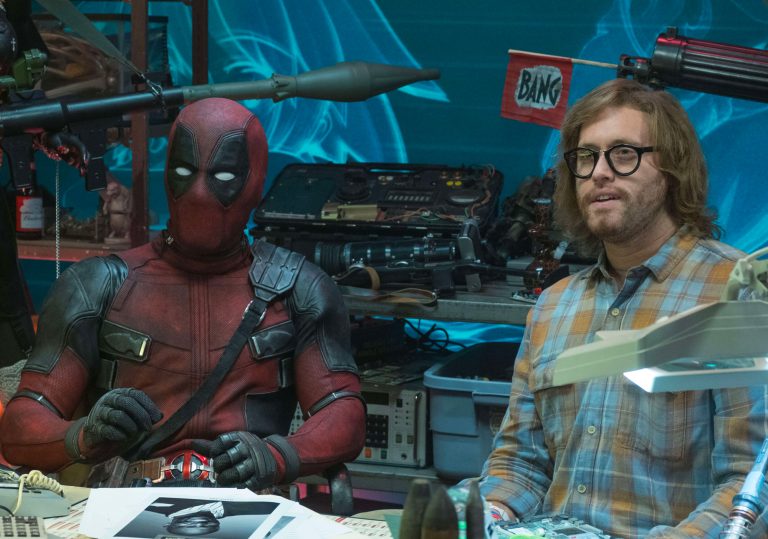 Bracing ourselves for the“edgy humour” and cartoon violence.

Like sitting next to your nine-year-old cousin at a family dinner who keeps yelling profanities for attention.

Wants so badly to be something more interesting than it really is.

Perhaps there’s something refreshing about the way in which the latest instalment in the burgeoning Deadpool franchise doesn’t even put up a half-hearted attempt to pretend it’s different from its predecessor. Five minutes or so into the film, the official Deadpool anthem, DMX’s ‘X Gon’ Give It To Ya’, starts to play, and with it comes the suggestion – or perhaps admission – that what we’re about to witness is more of the same juvenile schtick which made its 2016 origin story a box office smash.

A hyperviolent montage set to Dolly Parton’s ‘9 to 5’ opens proceedings in exactly the same way Juice Newton’s ‘Angel of the Morning’ kicked off Deadpool OG, which implies there’s been zero progression between the start of that film and this one. Business as usual for the merc with a mouth – until a job goes bad and he’s swept up in a crazy scheme involving a 13-year-old boy called Russell (played by Hunt for the Wilderpeople‘s endlessly charming Julian Dennison) and a grumpy super soldier from the future by the name of Cable (Josh Brolin, in his second Marvel baddie outing of 2018).

But Deadpool isn’t alone – he’s joined by returning X-Men heroes Negasonic Teenage Warhead and Colossus, and a host of new pals, including the much-hyped Domino, played by the luminous Zazie Beetz, who manages to effortlessly become the film’s highlight. Not that there’s much competition for that title.

For a film which makes a big deal out of being zany and unpredictable, everything’s very much paint-by-numbers – even the gross-out SFX and bloody fight sequences. Like the kid at school who’s desperate for attention, the motormouthed Deadpool riffs away on the likes of institutionalised child abuse, Batman v Superman (no target is too easy!) and remains curiously obsessed with anal sex in the same way he was in the first movie. Given that Deadpool is a canonically pansexual character in the comic books from which he originated, this might make sense, if it weren’t for the fact that in this cinematic rendering, he’s so aggressively set up as a macho, #NoHomo hero.

In the same way that Deadpool 2 retreads the supposedly subversive ground of its predecessor, it suffers from the same key problem: it’s hard to invest in any sort of emotional beats in the story when the film itself is a mockery of the very notion of emotions full stop. It mocks its superhero stablemates, chiefly James Mangold’s Logan (even using a musical cue from the film), but in an attempt to have its cake and eat it, still expects audiences to care about the feelings and motivations of its characters.

Where Logan earned this emotional resonance through reverence of its characters and a certain earnestness, Deadpool 2 attempts nihilism with heart and trips over itself in attempts to be edgy. But this is 2018 – we live in the age of incels and flat-earthers, of memes about memes and political scandal as political norm. A film like Deadpool 2 has no cultural currency anymore. Even the presence of TJ Miller – accused of sexual assault and confirmed bomb hoax arsehole – makes complete sense in a film as tragically banal as this. It mocks the likes of Logan and Avengers, but yearns to be talked about in the same sentence without putting in the hard graft which has earned those films more praise.

Which brings us to the big question: why do we watch movies? To be moved? To be entertained? To find something out about ourselves that we didn’t know before we entered the cinema? Certainly there’s nothing moving about watching Ryan Reynolds ham it up under his red mask, nor much entertaining about Deadpool 2 unless you’re a sex-obsessed teenage boy or someone who still finds gay jokes funny. All that Deadpool 2 teaches us is that studios will cash in on anything they can, and that cinematic junk food – cheap and disposable, aimed at those looking for a sugar high and ease of consumption – lives on.

Bracing ourselves for the“edgy humour” and cartoon violence.

Like sitting next to your nine-year-old cousin at a family dinner who keeps yelling profanities for attention.

Wants so badly to be something more interesting than it really is.