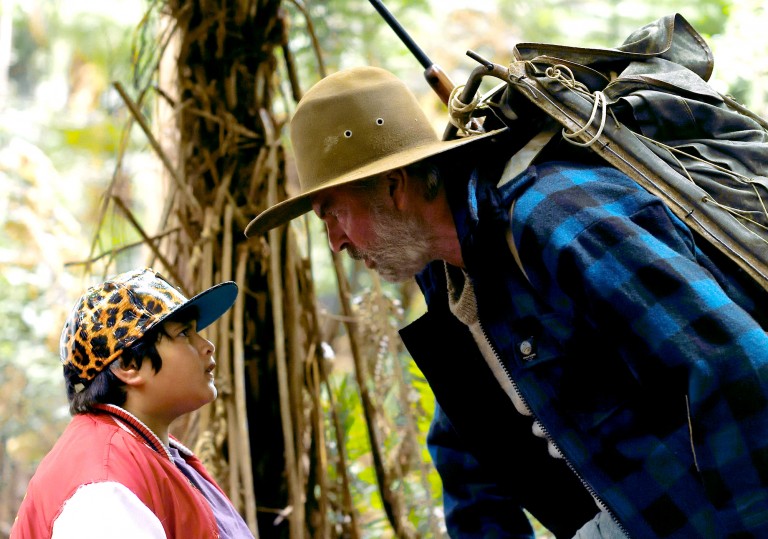 Loved What We Do in the Shadows.

Before his death in 1996, Barry Crump had written 24 semi-autobiographical comic novels drawn from a life spent chiefly in the New Zealand bush. Now, Taika Waititi, the director of 2007’s Eagle Vs Shark and 2010’s Boy, has adapted one of those novels, ‘Wild Pork and Watercress’, for the big screen. The results are a charming merger of the literary and the cinematic.

Hunt for the Wilderpeople tells the story of 10-year-old Maori orphan Ricky Baker (Julian Dennison) who, following the sudden death of his loving Auntie Bella Faulkner (Rima Te Wiata), goes on the run with his Uncle Hec (Sam Neill), a gruff, grumpy bushman now suspected of abduction and perversion. This episodic, picaresque tale is formally divided, like Crump’s novel, into 11 numbered and headed chapters. Within this decidedly bookish frame, books and reading play a key part. Hec’s illiteracy and disdain for even the spoken word are offset by Ricky’s love of books and his chatterbox tendencies.

The film’s title derives from an article on Wildebeest that Ricky peruses in a hut where the two fugitives briefly stop. At night, by the campfire, Ricky reads books aloud to Hec, gradually teaching him to love written stories. Hec then teaches Ricky “the knack” of bush survival and self-sufficiency. It is a decidedly literary landscape.

Yet from the opening aerial spectacle of the North Island’s vast forested mountains, Hunt for the Wilderpeople is also highly cinematic. Not only does it race through a variety of recognisable screen genres (Boy’s Own adventure, buddy movie, coming-of-age, the western, police chase flick), but there are also explicit post-Crumpian allusions to such diverse films as Crocodile Dundee, Psycho, Rambo, Transformers, The Terminator, Scarface and Lord of the Rings – with only the latter having any obvious New Zealand connections.

Ricky fancies himself a hip-hop gangsta (and names his pet dog Tupac), while social worker Paula (Rachel House) insistently and absurdly appropriates the tough-guy mannerisms of Hollywood’s cops and even Marines. Yet while these characters seek to define themselves by all-American models, their quest for identity – a stock theme in rite of passage stories – will take them deep into the hinterlands of Te Urewera. From this there will emerge a film as uniquely indigenous as the supposedly extinct huia bird that Ricky and Hec rediscover in a “majestical” spot.

Hunt for the Wilderpeople is a fun, funny family yarn. Waititi himself cameos as a local church minister preaching the ‘tricky’ ways of Jesus, while Rhys Darby, after stealing the show as deputy cultural attaché/band manager Murray Hewitt in TV’s Flight of the Conchords, and as werewolf ‘alpha dog’ Anton in Waititi’s own What We Do in the Shadows, does it again here as loner conspiracy theorist ‘Psycho’ Sam. There may be an inevitability to the way in which Hec and Ricky, for all their differences and dysfunction, eventually grow together, but a rich seam of subversive humour stops the sentiment becoming too treacly.

Loved What We Do in the Shadows.