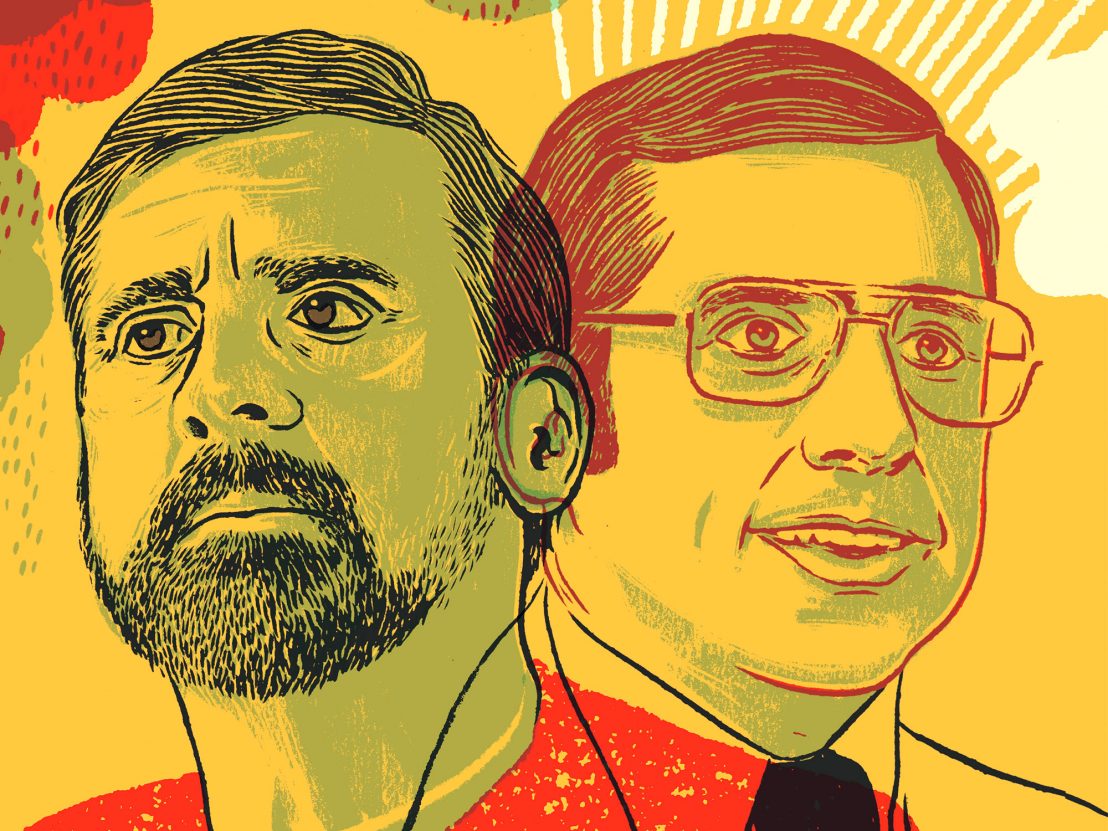 Steve Carell: ‘I don’t think about comedy and drama as separate genres’

From office buffoon to father of a teenage drug addict, the American actor is a veritable screen all-rounder.

“I’ll be honest – I was a dull kid,” Steve Carell grins. “I wouldn’t say I was straight-laced, but I wasn’t a party guy. I played a lot of sports, I was in school plays, I was on the student council, I was on the social committee.”

When you meet him, this all makes perfect sense. He’s disarmingly warm, and has a cackle of a laugh that fills every corner of the hotel room in Mayfair we’re sitting in. Of course he was on the social committee and the school council. Steve Carell is that guy. I tell him that the much-maligned 2010 remake of Dinner for Schmucks is one of my mum’s favourite films, and he laughs – not politely, but sincerely. It’s the same laugh I grew up hearing when I watched him in The Office.

“Dinner for Schmucks was a fun one,” he sighs. “A critic actually told me the other day that they really loved Seeking a Friend for the End of the World,” he says, as if he’s genuinely surprised. “It’s so subjective what might be appealing to people or what might strike a chord in someone.” The common factor is, of course, Carell. He’s charismatic but entirely without pretence, enthusing about how excited he was to meet Laura Dern, “Oh, you’ve gotta meet her!” There’s something pleasingly normal but undeniably compelling about him, and it comes from a full-bodied commitment to his craft.

As an alumni of Chicago improv comedy troupe The Second City (whose graduates also include Tina Fey, Amy Poehler and Jon Favreau), Carell cut his teeth as hapless paper salesman Michael Scott in the US iteration of The Office, but it was playing dimwitted weatherman Brick Tamland in Anchorman that introduced him to Judd Apatow. Together the pair developed The 40-Year-Old Virgin, which became Apatow’s directorial debut and Carell’s first leading role.

His knack for timing and improvisation ensured the foundations for a career in comedy were quickly laid – with his wide eyes and voice capable of oscillating from deep and booming to high-pitched hysteria, it’s not hard to understand why audiences were drawn to him as a funny man. He became known as part of the “Frat Pack”, alongside co-stars such as Will Ferrell, Paul Rudd and Seth Rogen, but demonstrated a talent for more than witty one-liners and knowing glances to camera in 2006 when he won the role of suicidal Proust scholar Frank Ginsburg in Jonathan Dayton and Valerie Faris’ Little Miss Sunshine.

The part was originally written with Bill Murray in mind, and the studio were keen to cast Robin Williams, but Carell – a relative unknown with little film experience – took it in the end. “I loved that script,” he beams. “I was super excited to get that role – I was so hopeful about what that film could be.” The film, as it happens, was a bittersweet tale of human failure and familial farce, with Frank as the antithesis of the good-natured losers Carell had become associated with in his comedic work – an introspective, deeply thoughtful and deeply troubled individual.

“I don’t really think about comedy and drama as separate genres,” Carell muses as he sips his coffee. “Ultimately I prepare for them in the same way – it’s all about trying to make it as truthful as you can. A character in a comedy doesn’t know that they’re in a comedy, and the same goes for drama. You don’t act a drama as if you’re in a drama – it’s just life, it’s just what’s happening.” This is perhaps most evident in Beautiful Boy. Based on the memoirs of journalist David Sheff and his son Nic, the film chronicles the turbulent relationship between the pair as Nic struggles with methamphetamine addiction, and David with the burden this places upon him as a father.

For Carell, who has two teenagers of his own, there was an obvious connection. “Being a dad changed me,” he explains. “That instantly became the most important thing I did and will ever do – it gave context to every other part of my life, and I think I’m a good dad. I’m sure I’ve made mistakes, but I’m trying my best.” 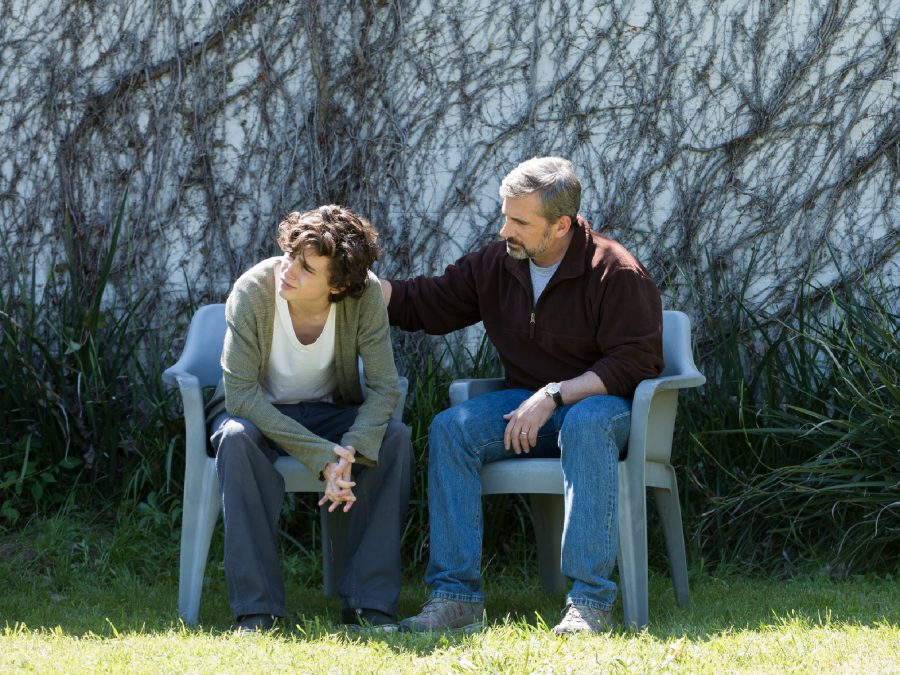 Carell has played fathers – and father figures – throughout his career, and Beautiful Boy feels like a logical next step after Richard Linklater’s Last Flag Flying, in which Carell plays a Vietnam veteran whose only son is killed in Iraq. Quietly devastated, Larry “Doc” Shepherd reunites with his old platoon buddies in order to bring his son’s body home.

Both films wrestle with the difficulty of parent-child relationships, and the devastating notion of losing a loved one to forces beyond your control. In Linklater’s film, Carell played Doc as a gentle, retiring sort, occasionally prone to giggle fits, yet unabashedly emotional when finally overwhelmed by his grief.

David Sheff is a different beast, having made his name as a pop culture journalist who interviewed John Lennon and once wrote a book decrying the evils of Nintendo. Carell’s vision of David sees him hellbent on understanding his son’s addiction in order to combat it. The only way he feels able to do this is by approaching it with a journalist’s rugged interrogation techniques, leading him to snoop on his son’s diary and even snort cocaine in attempts to understand what Nic is going through.

Nic is captured with desperate vulnerability by Timotheé Chalamet, whose star has been on the ascent since his performance in Call Me by Your Name. “He’s a good egg,” Carell nods. “I’m in awe of Timmy – to be such a supremely talented guy, but also a sweet, sweet person. One of the first scenes we shot together was eight minutes long, in its entirety. It was interesting to do that so early – so much of their story is contained in that one scene. They’re not connecting, but they’re trying to. That love and appreciation comes through, but they just cannot understand each other.”

This failure to communicate gets at what makes Beautiful Boy feels like a natural fit for Carell. In his hands, David is a flawed, often frustrating, hopelessly real person. Carell has played a lot of those over the years, from Foxcatcher to The Big Short, and each has come with its own unique set of challenges. “There’s less left to the invention of the character,” he muses. “There’s a responsibility that comes with it too, because you want to do their story justice and you don’t want to be cavalier about how you’re portraying another real person.”

Presumably it’s easier to feel that way about David Sheff than Donald Rumsfeld (who Carell plays in Adam McKay’s upcoming Vice) but there’s some commonality between all Carell’s characters: like a precision-engineered laser, he seeks to find what’s most human about them, and focus in on that. The same goes for Gru in hellish CGI mainstay Despicable Me as goes for professional chauvinist Bobby Riggs in Battle of the Sexes – Carell’s off-screen affability translates into a sort of cinematic nobility.

Even in his darkest role to date, as the deeply disturbed multimillionaire John du Pont in Foxcatcher, Carell – unrecognisable in prosthetics, affecting a nasal twang to his voice – found the most vulnerable elements of his character, getting under his skin to expose something devastating lurking beneath. Similar vulnerabilities are on display in Beautiful Boy, but it would be remiss to describe the film as pure melodrama. Instead it explores the fraughtness of the central father-son dynamic, and highlights that dark and light often live side by side in our lives.

In an early scene, a flashback sees Carell laugh as Jack Dylan Grazer (playing Nic Sheff at 12 years old) rocks out to Nirvana’s ‘Territorial Pissings’ in the car. Cut to the present, where David drives around their neighbourhood in the pouring rain, frantically searching for his missing son. Everything for David and Nic comes down to these highs and lows, and Carell is appropriately philosophical about it.

“In real life, everyone’s been to funerals that have laughter and have joy, right? Even within the darkest moments, there are brief glimpses of brightness and light. That’s how human beings cope with the dark times. You have to try and get yourself through it somehow,” he smiles. I tell him I’m inclined to agree. 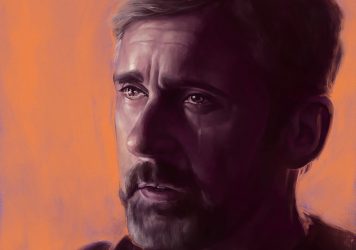 Check out the winning entries from our Beautiful Boy creative brief

We were blown away by the excellent entries for our latest competition. 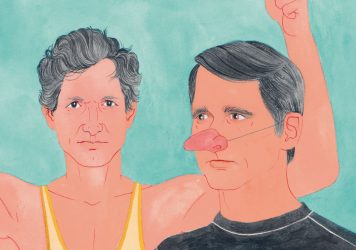