This still might be the greatest tennis movie ever made.

This is a film about trolling. It could be, pending deeper research by vast armies of social historians, a film about the first and most high profile example of trolling, or to use non-digital terminology, an altercation that’s not quite provocation and not quite harassment. Bobby Riggs was a jocular Grand Slam tennis champion during the 1940s who, by the 1960s, had become a beloved mainstay on the senior circuit.

Life after relative sports stardom didn’t quite happen for him, but the thrill of the court remained. It’s hard to tell from Jonathan Dayton and Valerie Faris’ glossy feature, Battle of the Sexes, whether Riggs, in his twilight years, was motivated by fame, a fear of falling from the limelight, or maybe just a love of the game. But something certainly drove him to lay down one hell of a thorny wager.

At a time when heinous gender inequality within the ranks of professional tennis was an accepted norm, Riggs had the temerity to propose a crackpot theory which suggested that a woman could never beat him (a man) on the court due to a natural genetic superiority. As played by Steve Carell, Riggs is every bit the garrulous jester who tailgates the tides of sexual politics and women’s lib to his short term economic advantage. The media slavishly lap up his ploy. What he does is proto-trolling, plain and simple: he makes a brash, offensive statement which has no basis in reality, and laughs all the way to the bank as rivals clamber in outrage to prove him wrong.

This led, in 1973, to the eponymous ‘Battle of the Sexes’, a high profile exhibition match at the Huston Aerodrome for which Riggs went up against Billie Jean King – essayed here through a sparky performance from Emma Stone. The film follows the two protagonists as they prepare themselves for the must-win contest, Riggs with hardcore conservative male chauvinism behind him, and King with women, enlightened liberals and just about everyone else.

What’s interesting about the film is how it explores the grim reality of Riggs’ terrible proposition. While he clearly saw it as a wind up, many took his words at face value and became empowered by his bigotry. In grudgingly accepting his challenge, King knew that she had to win or these male idiots within the tennis bureaucracy would co-opt the showdown as a rigorous social study and it would justify their decisions to, say, pay women much less than men. Sound familiar?

Yes, it’s a film that chimes very nicely with these crazy times, and it’s just a cryin’ shame that the direction and script (from Simon Beaufoy) are about as vanilla as they come. Behind the scenes, King struggles with her sexuality, gravitating away from her doting husband Larry (Austin Stowell) and towards bombshell salon stylist Marilyn (Andrea Riseborough), and though the actors bring an emotional charge to their roles, there’s little in the way of actual drama.

Yet this is a rare case of a sports movie that’s actually about something more than the personalities on show. It’s light and fun in the moment, but works far better as an alternative reality fantasy to the jerkoff-riddled hellscape we’re experiencing now.

This still might be the greatest tennis movie ever made. 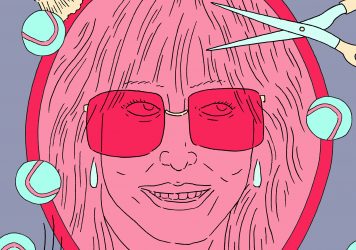