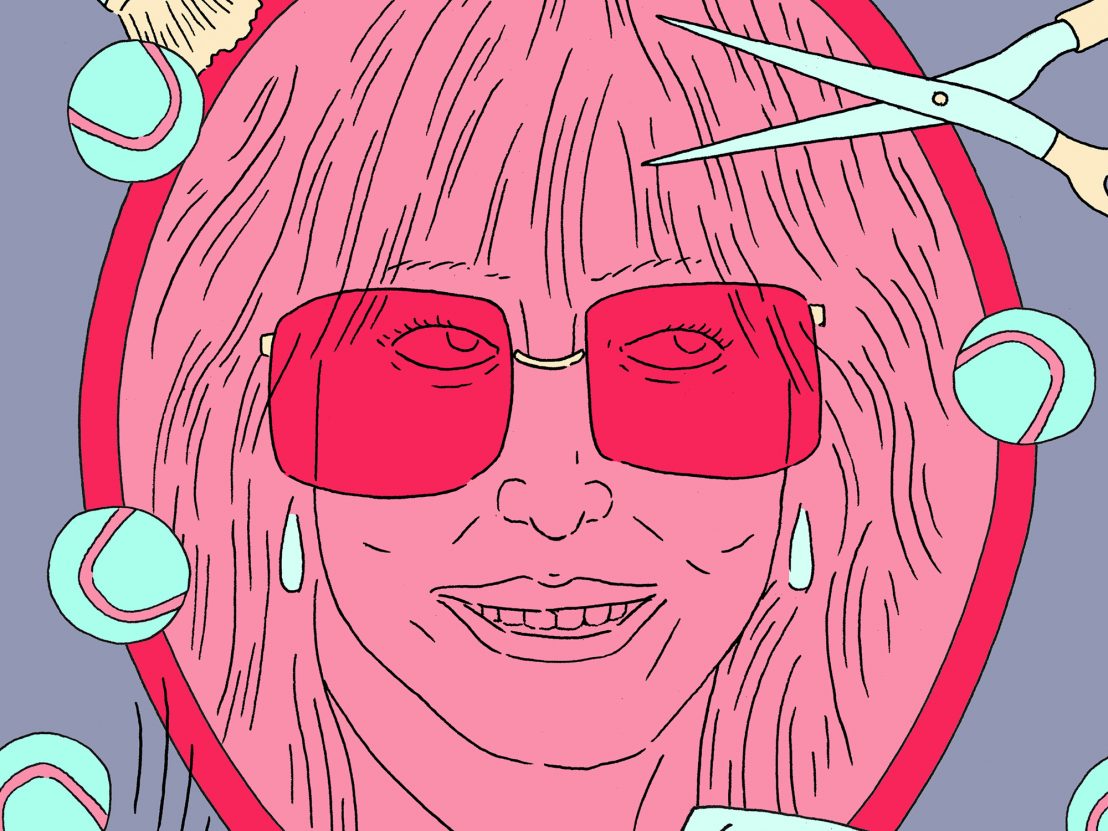 Meeting Andrea Riseborough, it’s hard not to be surprised and slightly envious of her style: her leather skirt, tank top and short blonde cut are completely at odds with the ’70s long-haired hippie she plays in Battle of the Sexes, but she wears both styles with the same natural confidence. “I’m just really interested in physicality and exploring. I have very little interest in playing myself, I do that quite well, I do it everyday. Yeah, god! That would just be really boring for me.”

As Marilyn in the new film from Little Miss Sunshine directing duo Jonathan Dayton and Valerie Faris, Riseborough is playful, soft-spoken and sensual, which catches the attention of Billie Jean King, the famous feminist tennis player interpreted by Emma Stone. Despite the still fierce misogyny of 1970s America and the taboo around female homosexuality, Marilyn is liberated and helps BJK accept herself. “[We wanted] to focus on that scintillating effervescence when you’re falling in love, and it’s forbidden in a sense but still happening. It’s a really joyful period and it’s nice to play somebody who embodied the freedom of spirit of that time.”

Riseborough has played several real people before, but often at more difficult times in their lives. As the Iron Lady in Margaret Thatcher: The Long Walk to Finchley or controversial socialite Wallis Simpson in Madonna’s W.E., she’s had to feel their pain herself because to her, acting is not simply pretending. “I don’t know how to do it without feeling it, if that makes sense. Maybe [some] people can give the impression that they’re sad, and disconnect with it inside, [but] for me it really does affect me quite a lot. But I think that’s also, in a way, honouring the story.”

Her passion for acting feels raw, stemming directly from a profound interest in people and their stories. To prepare for Marilyn, she listened to music of the time, but also re-read Germaine Greer’s 1970 groundbreaking feminist book ‘The Female Eunuch’. “[It was] hugely helpful because it smashes down any sort of received gender stereotype that we feel we have to fulfil as women, and I wanted Marilyn to embody that change. I think the real Marilyn did.”

Riseborough also sees acting as an opportunity to educate herself, and others. “It’s something that I like about my job, you can almost thoroughly imagine what it was like to be in a time and everything is setup to enhance that. It really gives you a lot of perspective on life, you get to learn about so many things, like Billie Jean King.” She finds it “criminal” that she had to be in this film to learn more about this story. “I knew about her in adult life, but […] there were so many events that formed the still long struggle to come to get equal pay, and that was a really important one that was completely negated in my education.”

She isn’t afraid of calling out the hypocrisy of the acting industry. “A quote [for an actress] can never be as high as a guy’s because films just aren’t about women in the same way as they are about men. So they have a higher quote than us, we cannot be paid equally and that’s everybody’s excuse.” She blames this backwardness in the film industry on a lack of education, which she hasn’t found in theatre. “The great thing about theatre is, you enter the rehearsal room, there’s a bunch of liberals, you know they’re all talking about what Thai massage they got, which exciting book they read, and you don’t feel like an underdog as a woman.” Working in film was confusing for her at first. “You’d be at the end of a scene and they’d tell you to go home because they could use somebody else’s body from behind because your body wasn’t the right shape.”

She continues, “I get on a film set and I brace myself to be patronised. And also make lots of friends.” This enthusiasm for teamwork explains the diversity of her filmography, from the Oscar-winning production Birdman to the small British comedy Mindhorn. “[Birdman] felt so strangely important as we were doing it because we had no idea whether it was going to fucking work or not […]. Each piece was put together like a dance.” She easily navigates between genres and sizes of production because for her, success depends on collaboration. Her involvement in Mindhorn “happened a bit last minute” because she simply wanted to work with Steve Coogan and Julian Barratt.

She cares as much about her characters as she does about the people she works with. “I have no interest in working with misogynists, small-minded people, people who are going to drag us kicking and screaming back to the 16th century – that includes women.” Despite general improvements, she doesn’t see much progress in how cinema portrays women. “We used to have Bette Davis and Katharine Hepburn. Many of the most powerful actors in Hollywood were women. Now we have horrible franchises, like Transformers and The Fast and the Furious, which I think really perpetuate negative images.”

Telling Billie Jean King’s story goes against those tendencies. “Her message is inclusion rather than separation, which is really admirable. And you have to be a really strong, courageous person, to go through so many struggles just to make bread and butter, which you are deserving of. It’s difficult not to be bitter, and you feel unseen and unheard as a woman.” Riseborough understands that rampant misogyny makes it difficult for women to ask for more. “It creates a feeling of deep inadequacy in women and just a desperation to get any job, any sort of piece of opportunity to get on the front cover of Women’s Health.” But she herself has other goals. “I really want to work with artists and I like weird stuff. I’m a bit of a weirdo, I like other weirdos! Well, it’s just my taste.”