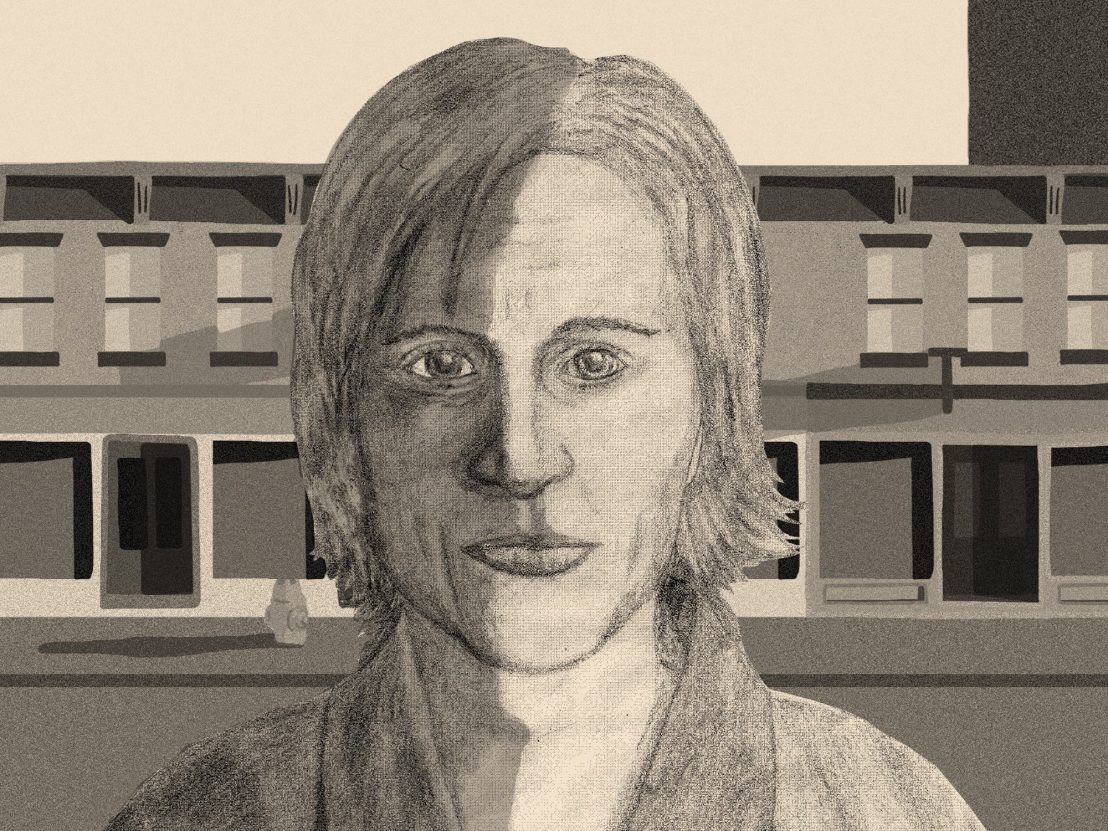 Kelly Reichardt is a filmmaker for whom the mechanics of a character’s daily existence are as important as anything that could be termed ‘plot’. “We drop in with them,” she says, “we get a little glimpse of their life for a small period of time, and then they move on – there’s not a lot of wrapping up. Certain Women is a little more wrapped up. I’ve had DVDs sent back to me from Meek’s Cutoff that say, ‘We didn’t get the ending.’” Reichardt laughs, inviting us to join in. It’s hard not to be charmed by her warmth – emotionally and literally, as she is swaddled up in a huge blanket, like a child recovering from a fall in an icy lake.

The minutiae she presents of her character’s lives are the cream of long and attentive study sessions spent in carefully-scouted rural locations. To give credence to the third story in Certain Women, Reichardt spent four months shadowing the owner of the horse ranch in Montana featured in the film. Reflecting on that experience, she reveals something of her obsessive attention to detail: “Each horse and each corral seemed incredibly important, but my assistant director kept saying, ‘It’s just horses and hay. All anyone’s ever going to see is horses and hay.’ Then you get into the editing room and you start cutting. I remember getting Todd Haynes in for a screening and he said, ‘Why does she keep feeding that one horse? How much can a horse eat?’ I said, ‘Todd! There’s 20 horses!’”

LWLies: Why is it important to you to get all these small details correct?

Reichardt: I like the Rififi way of going in and the film stops for 40 minutes while every detail of the break-in happens. It’s like watching Nanook of the North and thinking, ‘If I ever have to build an igloo, I’ve seen Nanook of the North and I can.’ I like watching people do labour, so the idea would be that someone who ranches would see the movie and it would make sense to them. You can feel sometimes, when someone has a job or a profession in a film… If there’s a phone and there’s a computer and they have a job, I want the details of what the job is.

Are you location scouting while you’re writing?

It depends who I’m writing with. With Jon Raymond, usually there’s a short story to begin with and he has a location in mind. With Old Joy I scouted for months at hot springs all across America and ended up shooting at the hot springs that he wrote the stories for in Oregon. Or in Wendy and Lucy, he wrote in the Walgreens parking lot that you can see out his window in Portland. I drove around 39 states, sitting in Walgreens parking lots and then, finally, wore myself down and ended up shooting in the parking lot that he wrote for.

But you get other information while you’re scouting. You run into things. You find things out by locations that aren’t right. For Meek’s Cutoff, I scouted Texas and Utah and Arizona, and then came back to Oregon. It’s a long kind of wearing yourself out and returning to a space, or something that lives with you and you keep going back to that space, and then you tighten the circle and it becomes based around the dam in Night Moves, or the farm in Night Moves, or the ranch in Certain Women, which was the hardest location.

Read our essential guide to the films of Kelly Reichardt

For Certain Women I scouted Oregon and Idaho and then Montana and back to Idaho and then back to Montana, and then where in Montana? Montana’s a huge state, so it’s a long process with a lot of information and then it brings information back to your script. Then you start to storyboard and sometimes the painter that I storyboard with goes on scouts with me. You’re collecting images, things that are references for light, or frames, or costumes, or production design. You’re working with all of these people for a long time, usually a production designer and a costume designer first.

Then when your DP comes on… I have a shooting scheme in my mind and on paper, and then I go to the locations with Chris [Blauvelt], and hopefully Chris makes all those frames sweeter and better and figures out how to light them. You might be sitting in the desert with a viewfinder for a really long time planning what your shot looks like, but until the day you shoot you’re not going to have a carriage, and oxen, and your actors there, so that’s going to change things. That’s a real process.

This whole laborious process, what does it mean to you? What urge are you trying to gratify with your filmmaking?

I’m gratifying the urge to get up and have something to do everyday that is interesting to me. It’s really just that. I want a project to work on that will lead me to travel places and get to know places that I wouldn’t otherwise know. It’ll send you in the direction of finding, studying painters that you didn’t know as deeply before, or reading stuff for inspiration or research and it turns you on to literature you might not have otherwise known, or photography. It gives you a path. Instead of going to the Louvre and being like, ‘I’ll look at everything,’ you go, ‘Oh, I’m going to go find the Bruegel.’ Then you go and you have a mission but you take in a lot along your way, a lot of things influence you along the way. I like to know, ‘This is what I’m doing,’ otherwise you wake up and it’s just emails and business or just the crap of life. The good things in life too! But it’s nice to have… Don’t you like to have a project to work on?

So much so. How do you cope in between things when you’re figuring out what to do next?

Well, I’m getting better at learning how to have time off, but I would rather know that I’m working on something, but maybe not feel like I have to move it along. Like, in the last decade I’ve made a lot of films because I had not been able to get a film made for the decade prior. And now that urgency is a little bit… I’m a little worn out. I still want to wake up and know that I have something to work on but I also want to go sit on a porch and hang out with my friends’ kids and just have some time when I’m not working when I can just think. But I still don’t want the wide-openness of nothing. That would drive me crazy. And I still teach.

You’ve basically reached a point in your career where you’ve earned a break?

I have earned a little break.

What is it about Michelle Williams that leads you to repeatedly want to collaborate with her?

I actually find acting a really mysterious thing, and how you work with each actor is so individual. Everybody is so different. You try to find what actors need and get what you want at the same time. But with Michelle, because I’ve worked with her so often, it’s just a sort of shortcut. She’s very trusting of me, which is the biggest gift you can get from an actor. Doesn’t mean she’s not thinking and making decisions, but I don’t have to elaborate so much. I’ll just be, ‘What don’t you like?’ We can just cut to it. So there’s that, the familiarity. She’s just easy. She’s an undemanding person and she’s game for this kind of filmmaking – which not everybody is. I’ve been really lucky with actors. They’re kind of an extension of the crew. They’re not off waiting to be called on set, they’re in it. Some actors really enjoy that and Michelle is one of those actors.

That changes over years. I grew up in Florida. Growing up in Miami in the ’70s, it was kind of a cultural void. So when I got to Boston and found the rep house and I took a class on Fassbinder, who I didn’t even know, at first it just blew my mind. It was so exciting and I consumed a huge amount of cinema in the next 20 years. Then, you know, I’ve been teaching film for 20 years now, and then making films. Those are all really different film experiences. I would say the years of purely loving to go to the movies to watch films from different places and different genres and periods of filmmaking, that, I wish I could get back to that. I can’t get back there because it’s hard for me not to take films apart when I’m watching them so it’s easier for me to not watch contemporary films. It’s still a great thing to get lost in a film. It’s just that filmmaking is not as carefree a thing as it once was.