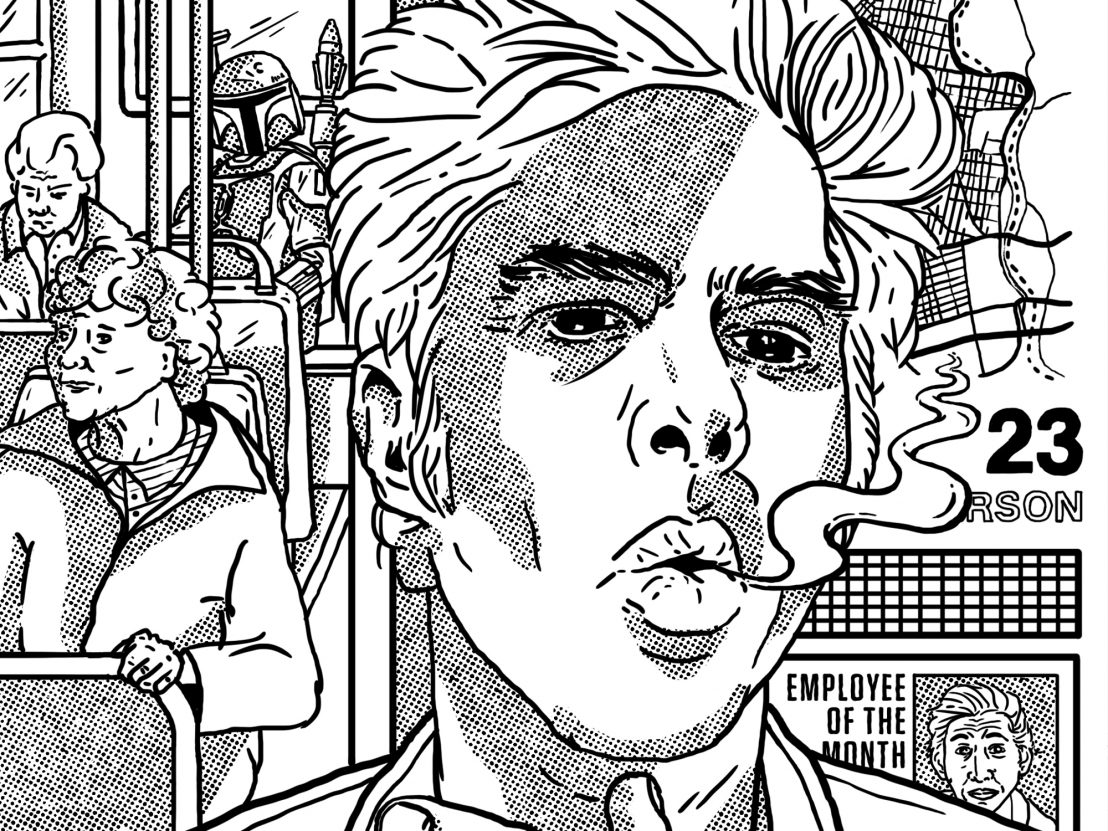 Jim Jarmusch, one of the leaders of the New York City DIY scene of the ’80s and one of the biggest names in independent filmmaking since then, has always placed moments of artistic appreciation in his films. Even his more genre-oriented movies, Ghost Dog or Dead Man, subvert expectations by allowing their protagonists to pick up more books than weapons.

Jarmusch’s cultural voracity hits its peak with both of his new movies this year. Gimme Danger – a doc about The Stooges that Jarmusch made as a gift to his friend Iggy Pop – is a deep dive into the band’s cultural history and influence, while Paterson uses the casual genius of William Carlos Williams as a frame to celebrate the creativity of a content bus driver (Adam Driver) and his wife (Golshifteh Farahani). Paterson depicts artistic engagement as a road to a fulfilling life, so we discussed Jarmusch’s creative process and how he feels about the cultural landscape now.

LWLies: Was it difficult to receive funding, or maybe just a home, for a low stakes film like Paterson?

Jarmusch: Well, it’s always getting harder and harder. And yet, I was very lucky to get K5 in Germany. That became world sales, and then we got Amazon. I got a little bit more from Le Pacte, whom I’ve worked with for years. So, it worked out. The business side is not so good for me, but we had the ability to do whatever we wanted to do. They had faith in us as filmmakers. They didn’t interfere with us in any way. It was good.

You’re mentioning all these studios. Are you noticing any changes in the industry from when you were starting out making independent films?

Do you think these changes are perhaps for the best?

I don’t want to trouble myself with thinking they’re bad, because they are. To preserve my sanity and ability to continue is to accept what is and do my best to make something that we’re happy to get out there. So, I can’t worry too much about it. But I’ve been lucky. Amazon and K5 have been great. They’ve been nice, respectful, and very pleasant.

This is your first electronic score. Was it exciting to step into that realm? I assume it’s a very complex and deep world.

Carter Logan – who was a producer on the film and has worked with me for years – and I are in a band together called SQÜRL. Along with our stage shows, we have been doing live scores to Man Ray’s surrealist films from the ’20s. We’re going to do more next year. We love doing that, and when we do that Carter plays drums, he has a way to trigger samples, and he has a synth. I have an electric guitar, an effects pedal and a synth. Fonzy (Affonso Gonçalves, the editor) said, ‘Look man, you and Carter have synths, why don’t you sketch a few things and just try.’ I was like, ‘In all my free time, Fonzy?’ He said ‘Well, just try something over the weekend’.

So we did, and it was working really well. So, over three weekends, using Garageband and a box of stuff, we created this. Now we’re going to put it on an album. I’m going to go away and expand and make the longer pieces work. Our only rule was no sequencing. I’m not against sequencing, but we didn’t want to let the synths play themselves; we’ll play them analogue. That was our only thing. Carter might have added in a little electric bass, and I’d put in an acoustic guitar and use wine glasses as glass violins. I mixed them way back because they really pierced through. But we just used those things.

It’s good to hear there’s some sort of connection between Man Ray and Paterson.

In a roundabout way. The coolest thing was when we performed a couple of nights to over a thousand people in New York at the Man Ray thing. After the second night a stoner guy came up to us and said, ‘Dude, it is so cool that Man Ray made videos for your music before you were born!’ We were like ‘Thank you. That’s our best compliment.’ We loved it. Paterson has this great affinity for creativity in people in traditionally non-creative careers.

There are no poets that were ever in it for the money. Nobody makes money being a poet. You scrounge, you have another job. Wallace Stevens was an insurance executive. Frank O’Hara was the curator for the Museum of Modern Art in New York. There’s a kind of purity of intent if you’re a poet. You’re not doing it for the money or the fame, you’re doing it because the form is strong and your hand is strong. I believe artists should make things that they would like. As soon as you start thinking about, ‘How will the world receive it?’ and ‘will I be famous?’, then you’re doing something else. That’s okay to do that, but I can’t do that. When we make films, we make something we would like to see. When Carter and I make music, we’re making something we would like to hear. If other people find it, then that’s great. If they don’t, we’re not going to change it so that they might. It’s not the way to approach it for me.

Have you seen much of Driver or Farahani’s films before shooting? What qualities of them did you think would work well as this really happy domestic couple?

I hadn’t seen much of either of them – just a little bit. I saw Adam do some small things in different films and I heard some interviews with him that were very impressive and made me want to meet him. I like his look, I like his approach to acting, I like his voice, and I like his rhythm. So on meeting him I was like, ‘Yeah, this guy is great.’ I first saw Golshifteh a long time ago in 2006 in a film called Half Moon – the Kurdish-Iranian film. Beautiful film. She was quite young when I saw her in that. I’ve seen her in a few other films since then. I just loved the idea of not making Laura an American actress. I thought, ‘I’m going to have trouble from K5 or Amazon when I say I want Golshifteh for a lead role. I have to tell them who I’m casting. They didn’t have the right to say no, but they had the right to say their opinion. Their opinion was ‘She’s fantastic. We love her.’ Amazon was like “She’s great. What a great idea.’ I wasn’t asking their permission, but that was a nice thing. I just love her, she’s fantastic.

Have you seen About Elly by Asghar Farhadi?

Do you think young creative types today have an outlet similar to something like punk in the 70s or the energy in New York in the ’80s? And are you seeing any creative modes for dissent?

Creativity and daring creativity are like weeds – you can’t stop them growing even if you wanted to. It has to do with wanting to say something, having inspiration and ignoring social media or the negative parts like, ‘How many likes do I get?’ Of course, there are people all over this planet. There are little gardens in filmmaking and music. You just have to find it, but certainly it’s out there. There’s a lot of great stuff going on, you just have to look for it.

Could you think of any specific people – maybe younger people – who could do this?

I find things. I just discovered a band from Canada called Nadja. It’s two drone musicians. I love a band from Chile called Föllakzoid. I don’t know if you know the electronic music of Ty Braxton. He’s ground-breaking – the future of fucking music. I love Dead Skeletons from Iceland. I love Blanck Mass with one of the guys from Fuck Buttons. There’s a lot of stuff. I love this guitarist Steve Gun. He played for a while with Kurt Vile. I like a psych band from the West Coast called Eternal Tapestry. I like these two girls called The Casket Girls. I like a lot of stuff. I like some more mainstream hip hop stuff. It’s not normally my taste but I think Kendrick Lamar is a fucking musical genius. I love Run the Jewels, but that’s not young, unknown stuff. There’s a lot out there. I could go home and make you a good list, but I can’t do it right off of my head.

Punk was about questioning authority and seeing energy. Do you think the form of drone music or the content of something like Run the Jewels are just as radical?

I think you can be radical even from a mainstream place like Kendrick Lamar, or from a very underground place. But it’s found in the people who aren’t looking for mainstream recognition. That’s the dilemma of it. True punk wasn’t trying to get mainstream FM airplay. They had something to say, and they fucking said it. That’s not dead, that spirit is there. It’s even more valuable now than ever.

Is there any advice you’d give to Jim Jarmusch of 1980?

No, I can’t even think that way.

Do you still keep up with your cohorts of that time? I’m curious specifically about Amos Poe.

Oh yeah, I keep in touch with a lot of my friends back then – Amos Poe and James Nares. I see lots of people. I just saw Lee Quinones, the master graffiti artist. I see Charlie Ahearn. I see a lot of people for sure still.