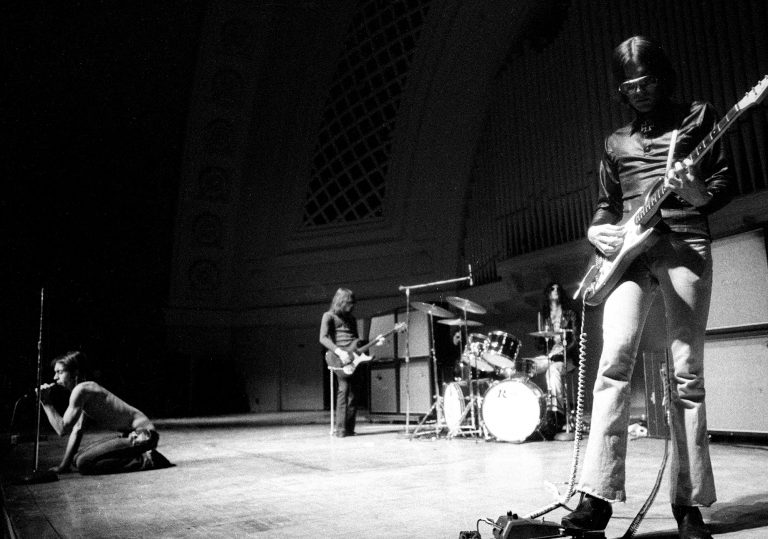 Very entertaining, but not especially probing.

Could do with more raw power of its own.

Jim Jarmusch directing a film about The Stooges is one of those perfect matches of artist and subject. Though the resultant documentary, Gimme Danger, is, at the very least, good, there’s the persistent sense throughout that something’s missing.

For one thing, anyone looking for recognisable idiosyncrasies of Jarmusch’s fiction work will be disappointed. Structurally, this is, for the most part, firmly in the talking heads and archive material mode, with stories largely delivered by James Osterberg (aka Iggy Pop) and still-living collaborators in a variety of workplace or homey backdrops. And the film sticks almost exclusively in adoration mode, positing The Stooges as the greatest rock and roll band right off the bat and rarely delving into more objective criticism of the group’s output, bar guitarist James Williamson lamenting the mixing of third album Raw Power.

There is some creative flair, however. When it comes to making things visually interesting, Jarmusch employs an Errol Morris-ish technique of using old film clips as means of humorous punctuation for anecdotes not covered in archive footage. Complementing this, there are also a few animated sequences of the band’s escapades as young men, with a look and style that’s almost akin to Terry Gilliam’s Monty Python work if it were spliced together with Beavis and Butthead.

The film is dedicated to four band members who have passed away, including drummer Scott Asheton, who is interviewed in the doc (including once alongside Iggy) but died in 2014 before its completion. His brother, fellow bandmate Ron, features heavily in archive interview form only, due to his passing in 2009. Considering the dwindling number of key figures to speak to, Jarmusch might have been tempted to make this an all-encompassing doc about Iggy, especially considering their previous collaborations with his fiction features, but there is a resolute commitment on his part to keep this solely about The Stooges.

Any brief discussion of solo output tends to be related to everyone outside of the frontman, while Iggy’s foray to Berlin with David Bowie in the late ’70s, which resulted in his two most famous solo albums, is amusingly retained as a throwaway comment. Nor will you find Iggy’s ’90s resurgence brought up with an expected clip of ‘Lust for Life’ scoring Ewan McGregor’s mad dash in Trainspotting. Interestingly, Todd Haynes’ Velvet Goldmine, which featured McGregor as an Iggy analogue, is directly attributed with sowing the seeds for the band’s early ’00s reunion, thanks to various non-Iggy members reconvening to rework some of their classic songs for the soundtrack.

Inevitably, though, Iggy’s survival means he’s the film’s anchor, and it’s his captivating storytelling, full of both articulate reminiscences and daft flights of deranged fancy, that helps to overlook the film’s overall lack of weight in light of the tragedies it tends to only flirt with rather than engage full-on.

Very entertaining, but not especially probing.

Could do with more raw power of its own.