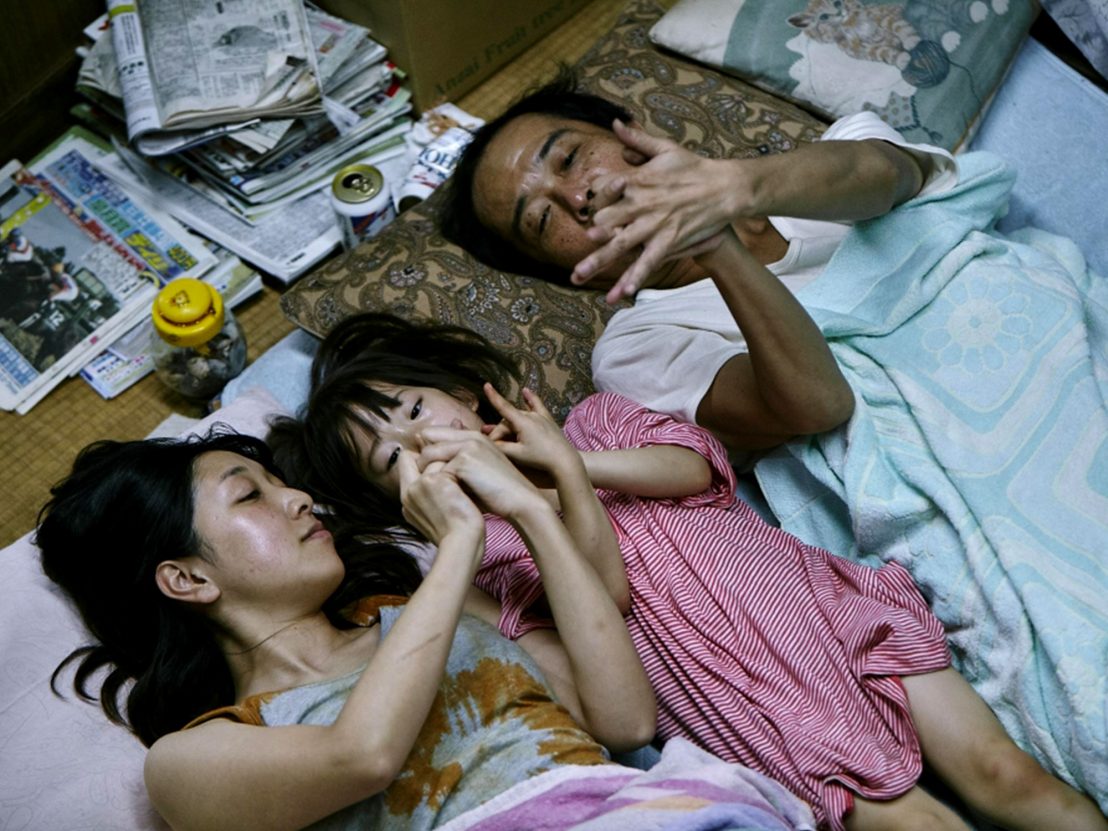 It takes about five minutes before the comforting twang of coffee-table acoustic jazz drifts from the soundtrack of Shoplifters, the latest from that Japanese manufacturer of cinematic comfort blankets, Hirokazu Koreeda. It’s become something of a signature for a director who has made the lilting, featherlight comedy-drama his stock in trade, and it works like gangbusters in expressing his languid, free-and-easy mode of storytelling. But a strange thing happens this time around, as the melodic fretwork suddenly gets blasted by an effects peddle and shifts from the major to the minor, but it’s only in the film’s final reels that we discover that this may have been a subtle harbinger of things to come.

The opening scene sees Koreeda regular leading man Lily Franky as mischievous patriarch Osamu who is joined by a young boy, Shota (Jyo Kairi), in nabbing supplies from a grocery store. They’ve got their methodology and hand signals down pat, and their heist comes off so cleanly that this is obviously an occupation more than a one-time scam. With spoils in hand and celebratory croquettes too, the pair see maudlin tot Yuri (Miyu Sasaki), sat alone on a balcony in the freezing cold.

With the same benign abandon that powers their shopping trips, they snatch her too, this time with a view to cheering her up, plying her with food and then swiftly returning her. But, when Yuri arrives home to meet the family, and it’s discovered that she’s been the victim of abuse, it’s decided that she stays. And it’s not kidnapping if the parents don’t ask for a ransom.

And so we follow the lives of this rag-tag crew as they scrape together a pittance from menial jobs and supplement their budget through a bit of light robbery. Although they all appear as a typical happy family who are content to muddle through the hard day in return for the gift of their cosy co-habitation, there are hints that the ties that bind are starting to fray. Osamu gently cajoles Shota into referring to him as “papa”, but despite their physical closeness, there’s a firm resistance which hints that all is not what it seems.

The title tells us point blank that this is a crime movie, and it is, but not in the way we initially imagine it to be. Koreeda uses this case study to deliver a broader point about the sad fact that we don’t have the ability to chose our own family. We get what we’re given. As one character says, “The only way to become a mother is to give birth” which reduces the act of life-giving to a cold process, one where love and responsibility are very much out of the equation. The film poses the question: what if we could reject those enforced natural relationships and build a new family unit built on more stern emotional foundations, even if doing so involves a teeny bit of lawbreaking?

It’s certainly in the upper echelons of the director’s back catalogue, even if there’s some noticeable straining to retain a sense of levity through the darker passages. It’s a little moralistic at times, and there’s also a sense that Koreeda loves his characters far too much to teach them a lesson or punish them in any way. But the intuitive ensemble work and the way he captures domestic scenes are as impressive as ever, and the cherry on top is another film-stealing turn from the great Kirin Kiki as – you guessed it – a kindly granny.

And yes, do have a hearty meal before you see this one, as this is a film where people eat and eat and eat, and when they’re done, they eat some more.