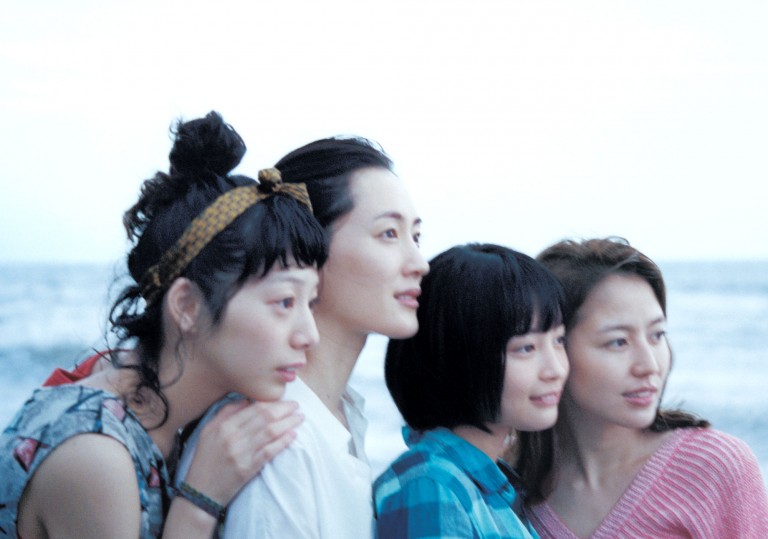 One of Japan’s finest filmmakers returns.

So delicate it sometimes threatens to evaporate in front of your eyes.

A film that whispers its message, which is nice sometimes.

Perhaps it’s just fortuitous timing, but this latest film by Japan’s Hirokazu Koreeda could be read as a call for empathy as Europe questions itself over what tabloid newspapers are so bullishly terming the “migrant crisis”.

The story told in Our Little Sister has no literal connection to this real geopolitical event, nor does it contain any direct commentary on it. Yet, in whisking up a subtle drama about the surprise and enrichment that can come from accepting an outsider into a closed family, it happens to be one of those films that has cropped up in the right place and at the right time.

Three sisters make their way across the country to attend the funeral of their estranged father. He chose to shack up with another woman and bore another daughter – the sprightly yet demure teenager Suzu (Suzu Hirose) – with whom the sisters have no real kinship. Though brisk and even a little awkward, the service offers enough time for a connection to form between Suzu and the sisters, and when Suzu’s comically ostentatious grande dame mother enters the equation, their ensuing union is cemented.

From this set-up, there’s little in terms of a narrative sweep. Instead, Koreeda simply gathers up pertinent details and allows each character to blossom naturally. The situation is the story, and the process of how these women live with one another is the source of the film’s compassion and tranquil humour.

Though Suzu is physically the youngest of this feisty coven, her somewhat sheltered upbringing has allowed her to become wise to certain household quandaries, and her purity means that she’s a dab hand when it comes to helping her sisters with their various romantic and professional foibles. Light bickering often takes over, but only as a way to consolidate the sisters’ essential camaraderie and mutual love for one another.

Though the film never hits any pointedly dark notes, an undercurrent of sorrow remains discernible throughout, particularly as Suzu takes to analysing the fragility of her current state of happiness. Having been wholeheartedly accepted into this divine sisterhood, she fears that her newfound contentment is transitory – that it may come to a bitter end. Guilt regarding her father’s romantic inclinations begins to manifest, and the film takes on a new, emotionally complex dimension. Not content with basking in the joy of domestic harmony, Koreeda explores the nature of family ties, and asks whether it’s possible to predict how the actions of one person can directly effect the life-path of another.

It’s become something of a cliché to compare Koreeda to Japanese maestro, Yasujiro Ozu, a director who dedicated a life’s work to untangling the emotional knots formed by life inside and outside of a family. And though Our Little Sister lacks the breathtaking rigour of the typical Ozu picture, the resemblance in aura of their work feels more than superficial. Not least because Koreeda seems to be setting into a grove of intimate family dramas, following his sublime Still Walking from 2008, and the sentimental adoption mix-up comedy from 2013, Like Father, Like Son. This new film is about acceptance, responsibility and how families should always be ready to make room for one more.

One of Japan’s finest filmmakers returns.

So delicate it sometimes threatens to evaporate in front of your eyes.

A film that whispers its message, which is nice sometimes.