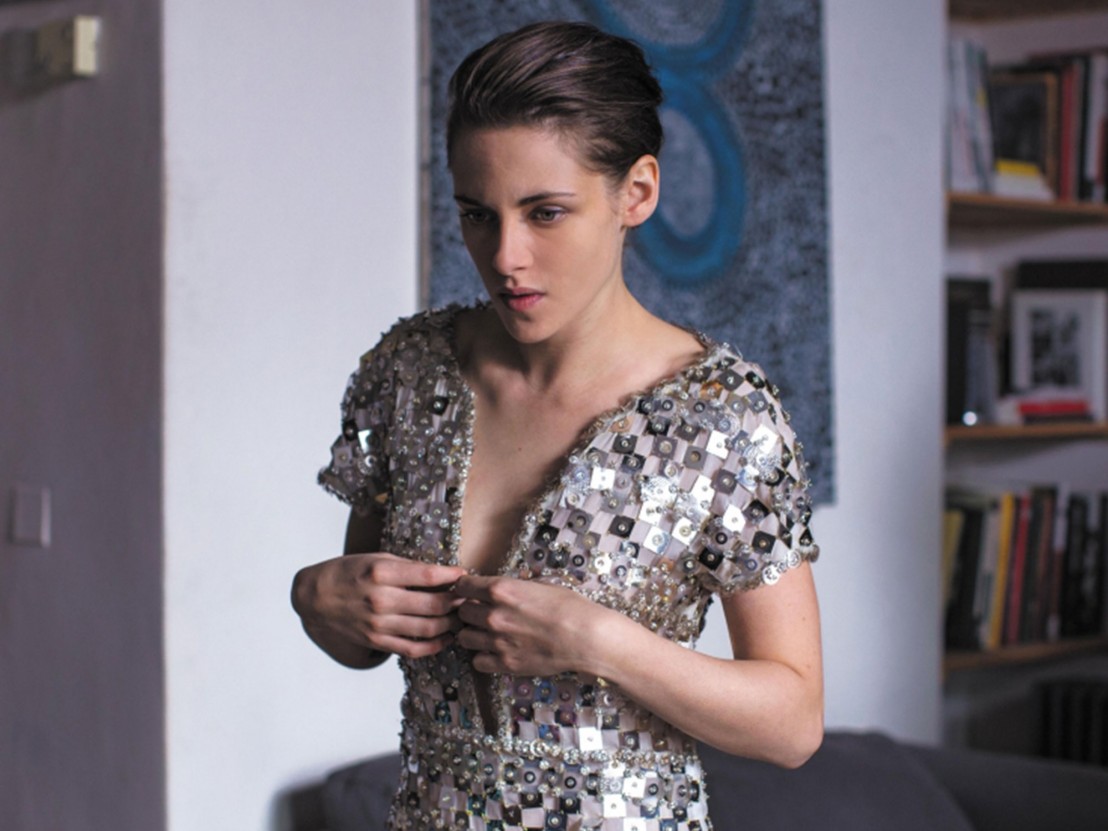 How the hell did this movie get made? We pose this question in genuine awe, with absolutely no hint of back-biting consternation. To call it a rough diamond is too conventional an assessment, and would also infer that we have any real inkling as to what the base materials of this thing are. Occasionally it’s a genre movie, then it’s a study of grief, then a satire, then a murder mystery, then a Hitchcockian thriller, and sometimes it manages to be all that and more in the very same moment. Just as its heroine, Maureen (Kristen Stewart), secretly dresses up in the haute couture of her celebrity paymaster in an attempt to “become someone else,” this is a complex experimental movie which masquerades in an eye catching garment emblazoned with silver-spangles and which boasts a deep, plunging neck-line.

A congenital heart defect takes Lewis to an early grave, while his twin Maureen dedicates her life to finding closure as a way of taking the edge off her suffering. As the lore of supernatural fiction would have it, she also possesses extra sensory perception and can see through spirt portals at certain moments. Camping out in her brother’s big, old, windy house, she waits for a connection, a sign, anything that allows her to charge forward. When not hunting ghosts, she traverses the Parisian boulevards, selecting clothes and accessories for her revolting boss, Kyra (Nora von Waldstätten). Assayas’ intention is show how these two, seemingly disparate spheres can subtly, movingly overlap.

Stewart is the lifeblood of this film, and it’s her minutely calibrated and determinedly serious performance that brings it bounding to being. She is able to make you believe that someone could actually live a normal existence with these hidden powers. But also, that they would irrevocably alter your perception of normality. Suddenly, banal exchanges become loaded with malice and simple communication takes on an eerie dimension. An instant-messaging tango between Maureen and an unknown party is framed as a dialogue with a spectral presence, perhaps benign, but probably not. As fickle as it sometimes may seem, Stewart always appears as if she has a complete understanding of the material and its intentions, and channels this through ever small gesture.

Assayas, meanwhile, taps a wellspring of thought on forms of communication, using the film draw parallels between 19th century drawing room seances and Skype calls. In Personal Shopper, death is just another form of alienation, a physical remove from a person we once knew. Words themselves come under close scrutiny, and Assayas asks if we can ever truly connect with another person if we’re not standing right in front of them and communing fully with the senses. The incessant buzz of a smartphone becomes an attention-grabbing scream from out of the ether.

All that said, the film is far more enjoyable to think about and dissect than it is to watch. The tonal shifts are purposely attuned to frustrate, and the task of deciphering where things might go next occasionally draw attention away from the film’s obscure emotional core. It’s scary but it’s not a horror film, and it’s philosophical without ever coming across as a “meaningful” art-house drama. It could be a film about being Kristen Stewart, a person who in real life casually hops between worlds, taking on new guises which help her to experience new emotions. It initially seems like a very different film to Assayas’ beautiful previous, Clouds of Sils Maria, but eventually you might chose to see this one as its dearly departed twin, trapped in limbo for all eternity.