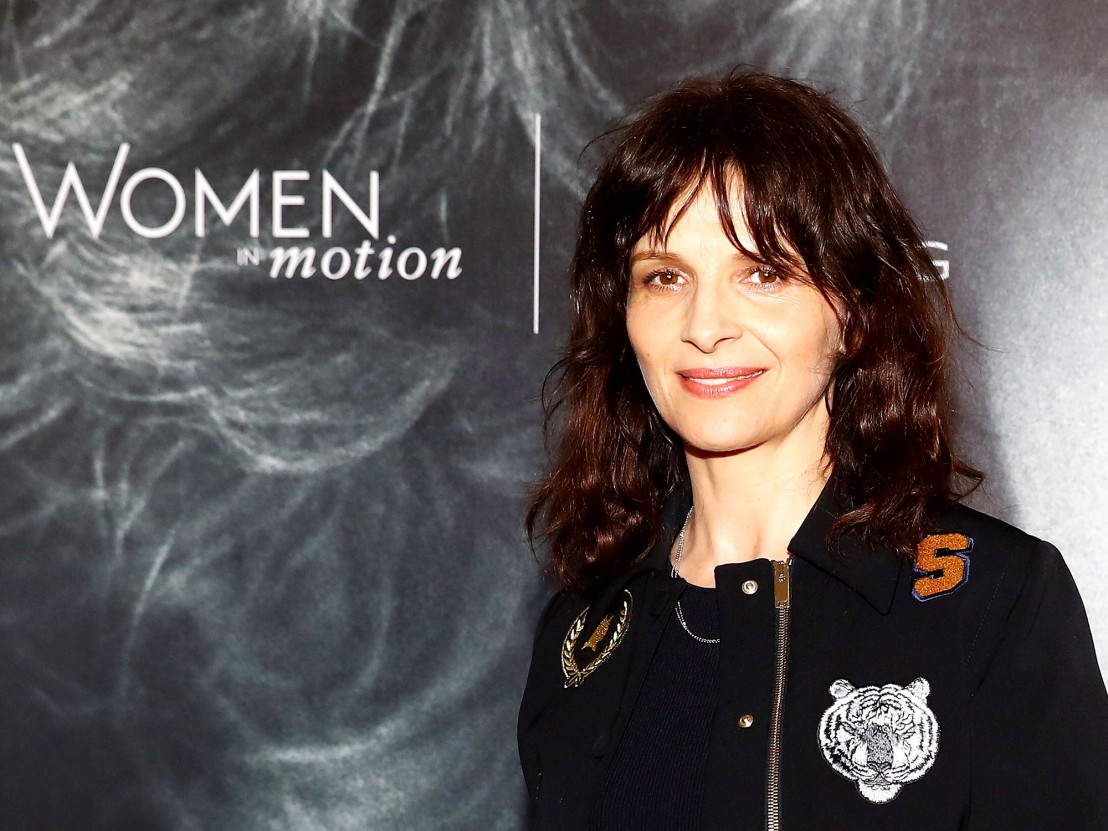 It’s hard to keep the conversation about gender representation in film fresh. Bringing art to activism is a question of being more creative than simply trotting out the party line, repeatedly, until death. Trust Juliette Binoche – the Palme d’Or and Oscar-winning French actress, who has worked with art-house dons like Jean-Luc Godard, Michael Haneke, Hou Hsiao-Hsien, Abbas Kiarostami and Krzysztof Kieślowski, not to mention, turned Steven Spielberg down three times – to offer a spirited and inclusive take on achieving gender equality.

“It’s not about only women,” said Binoche, speaking at a Women in Motion talk at this year’s Cannes Film Festival, “It’s also awakening the need in men to talk about the feminine, because the world, the way it’s happening, it feels frightening. We need to open up to another layer of the self, which is another way… the concept of life, the feeling of life, feeling another space inside us.”

Showing confident fluency at communicating abstractly about the deep forces at work inside us, Binoche continued: “I believe that the two poles – the masculine and the feminine – are in each of us. The first impulse to come to life is something about masculinity: conquering life, conquering the world, but you have to have equilibrium between those two poles. You have to relax, you have to allow another layer of yourself, and it means somehow the drive has to go down, the need of possession has to go down, the need of power has to go down. It’s a sort of a humility space you’ve got to find.”

It was exhilarating to hear that Binoche has been expressing these views to some of the world’s most powerful and influential male directors. She explained how she challenged Spielberg and Scorsese over their lack of female protagonists, confiding and lamenting that: “Scorsese has a very feminine side of himself. For me, he didn’t explore his feminine side.”

While Binoche’s words may not have had a demonstrative effect on the way those two movie giants do business, she claims to have had a direct impact on the French director, Olivier Assayas, who is in Cannes again this year with Personal Shopper, and who came to Cannes in 2014 with Clouds of Sils Maria, starring Binoche opposite Kristen Stewart. “I phoned him [Assayas] and said, ‘You’re a lover of Bergman, who thought about women in the most beautiful ways. Why don’t you write for women?’ And he did. That’s why we made Sils Maria.”

The thought of Binoche barrelling around the film industry, calling out male dominance by channelling feminine ideas and language choices is deeply cheering. A lot of who she is today steams from a bold early decision to turn down Hollywood, in order to stay living and working in Europe. “My first agent said to me, ‘If you want to work internationally then you have to move to America, and live in Hollywood.’ I thought, ‘No. It can’t be.’ Somehow, I knew that I had to step away from this system. Being independent is the most important thing, because then you can be really free. If you belong to a system you have the rules of it. I think as a free spirit you have to be smart enough to say, ‘Yeah, I get in, but I go out because I don’t belong to anybody: just myself, and my trust, and what life is to me.’

“The work to be independent, the work to be an individual is your responsibility as a person – men and women – and not belonging to a system that’s going to tell you what to do, ruling your spirit and ruling your way of making your dream true.”

Bincoche described a kind of a balance between choosing meaty, complex roles and using more conventional work as an opportunity to push her ideals into a new space. “Saying ‘no’ to certain films is as important as the ‘yes’ because it really defines you but I have to say that lately I’ve done a science-fiction film [Ghost in the Shell]. It’s a very male-orientated film, but I had the occasion in it to fill up some feminine emotions and I jumped into it, because I felt that this is at least a little bit of a door that I can get in and say, “Hey! By the way… feel, have emotions, be connected.”

Juliette Binoche was present to promote her membership of We Do It Together, a new nonprofit production company, founded by Chiara Tilesi, which makes films about women for women. Three other members were also present and speaking brilliantly: Tilesi, director Patrica Riggen and producer Marianne Slot. Other members of this impressive-sounding team include Queen Latifah, Jodie Foster, Jessica Chastain, Haifa Al Mansour, Marielle Heller, Amma Asante, Ziyi Zhang and Robin Wright.

The We Do It Together talk with Juliette Binoche, Patricia Riggen, Marianne Slot and Chiara Tilesi took place on 15 May at the Cannes Film Festival.