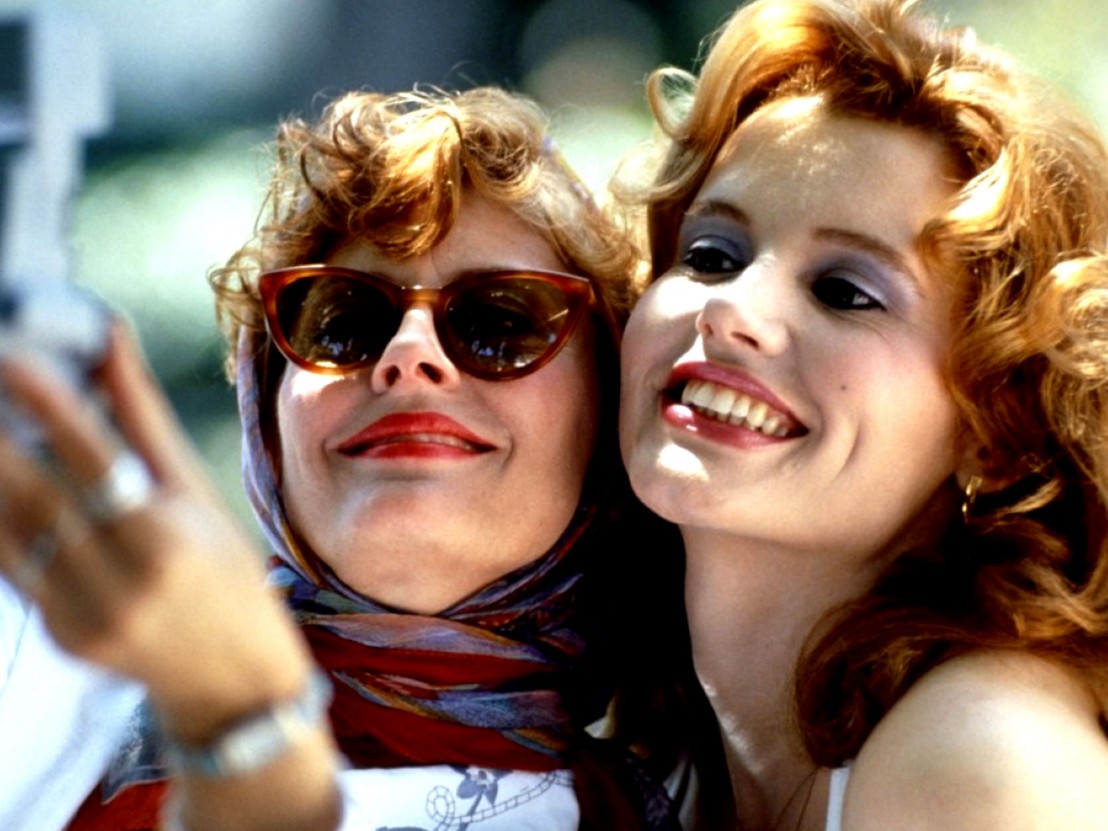 The American press proudly dubbed 1992 the ‘Year of the Woman’: Anita Hill stood her ground at Clarence Thomas’ confirmation hearings; four women were simultaneously elected to the US Senate; and a female scriptwriter won an Oscar for her first original screenplay. Callie Khouri penned Thelma & Louise, a road trip story about two women who kill a would-be-rapist and subsequently go on the run, in 1988. Directed by Ridley Scott, the film has since become a classic, especially striking a chord with female viewers thanks to its strong representation of women and playful undermining of a male-dominated genre.

“If The Witches of Eastwick marked a turn against faltering feminism,” proclaimed the Washington Post in their review, “Thelma & Louise signals the end of the detour.” It was thought that the incendiary and powerful nature of the film would usher in a new era for Hollywood, one where gender inequality and pay gaps were no longer an issue. So why is it that, 25 years on from the release of Thelma & Louise, so little has changed?

Thelma & Louise was a welcome twist on the predominant themes that shaped much of American cinema in 1960s: the buddy picture, the road movie, and the common outlaw. Films like Easy Rider, Midnight Cowboy and Butch Cassidy and the Sundance Kid were anti-establishment pictures that gave a platform for men to challenge and subvert societal expectations. Women had to wait another 20 years for their chance.

Like their male counterparts in the ’60s, Thelma and Louise are allowed to get away with their rebellious actions. For the first time in mainstream cinema, female characters were getting a taste of the action. The freeze-frame climax essentially sees our protagonists send a big fuck you to all the men of the world – not just the truck driver who gawked and hounded them and the rapist bar thug, but also paternalistic do-gooders like Harvey Keitel’s saviour cop. Although often misread as an unhappy ending, the film’s classic final scene is in fact the ultimate send off for Thelma and Louise; they are finally liberated, and no longer will men make their decisions for them.

Audiences could be forgiven for believing that Thelma & Louise was just be the beginning. Surely Khouri and Scott’s film was an example to follow; it was a box office success (making almost $50m in the US alone) that flouted the age-old paradigm that says ‘women don’t sell’. The film came out at a time when gender inequality was a hot issue in Hollywood, and unsurprisingly the view then was that more female buddy movies would follow. But what happened next was sadly all-too predictable.

In 2016 the gender equality gap in Hollywood looks much the same as it did in 1991. Domestically women account for just 22 per cent of the protagonists and 34 per cent of the major characters in the top 100 grossing films. As Reese Witherspoon pointed out at the American Cinematheque Awards in October 2015: “Women make up 50 per cent of the population, and we should be playing 50 per cent of the roles on the screen.”

These statistics may represent recent historical highs, but they are still a long way off Witherspoon’s suggestion. Since 2002 there has only been a seven per cent increase in female major characters, and only a five per cent increase in female speaking characters. This achingly slow progress will only speed up when there are more women behind the camera, and more women writing female characters. Sounds like a no-brainer, right?

In the early ’90s female action heroes like Thelma and Louise, Ripley and Sarah Connor were breaking the mould, smashing down patriarchal barriers. It’s frustrating, then, that after 25 long years these iconic characters are still the exception. Thelma and Louise left the scene the moment they drove their ’66 Thunderbird into the Grand Canyon, and into an immortalised world of feminist liberation. Somewhere along the line, their message has become diluted and lost. Hollywood has stayed behind, peering into the abyss, too afraid to make that final leap.