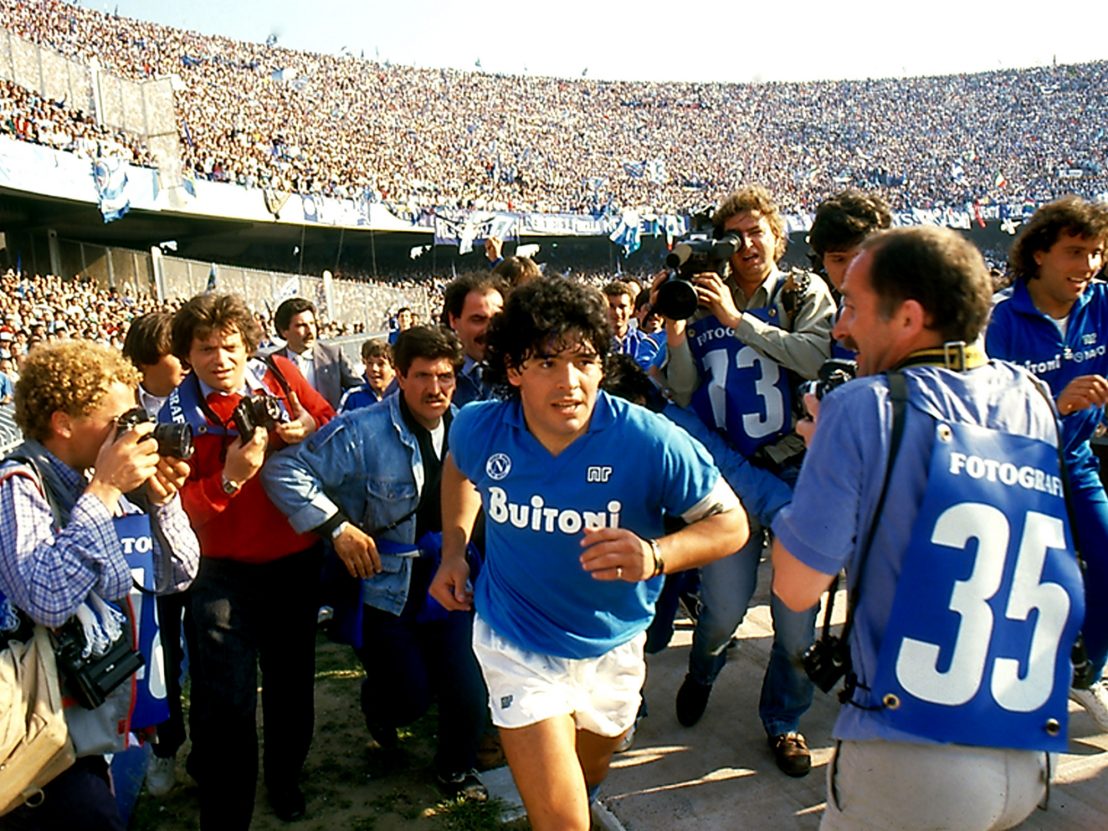 The team behind Amy and Senna tackle the highs and lows of a controversial footballing icon.

At the 2018 FIFA World Cup, all eyes were on Diego Maradona. Not for footballing reasons – those glory days passed a long time ago. No, the diminutive Dios was up to his old tricks in a different sense, dancing in the stands, taking selfies with supporters and entering a state of demonic euphoria whenever his beloved Argentina scored. Memes and ‘Funniest Moments!’ YouTube compilations were churned out quicker than you could say “Hand of God”.

But there was another side to Maradona’s Russian hijinks. Throughout the tournament he appeared to be binging, quite indiscreetly, on drugs and alcohol. (Which is presumably more or less what football’s global governing body bargained for when they agreed to pay him a reported $10,000 per day as a FIFA ambassador.) On the BBC, Gary Lineker earnestly suggested that his old pal was in danger of becoming a “laughing stock”, apparently having not received the memo that that horse had not only bolted but was currently en route from the glue factory to Maradona’s private box.

On a more serious note, at the end of Argentina’s group stage defeat of Nigeria Maradona was filmed raising two middle fingers at opposition fans, and before that was spotted making an alleged racist gesture towards a group of young South Korean supporters. The saddest part of all this was that his behaviour, which could favourably be described as erratic but was basically detestable, came as no surprise. So how did we get here? How did the most gifted and idolised footballer of his generation become a figure of ridicule and contempt?

Attempting to unpack some of the hows, whys and what-the-fucks of a colourful and controversial career, director Asif Kapadia pinpoints a specific date: 5 July, 1984, the day Maradona was unveiled in front of 85,000 delirious Neapolitans having recently completed a then record transfer from FC Barcelona to SSC Napoli. Back then Naples was one of the poorest cities in Italy and its men’s football team had never won the Serie A title – but all that changed within the space of a few delirious seasons thanks to their quicksilver number 10 and some wider socioeconomic factors Kapadia doesn’t bother to go into.

Drawing on hundreds of hours of archive material and newly recorded interviews with former teammates, journalists, friends, partners and Maradona himself, the film builds a detailed picture of a supremely talented, deeply flawed individual. Most poignantly, it establishes an internal conflict between ‘Diego’, the shy, insecure boy from the slums of Villa Fiorito on the outskirts of Buenos Aires, and ‘Maradona’, the superstar whose worst tendencies were indulged by the Camorra, southern Italy’s biggest organised crime syndicate.

Hero, villain, liar, cheat, champion, scoundrel: this hugely entertaining snorts-and-all biography reveals Maradona to be all these things and more. Yet disappointingly it only lightly scrutinises his choices off the pitch. More than a misguided maverick, Maradona is portrayed as an essentially decent bloke who through very little fault of his own became corrupted by those seeking to exploit his supernova celebrity. It’s all rather oversimplified and unpersuasive.

Kapadia’s film sticks to the same ‘tortured genius’ narrative template he employed to varying degrees of success in his two previous feature documentaries, Amy and Senna – the obvious difference being that Maradona is very much alive and kicking (well, not so much the latter). A clip of him welling up on Argentinean television in 2004 is genuinely sad to see, but its inclusion here feels redundant in light of Maradona’s subsequent conduct. Ultimately it’s hard to measure the price of fame and greatness while convincing your audience of your subject’s tragic fate when, as evidenced last summer, he’s still out there living his best life.