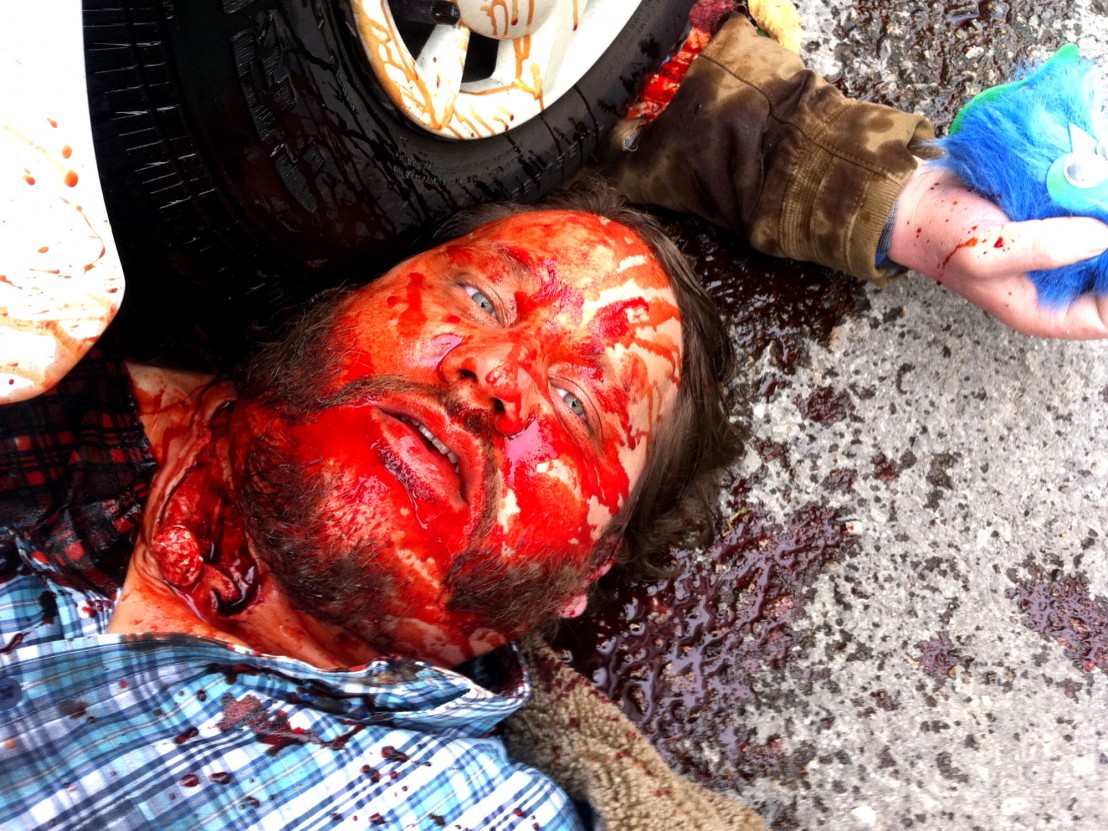 There’s a grisly early scene in High-Rise that provides a stunning counterweight to the film’s weirdly serene set-up, where Tom Hiddleston’s Dr Robert Laing becomes acquainted with the tower block that will later consume him. With a short, sharp shock, the scene exhibits body horror at its best: wince inducing, stomach churning and wholly mesmerising.

The deconstruction of the physical form is a prominent trope in director Ben Wheatley’s work – few filmmakers working today do it better. The nightmarish tone of Kill List, for example, is knitted together with moments of grim uncompromising violence, culminating in the devastating ‘hunchback’ scene. Similarly, corpses punctuate Sightseers: one with a caved-in face, another with a ripped-open throat.

In this sense body horror fulfils a blackly comic purpose reminiscent of Monty Python and the work of Sightseers’ executive producer, Edgar Wright. In Wheatley’s A Field in England there is a transcendent element to the gore as the film switches from the cerebral to the physical during its violent finale. A leg is shattered and a head is blown apart in gratuitous black-and-white slo-mo, making the preceding psychedelic odyssey suddenly feel disturbingly real.

Wheatley’s proficiency when it comes to practical effects is rooted in his TV background, notably as creator of The Wrong Door, a surrealist comedy sketch show that featured plenty of CGI and physical effects. According to Dan Martin, Wheatley’s regular prosthetics supervisor, the director is well-versed in the practicalities of body horror. “It’s a nice luxury to have a director that knows enough about this stuff that you can talk to them on a technical level,” he says. “I like to turn up to set with enough room to give him options [for an effect], so that he’s not restricted to what he chooses on the day.”

Martin reveals that pre-production conversations with Wheatley take in a range of inspirations, including films, books and paintings. In the case of that early scene in High-Rise, Wheatley referenced ‘With Dead Head’, a notorious photograph from 1981 of a young Damien Hirst posing with a real severed head in a morgue. The scene goes a long way to capturing the perverse and macabre quality of the image, even using an actor who resembles the head in the photo. “We brought on a pathologist to help with that scene, checking the anatomy at every stage to make sure it was realistic,” recalls Martin. “There was a very satisfying audible reaction from the people on set the first time we did it.”

Wheatley first hired Martin in 2011 to work on a short he was making for FrightFest, a zombie-infused homage to John Carpenter’s Assault on Precinct 13. Since then he’s been at the heart of a clique of cross-collaborating British horror directors. Last year he provided prosthetic effects for Aaaaaaaah!, an absurdist, low-budget film produced by Wheatley and written and directed by Steve Oram, the star and co-writer of Sightseers. Martin’s work on Aaaaaaaah!, which imagines a world where humans have regressed to an ape-like state, included creating a selection of fake genitalia – a task he also performed on A Field in England for a scene featuring a diseased, warty appendage. “I’ve made a lot of penises in my career,” he sighs.

Expect more gore (but probably no phallic monstrosities) in Wheatley’s next film, Free Fire, which is due out later this year and is a marker of Wheatley’s rise up the Hollywood food chain –Martin Scorsese is exec producing and the impressive cast includes Brie Larson, Cillian Murphy and Sam Riley. It is also the director’s first feature set outside the UK, depicting a shootout between two gangs in a Boston warehouse in 1978. “It has some horrible moments in it,” confirms Martin, who was given limited time to work with the cast to create their prosthetics before shooting began in summer 2015.

Martin is philosophical about the merits of body horror, conceding that in some cases it becomes gratuitous and devoid of artistic value (his other credits include The Human Centipede 2, which he believes was done a disservice in the editing process). Regarding Wheatley’s work, though, he is confident in the rationale behind the revulsion. “The thing about Ben’s horror is that although a lot of it is rooted in the destruction of the human form, it doesn’t wander into that more voyeuristic, sadistic area of horror that’s quite common in the post-Hostel landscape.

“There was a weird shift around that time when horror directors stopped saying ‘Look at this, isn’t it appalling?’ and started saying ‘Look at this, isn’t it amazing?’ There’s a sort of mean-spiritedness that comes out of that that I’m not particularly keen on, where you’re invited to revel in it rather than be horrified. I don’t think Ben does that.”